In addition to the aftermath of Bhopal's catastrophic gas leak of 1984, severe contamination of water and soil has taken its own toll on citizens. At a Greenpeace organized November 2004 symposium, experts put the cost of cleanup in the range of Rs.135 crores. K Rajani Priya looks at the possibilities.
01 December 2004 -

If the immediate aftermath of the Bhopal gas tragedy of December 1984 was catastrophic, the later years took their own toll on the local people because of the accumulation of toxic chemicals at the Union Carbide factory. Of the many lacunae the tragedy brought to light, one was that lack of proper information and emergency preparedness and application of knowledge about toxicology as well as disaster mitigation measures had led to more chaos and high casualties. Overall the tragedy exposed the apathy of the government. Also, Union Carbide India Limited which had washed its hands off of cleanup responsibilities has since then taken over by Dow Chemicals.

After the devastation the factory was closed and the site is now secured with a fence and a wall with security though it is easily accessible to public. The walls of the abandoned plant have remained as witnesses of the major catastrophe. The plant is still in a state to extend its poisoned bite through its toxic remains. 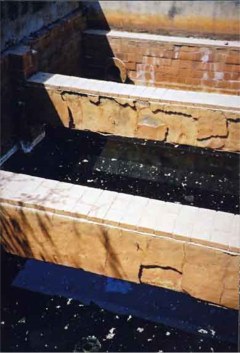 The areas surrounding the factory are inhabited with settlements of thousands of people. Children play and livestock graze on grounds which were used to dump waste by UCIL. They were not rehabilitated. Citizens also did not get enough compensation and economic relief to abandon the surroundings of factory and move elsewhere. The closed factory became a part and parcel of their lives. People have remained in agony and frustration but locked in an ongoing legal battle.

The stockpiles present in this site contain toxic chemicals and direct contact of people with these contaminants has remained a great concern. Toxic chemicals present in the asbestos roof and the walls of the factory exceed safety standards. The abandoned factory is scattered with sacks of pesticides and chemicals in a decaying state. Many metal boxes labeled Sevin contain nitrate residues. Multiple sources have put an estimate of approximately 25,000 tons of contaminated solid material present at this site.

The soil has become contaminated and barren; there is no indication of the growth of grass. Many government and non-government agencies had conducted laboratory analysis of the soil and water samples taken from this area and found that contamination is present beyond permissible limits. Surface soil is contaminated by residues of pesticides such as hexachlorocyclohexane, sevin, naphthol, and mercury. 10 years ago, the National Environmental Engineering Research Institute (NEERI) reported that the plant has recorded with high concentrations of semi-volatiles such as Temik, Sevin and Lindane at higher depths of at least 60 cm from the ground. Analysis conducted by Greenpeace research laboratories in November 2002 revealed that stockpiles and soil from solar evaporation ponds contain Carbaryl and Benzene hexachloride (BHC) in every sample.

People residing in the vicinity are using the contaminated soil for construction of houses by. They also use the abandoned plant as public toilet. The solar evaporation ponds in the factory were used to store wastewater with high concentrations of inorganic chemicals. After heavy rainfall, water leaches into subsurface and contaminates the groundwater. This is what had happened in the site. Solvents and heavy metals have contaminated groundwater. Though municipal tankers are supplying drinking water, insufficient supply has forced the people to use hand pumps that give access to polluted groundwater.

The BBC in its visit to Bhopal reported, "It had levels of contamination 500 times higher than the maximum limits recommended by the World Health Organization". The poisoned water, contaminated soil and toxicity became a part and parcel of peoples lives and the victims of Bhopal gas tragedy describe the place as Living poisoned Daily.

Apart from medical relief and compensation matters, legal liability to clean up the site also became a major controversy and has drawn worldwide attention. The Bhopal call for justice has gotten worldwide support. The environmental activism of Champa Devi Shukla and Rashida Bee won them recognition recently. The two women were awarded the prestigious Goldman Prize in the United States. Still, after 20 years, a major resolution on who has to clean up the site and bear those costs has not happened.

According to the law of the land, Hazardous waste Management and Handling rules 1989, UCIL was responsible for the production of wastes and is responsible for its cleanup. However, Union Carbide Corporation has denied responsibility arguing that it had sold its shares to Eveready India Limited and also the land has become a custodian to government, and as such it is in no way responsible for cleanup action.

The land with the machinery and factory was surrendered as such after the devastation with out any remediation.

However, as per the terms of the lease of the land, the site is to be surrendered in a usable and habitable condition, which UCIL did not do. Under the Environment (Protection) Act, 1986 and the Water (Prevention and Control of Pollution) Act of State Pollution Control Board, UCIL is legally liable as the toxic wastes are still contaminating the land and water.

Cost-effective techniques for cleaning up the toxic site at Bhopal are available. A November symposium of experts at Bhopal looked into this.  •  Persistent and tenacious struggle
•  Recognition for campaigners

A government estimate put the cost of cleanup at Rs.100 crores (1 crore = 10 million) and the idea was dropped because of high expenditure. At a November 2004 symposium organized by Greenpeace, an international team of experts estimated the cost of the cleanup will be around Rs.135 crores. They recommended that the disposal of stockpiles, dismantling of the remaining building and decontamination of the soil and ground water must be done at international standards in a timebound and safe manner.

At the November meeting, experts proposed thermal desorption or microbiological treatment techniques for affordable remediation. Remediation can be done by so many methods, but these two are the most useful techniques that yield good results and cost-effective.

Thermal desorption removes harmful chemicals from soil, sediment and other materials. In this method, heat is used to change chemicals into gases. These gases are collected by special equipment and again changed back into liquids or solid materials and disposed off safely. The clean soil after cools returned back to the site. When compared to other techniques like incineration, it is safe as gases are not emitted into air and the soil also becomes clean. Moreover, this technique is cost-effective and fast. It cleans over 20 tons of soil per hour depending on the pollution levels and the condition of the soil (wet or dry).

Micorbiological treatment is also termed bioremediation technique. It uses microorganisms to degrade or break organic chemicals present in soil, sediment and sludge under the conditions of their growth like presence of oxygen (aerobic), with out oxygen (anerobic) and nutrients etc. Bioremediation techniques already solve problems in waste management.

Backfilling of the decontaminated site and landfilling the solar evaporation ponds are also important short-term goals for cleanup. Backfilling is a simple technique generally used in mining processes to reclaim a mine area. It is also used in places where the surface has been dug up for construction purposes or excavated for extraction of minerals. Backfilling is done by the waste rock that is left, overburden, and construction or excavated material. For Bhopal, the solar evaporation ponds may be cleaned up by drying up the ponds and landfilling with a proper lining.

Monitoring the contaminant emissions from the site in view of the safety and health of the people is a prime objective. It is believed that 4 years of time will take for the complete cleanup of the site. Low-risk, innovative and state of the art technologies must be adopted.

Responding to pending litigation in the United States, the Government of India did send a no objection certificate for cleanup action to be adjudicated by a New York district court. This has opened the door for the US judiciary to possibly affix responsibility on Dow Chemicals for cleanup, thus reopening the legal liability case.

This month various media reported that a Union Minister has said that Engineers India limited will take a survey for the estimation of contaminants present in the site. The government has stated no objection to the cleanup of the site and dismantling of the factory. The government is also reported to be waiting for the ruling of the US court.