What Chernobyl and Fukushima remind us

On the 30th anniversary of the catastrophic nuclear accident in Chernobyl, one can ignore the lessons – as well as those of the Fukushima plant, only at our peril, writes Darryl D’Monte.
29 April 2016 -

Greenpeace commissioned scientists and experts to bring out a report this March titled Nuclear Scars: The lasting legacies of Chernobyl and Fukushima.  They reviewed the scientific literature on these two accidents and radiation experts did field studies to examine the radiation, health hazards and environmental damage they caused.

As with Bhopal in 1984, there is no conclusive number of deaths in the aftermath of either nuclear accident. The World Health Organisation (WHO) reported that there were 9,000 additional fatalities after Chernobyl. But Greenpeace cites a Belarus scientist who predicted based on radiation exposure calculations that there would be 90,000 excess cancer deaths in countries contaminated by the accident.

One of the Greenpeace report’s  main findings was the lack of consultation with the victims of the two accidents and to establish what degree of risk they were ready to accept these many years later. Their human rights were violated and the nuclear industry was attempting to avoid the full costs of rehabilitation.

In an article titled Nuclear Waste Pollution is an Existential Risk that Threatens Global Health in the website Transhumanity.net in April, Margaret Morris cites the philosopher Nick Bostrom. Writing about “Existential Risks”, published in the Journal of Evolution and Technology, he asserted: “Our future, and whether we will have a future at all, may well be determined by how we deal with these challenges.” 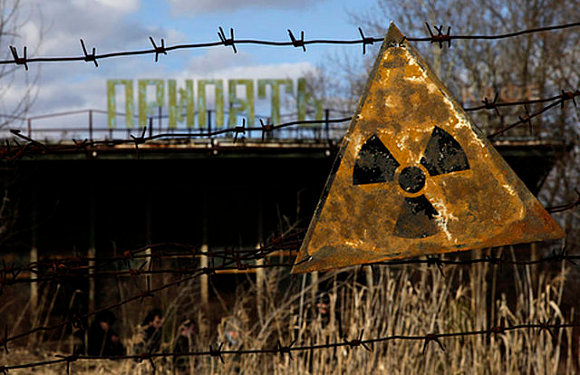 Hundreds of thousands of people have been permanently displaced by Chernobyl and Fukushima. The United Nations Special Rapporteur to the Human Rights Council, Anand Grover, who is based in Delhi, has said that Japan’s evacuee return policy is not “in consonance” with the human right to health. He has also stated that the return of evacuees should only be “when the radiation dose has been reduced as far as possible” below the permissible limit.

In both locations, the health impacts have been extensive. Morris points out the dangers of just one radioactive material – Plutonium 240 or Pu-240. It has a half-life – meaning the time it takes for the radioactive decay to decrease by half – of 6,560 years.

According to a 1975 article in New Scientist, “If it is inhaled, 10 micrograms of Pu-239 is likely to cause fatal lung cancer.” Experts estimate that Pu-239 is so noxious that only one pound would be enough to kill everyone on the planet if it were so evenly dispersed in the air that everyone inhaled it.

The lesson to be learned, but isn’t, is that Pu-239 is a by-product of generating electricity from nuclear reactors, as well as from producing nuclear bombs. As of 2014, there were 435 nuclear power plants in 31 countries around the world.

According to Morris, “Some of these weapons are 35 years old, but have a shelf-life of only 25 years. These aging weapons are undergoing corrosion, oxidation and other detrimental changes, and they must constantly be maintained and upgraded to prevent them from becoming an imminent threat to life on earth. They are primary war targets. The situation emphasizes the need for absolute global peace.” By some reckoning, India and Pakistan, both nuclear powers, can prove the most dangerous flashpoint in the world for this very reason.

As part of the US weapons programme between 1944 and 1988, a staggering 114 tonnes of Pu-239 were produced in nuclear reactors at the Hanford Works facility, in Washington state, and at the Savannah River Site in South Carolina.

Hanford stores about 50 million gallons of high-level radioactive nuclear and chemically hazardous wastes in underground storage tanks that were not designed for long-term storage. Roughly a third of these tanks have leaked, so that at least a million gallons of radioactive waste has reached the natural environment.

Hanford is the most toxic site in the U.S., and among the most toxic places on earth. Over 1,000 contaminated sites at Hanford have been identified. Groundwater aquifers are polluted for over 200 square miles beyond. The US alone stores tens of thousands of tonnes of spent fuel containing Pu-239 and other highly radioactive materials from the various reactor cores.

Following the earthquake and ensuing tsunami in Japan in 2011, high levels of Pu-239 were released into the atmosphere and the ocean from the Daiichi nuclear power plant at Fukushima. The radioactive plumes circled around the earth every 40 days and contaminated the Pacific ocean, its marine life and many cities beyond. Morris writes that the ocean-borne plume is likely to reach the US coast, carried by currents, by 2017.

As an accident, Chernobyl released ten times more radioactive material than Fukushima. According to the WHO, it was 200 times greater than the impact of the atom bombs at Hiroshima and Nagasaki. It was a combination of human error and design flaws that caused two quick explosions in one reactor at the plant. This is similar to what occurred two years earlier in Bhopal – the world’s worst industrial, as opposed to a power plant, accident.

Ukraine, Belarus and Russia, then all still part of the Soviet Union, received the most radioactive fallout. But all of Europe was affected at a lower level, with Scandinavia and the Alps worst hit. The authorities cordoned off a 30-km belt around the plant.

The main contaminant was radioactive iodine, which causes thyroid cancer, particularly among children, and Caesium-137, which passes through the food chain, affecting milk, fish and other products. According to the intergovernmental International Atomic Energy Agency, caesium has contaminated 13,000 sq km in the Fukushima prefecture.

As Greenpeace reports, “The Chernobyl disaster caused irreversible damage to the environment that will last for thousands of years. Never in human history has such a large quantity of long-lived radioisotopes been released into the environment by a single event.”

It has enormous financial consequences for Ukraine, which is a poor country. Since its independence in 1991, it has spent $10 billion to mitigate the impacts of the accident, while neighbouring Belarus has spent almost twice as much. Ukraine no longer has the funds to protect its people from the continuing danger, putting its people at risk.

Thirty years after, more than 10,000 sq km of land is still unsuitable for any economic activity and 5 million live in zones officially considered to be radioactively contaminated in Ukraine, Belarus and Russia. Much of the western media which has been reporting the long aftermath of the accident on its anniversary show an iconic picture of a doll abandoned in a wreck of a home.

Caesium-137 traces have declined in some agricultural products, but still are detected in wild mushrooms, berries and meat of wild animals which continue to remain part of the local population’s diet. Greenpeace tests confirmed the presence of these elements. As one old mother told a western journalist, the contamination isn’t visible, so why worry about it. Every survivor interviewed by the media, however, can recount a list of his fellow residents who are no longer living.

The Economist carried an article on April 26 which is a chilling reminder of the horrific consequences of nuclear power accidents. It was titled: “A nuclear disaster that brought down an empire: Chernobyl led to thousands of deaths, including that of the Soviet Union”.

The town of Pripyat near the station is eerily being reclaimed by forests. It is deserted except for tourists. The journal terms it a “Soviet Pompeii” and indeed reminds one of the hubris with which the Soviet Union plunged headlong into a massive investment in nuclear power plants and nuclear-powered weapons and submarines. That Russia continues to provide nuclear technology to India should remain a major cause for concern.

The last Soviet leader, Mikhail Gorbachev, recalled years later that the meltdown of the power plant “even more than my launch of perestroika [restructuring of the economy], was perhaps the real cause of the collapse of the Soviet Union five years later.” That should be a sobering thought to all votaries of nuclear power, which remains the biggest threat to the world’s environment as a single or a chain of events or accidents, as distinct from a long-term process like climate change.

In many ways, as much as the accident itself, the tragedy of Chernobyl was the initial attempt to put a lid over it. The first reports emanated from Sweden, where radioactive traces were detected. Firefighters from Kiev were trying to douse the fire, receiving deadly dose of radiation while doing so. The decision to evacuate Pripyat was made on April 26 evening and it was only a full two days later that the government issued a terse 15-second statement on the evening news: “There has been an accident at the Chernobyl nuclear power plant.”

It was Gorbachev who later decided to set the record straight and this set in motion a set of consequences – with glasnost or openness -- that led to the disintegration of the Soviet empire. This is a grim reminder of the dangers of entering into a Faustian bargain by exposing human beings to the most toxic substances known in an elusive exchange for energy.