The poisons we play with everyday

From the paints in our homes to the discarded CFL tubes, the sources of toxic chemicals that pose a serious threat to our health and safety are omnipresent. Darryl D’Monte highlights why it is imperative for India to move faster and more determinedly in tackling this problem.

Despite warning signals all around, not least in the burgeoning increase in people contracting cancer, the threat to our health and safety from toxic chemicals is little understood.

At a workshop in Delhi on 24 February 2016 organised by the NGO Toxics Link, Lesley Onyon, Regional Advisor, Occupational Health and Chemical Safety from the World Health Organisation (WHO), outlined how such chemicals currently have a global turnover of $2.4 billion, which is estimated to double by 2030.

Globally, some 100,000 chemicals are commercially marketed, of which the EU accounts for a third. The American Chemical Society has registered as many as 50 million chemicals of all types. Three conventions govern the use of toxic chemicals:

The fact that these three conventions are named after European cities speaks for the fact that there is that much more awareness of this issue in the EU. 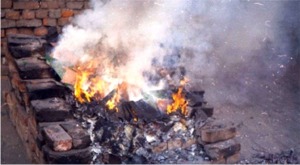 Ewaste and other waste being burned. Pic: India Together files

This is particularly after incidents like in 1976 in Seveso, near Milan, where an accident in a small chemical plant, belonging to a subsidiary of the Roche group, led to the highly toxic pollutant dioxin being released into the atmosphere.

Exactly a decade later, there was an accident at an agrochemical storehouse in Basel, Switzerland, which released tonnes of chemicals into the Rhine river. It was nicknamed “ChernoBasel” after the nuclear accident in Chernobyl that same year.

The situation in India regarding toxic substances is particularly problematic due to the abysmal lack of knowledge about them. One of the clear and present dangers is the presence of lead in paints.

Toxics Link had conducted a study of this sector in 2007. The Bureau of Indian Standards (BIS) imposed a voluntary restriction of 90 parts per million (ppm) of lead in paints.  Bigger companies are adhering to this, but small and medium enterprises are not. Even Nepal has made 90 ppm mandatory.

The US, EU and Japan banned such use of lead since the 1970s, which the WHO considers the number one contaminant, according to Ravi Agarwal, who heads Toxics Link.

Children are prone to such contamination because they are exposed within the four walls of a house. This can lower a child’s IQ by a tenth and there is no safe limit. However, the lead is totally replaceable and it is only added to increase the intensity of colours.

In the early 1920s, it ought to be remembered, when US oil and chemical companies and automobile manufacturers -- General Motors, Du Pont and Standard Oil of New Jersey (known nowadays as Exxon) -- wanted to add lead in petrol to stop engines from knocking, there were hardly any dissenting voices.

As a former head of the US Environment Protection Agency once told the US Society of Environmental Journalists, this single intervention was more responsible for retarding the mental growth of children throughout the world than any other.

The US began to phase out the use of lead from the mid-1970s but it took a full three decades for India to follow suit. Something as sensitive as the chemicals in plastics in feeding bottles and other uses is another cause for concern. The EU has banned the use of phthalates in these bottles.

One of the most toxic substances known in the world  is mercury. As children, many have played with these silvery, slippery globules when a thermometer broke. Considering that physicians often put such thermometers in the mouth of patients, this hazard is that much greater. It is a neurotoxin which can penetrate the skin, affecting the kidney and neurological system.

Hindustan Unilever Ltd (HUL) has just concluded an agreement to compensate workmen for the exposure to mercury in its Kodaikanal plant,  in the hills of Tamil Nadu. The plant moved there from the US. It imported mercury from the US and sold thermometers to the US and EU. But workers complained of ailments. The discovery of broken glass in the shola forests near the plant only added to allegations against the company. Greenpeace also weighed in, and the plant was closed in 2001.

According to the company, “HUL signed a settlement on humanitarian grounds with former workers on 4 March, 2016. The Hon’ble High Court of Madras took the settlement agreement on record. As part of the agreement, HUL, with an objective to ensure long term wellbeing of its former workers, has agreed to provide ex gratia payments to 591 workers/association members and their families to be used towards livelihood enhancement projects and skill enhancement programmes.” Now these conventional thermometers are being replaced by digital models all over the world.

India, as is well known, fares the worst when it comes to the presence of DDT in breast milk.  A few decades ago, when most countries hadn’t yet banned the use of DDT as a pesticide, environmentalists had a cautionary poster depicting a human breast with the catch line: “Milk in these containers is unfit for human consumption.”

With city after city in the country throwing up their hands in despair at the ever-increasing mountains of garbage – the mouldering pyres of Deonar in Mumbai being a classic instance – municipalities are turning to incinerators as the way out. Three are planned in Delhi.

However, there is the omnipresent danger of dioxin being left as a residue after incineration. Considering that India and other developing countries differ from others because rag pickers forage in such dumping yards, the authorities need to be doubly careful with such disposal systems.

Another source of toxic exposure is the disposal of light bulbs. The replacement of compact fluorescent lamps (CFLs) by light-emitting diode(LED) lights is compounding the problem of disposal of CFL tubes, which contain small amounts of mercury.

Toxics Link took the issue to the National Green Tribunal, which ordered the Ministry of Environment, Central Pollution Control Board and BIS to respond late last year. While officials have sought to downplay the threat, arguing that such lamps contained very little mercury, the NGO pointed out that a single gram of mercury could contaminate a one-acre lake.

Toxics Link has also been campaigning for the safe disposal of medical waste, which comes under the Basel Convention. Like organic and non-organic waste in households, such waste may be segregated in hospitals but is often mixed with other garbage at dumping grounds.

In 2009, there was an outbreak of hepatitis B in Modasa, Gujarat, in which 125 people were infected and 49 died. The reuse of contaminated needles and syringes were thought to be one of the causes. The danger of getting infected with HIV through this route is a terrifying prospect.

In Uttarakhand, medical waste has been emptied in the Mandakini river. In Bihar, bags of hospital waste duly separated in red and yellow bags, have been found on the roadside.

India alone administers 4.2 billion injections a year. There are medicines still remaining in the syringes and the syringes themselves need to be disposed off without the possibility of their reuse. As many as 60 per cent of the syringes being used – or, more correctly, reused – in the country are thought to be unsafe.

WHO and other organisations are working out simple and cheaper methods of disposing of medical waste in poor countries. It has held global competitions for such design, in which Indians have received an honourable mention. This includes the use of solar power to dispose of such waste effectively.

With such an overwhelming emphasis on “Make in India” and industrialisation, there is every reason to fear that the precautionary principle may be abandoned in the thrust to increase the growth rate. The “silent springs” of poisons seeping into our bodies  may well become a torrent in the process.