Criminals as leaders -- yet again?

Elections in Bihar move into the final phase today. Polling began on 18 October with the first of four phases. For a total of 243 seats in the State Assembly, 1607 candidates have been in the running. Of these, 446 candidates (nearly 2 competitors per seat) have criminal records. Varupi Jain reports.
19 November 2005 -

To most voters, it may no longer be news when they hear of the criminal credentials of candidates lined up on the ballot. But Bihar has been particularly notorious in this regard. Given that, the trends in criminal records among the candidates of the October-November 2005 Bihar assembly elections are something to watch out for. Elections in the beleaguered state move into the final phase today. Polling began on 18 October with the Election Commission running a four phase schedule. 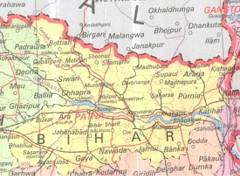 The Association for Democratic Reforms (ADR) is doing just that. ADR is an Ahmedabad based non-political, non-partisan group of professors of the Indian Institute of Management, Ahmedabad (IIMA), the National Institute of Design (NID) and alumni of IIMA. For the last 3 years, ADR has been working on improving governance and strengthening democracy in India, focussing on electoral reforms. ADR's main objective is to explore and address issues related to electoral reforms, Right to Information, greater transparency among those in power, empowerment of the ordinary citizen and reform of the government and bureaucracy.

ADR has been working closely with Loksamvad  a network of NGOs based in Patna. The NGOs monitor and report the situation in the field. ADRs Election Watches have repeatedly uncovered the dubious backgrounds of the candidates representing prominent political parties. For the Bihar Assembly Elections of February 2005, ADR reported that out of the 243 candidates who won, 42% had criminal charges against them and 2 even had rape charges.

For the current elections, a complete list of candidates, especially of those with criminal records, was published in full at the district level, says Professor Trilochan Sastry, one of the founding members of ADR and Professor at Indian Institute of Management, Bangalore. At least 23 candidates are women whose husbands all have criminal records  which may be a way to hide records of the candidates.

But there may have one 'desirable' outcomes of data release. Prominent politicians have refused to campaign for their party as a mark of protest against the level of criminalisation of their own party. For instance, Shatrughan Sinha refused to campaign for BJP in Bihar. L K Advani stated that BJP would not crown crooks as ministers. Also, in an interview, Sushil Modi, the BJP President in Bihar, simply could not defend his party. Additionally, many national level leaders have issued statements that those with criminal records, if elected, will not get ministerial positions.

According to Bibhu P Mohapatra of ADR, during the current elections, ADR managed to reach out to the voters in all constituencies. I am not sure if this would have an impact or not, but there was tremendous hunger for such information among the people. Most people were interested in knowing the candidates financial assets and loans, says Mohapatra. 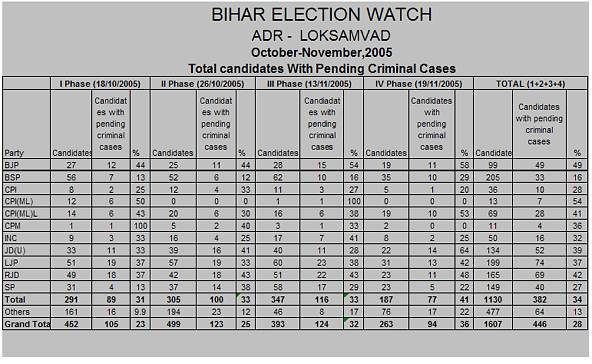 Predictably, the candidates with assets much above Rs 1 crore also have towering liabilities. Rabri Devi from Raghopur constituency for instance, has total assets of Rs 1,22,31,930, in addition to a Maruti 800, a military jeep and agricultural land. She has liabilities of about Rs 46 lakhs. To cite another example, Upendra Singh from Begusarai constituency has assets of Rs 81,094,519 and liabilities of Rs 1,81,33,676. (1 crore = 10 million.)

Take criminal charges against candidates by various categories. As many as 168 candidates are listed against Section 307 for attempt to murder. Five candidates have rape charges against them  one each from LJP, SP, BJP, RJD and JD(U). To consider an instance, Ras Bihari Mandal from BSP has been charged with "attempt to murder, kidnapping with intent to murder, assaulting public servant to prevent him from doing his duty and 'culpable homicide' not amounting to murder".

On the flip side, while the courts have unequivocally framed charges, none of the candidates has been convicted. Candidates can also tamper with the judicial system due to their political stature. As Mohapatra puts it, it is all about bahubali  money and muscle power, both of which often reinforce each other. Bihar tends to prove the hypothesis that bahubali is not just amply used to reach political positions, but the equations works just as fine the other way round  political positions can then be used as avenues for increasing both money and muscle power. One of the only ways out is to not let such candidates contest elections in the first place.