Beyond the Clemenceau's recall

The recall of the decommissioned French warship Clemenceau back to France in the wave of protests worldwide opens a great opportunity for India to clean its ship breaking yard in Alang, and improve conditions for its workers. A thorough assessment of facilities at Alang is much needed, notes Ramesh Menon.
22 March 2006 -

Since the Clemenceau's dramatic recall to France in February, the focus has shifted to the grim conditions for workers in Alang.

Shortly before he flew into India in late February, French President Jacques Chirac ordered the ship to take a U-turn, with the French Supreme Court suspending that country's decision to let the ship proceed to Alang. Environmentalists in both France and India opposed its being broken in India as it was laden with asbestos, risking environmental fallouts in Alang and on the health of unprotected workers. The dead 27,000 tonne, decommissioned French warship was sailing to India to be broken up at the ship-breaking yard at Alang in Gujarat. 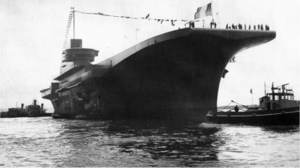 Chirac visited India to pull off a new relationship with the "Asian tiger" in many economic areas. He apparently did not want Clemenceau to ruin the strategy he was charting. Moreover, there was tremendous pressure on Chirac to neutralize the damage that worldwide negative publicity in the media was doing. Both television and print journalists were very vocal in attacking the move to send Clemenceau to India and ran stories on how ill equipped Alang was to deal with it. Indian papers too were full of it and was almost taking away the focus of Chirac's visit. Worse, was the fact that the opposition in France was also not losing an opportunity to haul Chirac over the coals. French citizens' groups raised their voices as well.

Etienne Le Guilcher, President of the Breton branch of ADDEVA, the Association to Help Asbestos Victims in France said that it was criminal to send the ship to India in its present state as it had lots of asbestos. The French Navy had told him that he could not prove that there was asbestos on the ship. At 62, he is fighting a battle in France against asbestos and sees his own condition as a reminder. Le Guilcher who was working on the warship, is today suffering from asbestosis and says it has destroyed his life. Breaking the Clemenceau in India in its present state of contamination would be tantamount to a crime against humanity, he said.

There were also contradictions galore. Initially, the French authorities were vocal, claiming that the ship contained very little asbestos. But sources involved in decontaminating the ship in France said that the figure was almost 500 tonnes. India's environment minister, A Raja, added to the confusion saying that international rules on hazardous waste did not prohibit a ship coming in for breaking.

India's Supreme Court, aware of Gujarat's ship breakers crying foul said that it would not allow this sprawling business to go to other countries nor would it allow it to become an ecological hazard.

Throughout the brouhaha over the ship's proposed entry to Indian shores, the international NGO Greenpeace had alleged that the French authorities were trying to push their toxic waste into India, in violation of the Basel Convention of which it was a signatory. It stated that the state government of Gujarat was seeing the toxic ship only as an opportunity to boost the sagging revenues of Alang that was facing stiff competition from Pakistan's and Bangladesh's yards that also have slack laws.

Greenpeace had also not minced words when, earlier, Dominique Girard, the French envoy to India, visited Alang before Chirac's visit and announced that he was very satisfied with what he saw at Alang. He had said that Alang was capable of safely breaking down the toxic ship. Greenpeace had asked if the facilities in Alang had improved overnight to deal with hazardous wastes, and also whether the Ambassador of France had the capacity to carry out a technical evaluation about ship breaking facilities.

Girard had also said that France was willing to take back the toxic waste once the ship was scrapped in India. Locals in Alang had shouted pro-Clemenceau slogans. But, environmentalists maintained that the demonstrations were staged managed by ship breakers. Still, poor migrant workers in Alang do fear that their jobs are in danger if environmental laws become strict and ships move to yards in Pakistan or Bangladesh.

All India Trade Union Congress Deputy Secretary, H Mahadevan, said caustically: "The ship breaking industry will not close because of the return of Clemenceau but it should not flourish at the cost of the lives and limbs of workers and the environment. The recall of the ship was a slap on the face of Indian authorities who slept while the streets burnt." Former Navy chief Admiral Ramdas said that there could be no justification for treating our shores as a graveyard for international toxic waste. "Why use our backyard and waterfront to pollute?" he asked.

The story now is no more of Clemenceau's recall to France. India's Supreme Court, aware of Gujarat's ship breakers crying foul that barring the Clemenceau's entry would affect the interests of the ship breaking industry, clearly has said that it would not allow this sprawling business to go to other countries nor would it allow it to become an ecological hazard. Additional Solicitor General Gopal Subramaniam said that the flourishing ship-breaking industry at Alang could not be allowed to die and the government's first priority was to conduct a scientific assessment of facilities at Alang.

Justices Arijit Pasayat and S H Kapadia had directed the central government in February to set up a task force comprising Naval officers and representatives of the Ministry of Environment and Forests to look into the basic infrastructure in Alang and suggest measures to be taken in the shipbreaking yard. The apex court is expected to hear the report of the task force sometime in mid April.

As the Clemenceau turned around, Greenpeace rightly pointed out that this was a golden opportunity for the ship-breaking industry to upgrade itself in order to make India a destination of choice. G Anantha Padmanabhan, Greenpeace India's Executive Director said his organisation was ready to offer its expertise and resources to make that happen.

The focus has shifted to the grim conditions in Alang, the lack of safety nets for the workers, the lack of insurance, the lack of medical care and the lack of value for their lives. In many ways, this is the silver lining. It may force the government to take up the broom to clean up Alang. It has also focused attention on the harmful properties of asbestos and how it is time for India to take a hard look at banning it like many other countries of the world. Asbestos is normally added to materials for heat insulation and fire resistance. When it is broken up, the dust released could enter the lungs resulting in respiratory complications and even cancer. Workers in Alang are among the worst protected ship breakers rarely even wearing gloves or other protective material.

The Clemenceau controversy is an opportunity for India to ensure that no toxic wastes can be dumped in the country and equally, to revive the ship breaking industry at Alang, which is caught in a downward spiral.

Yet, there are indications of 'business as usual' with the new task force created at the direction of the Supreme Court. "The task force was also supposed to consult stakeholders and though it started work in mid February, we have not been consulted as yet," complains Ramapati Kumar, a campaigner with Greenpeace-India.