The bus to Mumbai

The mercury is coming up on 46°, maybe 47°C as the passengers arrive. It's the bus to Mumbai and its 58 seats will be more than full. Perhaps at the starting point itself.

It's a temperature at which you hate everybody and arguments driven by colourful prose ring out in the bus depot (and on the buses). The travellers, like lakhs of others in this poorest of Andhra Pradesh's districts, are voting with their feet. Most of them are tiny farmers and landless workers. The biggest group consists of Lambada adivasis. There are many poor dalits too. All getting out of a situation they find intolerable. In some estimates, close to a third of the district's populace could be working outside it just now. 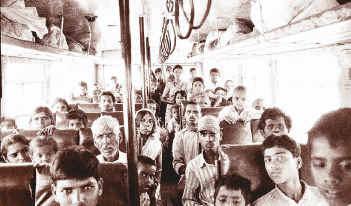 Since they're doing so in May, the cliché of drought presents itself at once. The problem with that notion is that an even larger number of people migrate from here in the period from November to January.

There are three unusual passengers on the Mumbai bus today. Ramulu, Secretary of the Andhra Pradesh Agricultural Workers Union in this district. Venugopal, a reporter with Prajashakti, a Telugu daily. And yours truly. This way, the travellers are our captives. For some hours, anyway. Now we can check if they are "fleeing the drought" that's believed to be the sole cause of distress here.

Why check? And why Mahbubnagar? Because it's less than a hundred kilometres from the State capital. Which is where the country's most celebrated chief minister sits. The crisis in the State's agriculture  and governance  is real. It has gripped this district for some time now. But with a national media reluctant to see that Andhra Pradesh is somewhat bigger than Hyderabad, Mr. Naidu's policies have not faced the scrutiny they deserve.

The extent of the distress-driven exodus is not agreed on, though. "There have been migrations from Mahbubnagar for a long time," says District Collector Madhusudhan Rao. And in that sense, he's right. However, he sees no reason to conclude that they have been much worse this season. In fact, "more work and grain is reaching the villages in this period".

Are migrations no greater, really?

The bus is already full as early as an hour before departure. A couple of stop sfurther on, the vehicle will be packed. Children are among the passengers

When I tried making it to Mumbai from here in 1993, I was told then there was one bus from the region weekly. Today, there are 32 to 34 buses a week going straight to Mumbai from here. If the two more routes the Andhra Pradesh State Road Transport Corporation is planning come through, that number could cross 45 buses weekly.

Then there are the private bus services to Mumbai. And tens of thousands also take the trains each season. More have done so this year. All three trains going to Mumbai via Thandur are running full every day. "About 65 per cent of this village has gone out looking for work on those buses," Chennaiah had laughed. That was in Kanimetta village of the Kothakota mandal the day before. He himself was a low-level labour recruiter. "That route to Mumbai is our lifeline." "Mumbai" really means several stops in Maharashtra, including Pune and Thane.

People are leaving Mahbubnagar in very large numbers. Many do so each year, anyway, as the Collector points out. But the flow has been getting worse in recent years. And it's certainly heavier in this one.

A large part of the RTC's revenue here comes from the Mumbai route. And it's clear that there are often over 100 passengers on those 58-seat buses. Which means some people are standing for much of that 18-hour journey. And then there are the huge numbers from this district heading for Hyderabad. Also, to at least 30 other destinations ranging from Gujarat to Rajasthan, even Orissa.

What accounts for this desperate out-migration? "Without Mumbai and Pune, we cannot survive," says Pandu Nayak, a Lambada adivasi. In Perkiveed tanda (colony) of the Koilkonda mandal where he's from, "Our households are deep in debt. Our children, starving". Venkataiah, from the same tanda adds: "Any chance of agriculture here is finished. The costs are simply too high. If you are a labourer, it's worse. In a month, you cannot find more than three or four days of work. All this makes life too hard. And now there is no water either. The government does nothing." ("Venkataiah" is not at all a typical Lambada name. But many in that community adopt such "mainstream" names when they venture out. Letting people know you're an adivasi is asking to be exploited.)

What he's telling us pretty much matches with what we've already seen. In the villages of Gurrakonda, Kondapur or Vepur, for instance. People here are in deep distress. What little work there is, is in the hands of contractors who have cornered government projects. They prefer labourers from outside as such a group would be more submissive. Hence, not many from the district can find work here. Mahbubnagar's workers have been the backbone of some of the toughest construction projects in dozens of cities in other States. There, their labour is sought after. Here, they are kept idle. However, the same contractors of Telangana will use thousands of these men and women in Rajasthan or Orissa. Cut off and alone in those States, they are more dependent and pliant.

Countless households lie locked up. Thousands of others have just the oldest member of the family left behind. The mass migrations destroy any chance of education for the children who accompany their parents for months at a time. (This is A.P.'s worst district in terms of literacy.) While agriculture has done badly countrywide, it has sunk in this State. And that for some time now. Growth in agriculture last year was minus 17.06 per cent.

And it wasn't just the drought. Mahbubnagar has done badly in good monsoon years, too. Other States have faced worse droughts without agriculture caving in to the extent it has in Andhra Pradesh. Often, too, migrants are leaving from relatively water surplus regions of the State. The country has seen many policies hostile to small farmers and landless workers this past decade. But here, they've been extra harsh. This State leads in farmers' suicides.

There's a steely ruthlessness towards the rural poor. The year 2001 saw rice exported to overseas markets at Rs. 5.45 a kilogram. It was a time of widespread hunger and distress. Yet, the State sold rice to its own poor at Rs. 6.40 a kg. Some of the "exports" were rejected as "unfit for humans". It was after this that food-for-work programmes began here in that season. Huge power tariff hikes, soaring input costs, fake pesticides, all these brought small farmers to their knees. Massive corruption in the food-for-work-programme hasn't helped either. It's all added up to an awful crisis.

Labourers from Mahbubnagar travel to nearly 30 destinations across the country to find work. Meanwhile, contractors bring in workers from other States to work in Mahbubnagar.

Debt-driven small farmers and landless workers have left this district in larger numbers this season. About two lakh people migrating seasonally has never been seen as an issue. The estimates of those on the move now vary vastly. From six lakhs to eight to 10 lakhs, according to claims in the Telugu press. Where they are going, there is at least better money. "Yes, we earn more in Mumbai than here," says Venkataiah. "But the moment we are back we have to pay our creditors much of what we save." He could earn up to Rs. 250 in a single day in Mumbai as a carpenter. And he finds work on "maybe 15 days in a month. Twenty if I'm lucky". However "don't forget our loans here", he says. That lands them in an unending trap. Every single person going to Mumbai is also in debt. "Whatever we earn in Mumbai, most of that goes in repaying our loans."

We are on the road to Mumbai. Even as we sit in different parts of the bus, speaking to migrants, drivers Fashiuddin and Sattar prove a mine of information. They've done this route many times and know their passengers. Fashiuddin gives us a virtual disaster tour. He points to streams that have died, tanks that have dried. The lack of repairs to tanks and canals. The devastated fields, the impossibility of keeping your farm running. "These are really hard working people, sir. But who cares for them? They cannot find work here. There is nothing done to give them employment. They are poor and in debt. On top of all of that comes the drought." He's clear that there is a significant man-made element to the crisis. "If only there was an attempt to give them some work," he says. "That's why they go to Mumbai," he adds. "Most of them will go and work in building construction, brick making and roads."

Labourers from Mahbubnagar travel to nearly 30 destinations across the country to find work. Meanwhile, contractors bring in workers from other States to work in Mahbubnagar.

Patterns change according to where more construction is taking place. "Eighty per cent of this bus will empty at Pune," predicts Sattar. He's speaking as he helps a young woman with a two-month old baby board the bus at a stop. There's a delay, with several tearful family farewells enacted at the same time. Sattar mixes sympathy with an ability to plug the farewell routines swiftly.

Our surprise find on board is M. Ganesh, a 20-year-old student. A Telugu whose family is in Mahbubnagar, he studies in Mumbai and stays there with his brother.

Ganesh is proud to be a card-carrying Shiv Sainik.

He is a bit bewildered when we ask him about Sena chief Thackeray's latest call for ridding Mumbai of "outsiders", especially poor ones landing up in the metro seeking work. "I've heard nothing about this," he says. "I've been away. But I will enquire about it when I get there."

In their destination towns, the migrants will live in appalling conditions. On the street, in soul-breaking slums or, at best, in filthy chawls. "Still, it's better than going hungry here," says Nagesh Goud on the bus. "At least we earn something." Increasingly, a large part of that something gets chewed up in medical costs. One of the biggest problems faced by the district's poor workers is rising health expenses.

Every migrant you speak to confirms he or she has had more than one episode of jaram (fever). "A visit to a doctor in Mumbai could cost between Rs. 40 to Rs. 100," says Nagesh. "That's not counting the medicines." The children fall ill very often. Most people cannot cope with the medical costs. And many have taken ailments from the cities back home to their villages. The general immunity of a population that's undernourished and overworked seems to be in decline. Yet, many more venture out to evade hunger and misery.

With a population of some 34 lakhs and perhaps close to a third of that ending up outside, Mahbubnagar is in big trouble. Some other districts, too, face similar hardships. Software is not the only thing A.P. exports. Nor hi-tech brains to the United States. Misery-driven migrations, hunger, and distress are among its other major products.

Part II : The wrong route out?

P Sainath is one of the two recipients of the A.H. Boerma Award, 2001, granted for his contribution in changing the nature of the development debate on food, hunger and rural development in the Indian media.