A child's trauma, the media's madness

The media's coverage of a young girl's humiliation in her school is totally devoid of objectivity or even plain common sense, making things even worse. Shoma Chatterji reports.
13 July 2012 -

Last week, at Patha Bhavan, the school that Rabindranath Tagore set up with his Nobel prize money in Shantiniketan, a ten-year-old girl was forced to lick her own urine mixed with salt as punishment for the 'crime' of bed-wetting. The warden forced her to drink her urine in the presence of dozen-and-odd roommates. When the girl's parents came to the hostel and raised a hue and cry, they were put behind bars for creating a 'law-and-order' problem. For six hours, they remained in police custody along with several other inmates. The warden was taken into custody too but all three were released on bail after some time. The warden has since gone underground.

Across the numerous news channels in the country, readers and viewers was bombarded with opinions, panel discussions, arguments, reports, questions from news anchors, social activists, NGO heads and so on, who attacked the revered institution's attempts to hush up the case. The little girl, already traumatised, is being telecast again and again and though her face is blurred by the camera, the channels made little attempt to keep her name a secret. The girl is reportedly in deep shock, and refusing to eat or drink because each time she is offered food, she says she is reminded of licking urine and feels like throwing up.

Admist the frenzy of reporting, there is little sensitivity to what the young girl needs most now - not prying microphones, but a supportive family and social environment in which her suffering is eased. Rather than face television cameras that do nothing more than force her to relive the incident in her mind, what she needs is a medical expert, a child psychologist or a school counselor. Even on the endless talking shows and 'news' reports, the producers and anchors should get such experts on the shows to restore some sanity. 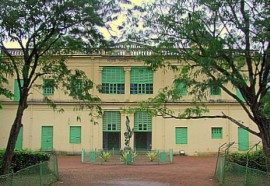 Intellectuals who participated in the debate and discussion often focussed on the tarnishing of the august image of a revered institution founded by Rabindranath Tagore. Would it have been alright if the institution was a less famous one and not associated with Tagore's name?

The girl's parents too need help - not to answer inane questions, but to address a genuine medical problem faced by their child. They don't appear to realise that by showing up on television again and again, they are increasing the sense of embarrassment and self-imposed guilt in their already troubled child? If they are less aware, isn't there someone who can advise them to take the limelight away from the child and tackle it in her absence?

Meanwhile, there is no shortage of people jumping up and down to get their few minutes of airtime and press, while the story is 'hot'. Dr. Shanta Sinha, who heads the National Commission for the Protection of Child Rights, held forth at length about violated rights, but did not mention the importance of a medical probe into the girl's problem even in passing. Swami Agnivesh went a step further, recalling his own experience of bed-wetting long after he had outgrown the age, and declaring that he remedied the problem by drinking his own urine! He forgot that his act was an act of choice while the little girl had no choice in the matter and did not even understand why she was being punished!

Intellectuals who participated in the debate and discussion often focussed on the tarnishing of the august image of a revered institution founded by Rabindranath Tagore. Would it have been alright if the institution was a less famous one and not associated with Tagore's name? Why is the cause of the problem - bed wetting by a ten-year-old - not addressed at all? Why hasn't there been a proper medical discussion on the causes, consequences and remedies of bed-wetting in slightly older children who have grown out of the normal bed-wetting age?

Bed-wetting in older children could be caused by any of these - (a) urinary tract infections, (b) juvenile diabetes, (c) structural or anatomical abnormality, (d) neurological problems (e) sleep apnea and (e) emotional problems. Abnormalities in the nervous system, or injury or disease of the nervous system, can upset the delicate neurological balance that controls urination. Emotional problems result from a stressful home life, such as constant conflict between parents or an ongoing divorce or a remarriage by one parent that could cause children to wet the bed.

Major changes, such as starting school, a new baby, or moving to a new home, are other stresses that can also cause bedwetting. Children who are being physically or sexually abused sometimes begin to wet their beds.

In physical terms, three conditions generally contribute to bedwetting: excessive urine production at night, an overactive bladder and an inability to wake up in response to the need to urinate. Although the condition itself is not associated with a major illness, it is important for physicians to conduct a physical exam to rule out any other causes. Urinalysis and urine culture may be the only necessary tests as evidence shows that other investigations are not particularly useful or cost effective.

Most parents and other family members have the tendency to look at bedwetting as a sign of poor toilet training skills. This is not true, say doctors. The habit of bedwetting is a part of the developmental stage in many children. it may not always possible to set a target, for a child to develop bladder control completely. Studies indicate that bedwetting is prevalent in around 15 per cent of the children who are between the ages of 5 and 6. This problem also affects approximately 5 per cent of children between the ages of 8 and 11.

Most children do outgrow this habit on their own, without any help. However, in some cases, parental or perhaps even professional intervention may be required. Involuntary urination or nighttime incontinence in many children may not actually be a problem on its own; it could indeed be the symptom of a deeper underlying condition, which requires immediate medical attention.

None of these have been part of the 'investigative' stories being aired on our esteemed news channels as if a conspiracy of silence has clouded the question of a medical analysis and investigation of the case. One regional news channel reported that another girl in the same residential school of Patha Bhavan was subjected to similar treatment but she kept quiet about it. But there is no follow-up on that case, thankfully - or else it would mean drawing that other girl out of her private space and make her the guinea pig for yet another sensational news story and make her relive the nightmare all over again!

TIGER SANCTUARY : Are tigers back at the Buxa reserve?
MORE ARTICLES
on similar topics ...
CHILD HEALTH