Numerous laws and rules at the Central as well as State levels are in place to assess the extent of child labour in the country, and to tackle it. Court directives too lend a hand. But CAG reports show that those responsible for carrying out this reform are indifferent to the vast tragedy. Himanshu Upadhyaya reports.
20 November 2005 -

There are several constitutional and other statutory provisions aimed at tackling child labour. The Child Labour (Protection and Rehabilitation) Act, 1986 was introduced by the Government of India to ban employment of children below the age of 14 years in factories, mines and hazardous employments and to regulate the working conditions of children in other employment where there is no prohibition of employment of children. The Act came into force on December 23, 1986. The Child Labour (Prohibition and Regulation) Rules were framed in 1989 by the Central Government. Through a Notification in 1993, the working conditions of children have been regulated in all employment which is not prohibited under the Act.

To translate the National Child Labour Policy announced on 14 August 1987 into action, the GoI launched the National Child Labour Projects (NCLPs) in 1988, with the components such as awareness generation, survey for identification of child labour, non-formal education in special schools, rehabilitation of child labour withdrawn from hazardous employment, mainstreaming of the child labour studying in special schools, enforcement of labour laws and income and employment generation. Subsequently, the Supreme Court, noting that the child labour policy was not being properly implemented, issued (10th December 1996 and May 1997) directions for: 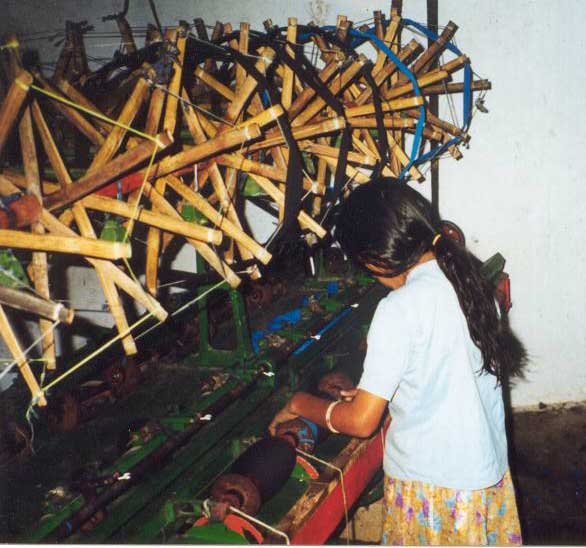 Recently, Comptroller and Auditor General (CAG) audit reports from several states were issued, scrutinising the implementation of the Child Labour (Prohibition and Regulation) Act; this was done through test checks of the records for the period 1999-2004. The most important factor in framing a state-level action plan to enforce regulatory, prohibitory and rehabilitation measures of the Act is a correct survey and identification of the number of children employed in factories, mines and hazardous employments. The magnitude of child labour as assessed in different surveys is as follows:

The West Bengal government did not conduct a proper survey during 1999-2004; commenting on this the CAG wrote, "Although, Rs.23 lakhs were allotted for the purpose, no survey was conducted during 1999-2004. Out of this allotment, Rs.5.60 lakhs only were spent for office expenses. As a result, the number of child labourers as of March 2004 remained unassessed. No child labour was reported during 1999-2004 under Section 67 of Factories Act, 1948 and Section 21 of Motor Transport Workers Act, 1961".

While Rs.74,000 was spent to purchase 'Almirahs and Typewriters', Punjab returned the balance amount allocated for surveys of child labour - alongwith interest - to the Centre, as the funds could not be transferred to the Labour Department in time for conducting surveys!

Though only 16,046 children were reportedly engaged in hazardous and non-hazardous occupations in the 1997 survey, test check of records of three districts (North 24 Parganas, Bardhaman and Dakshin Dinajpur) relating to the survey conducted during 1995-2004 by the DMs and NGOs for enrolment of students to special schools disclosed existence of 308,000 child labourers in hazardous and non-hazardous occupations as mentioned below:

Commenting on this sorry state of affairs, CAG pronounced its opinion marking both the available surveys as unreliable. It is sad that even in its reply dated January 2005, the government has failed to offer any cogent reason behind such discrepancies.

In its report on the Maharashtra government, the CAG noticed that there was no reconciliation of survey data taken by the Labour Dept with that available from NGOs. It was noticed that in the 12 districts where CAG test checked the records, during 1996-2002 according to the Labour Department the number of child labourers engaged in hazardous occupation was only 264, while a survey conducted by NGOs detected 45,081 child labourers during the same period in the same districts - a 200-fold difference! Replying to the audit remarks, the Maharashtra government stated in October 2004, "the inspection machinery concentrated on establishments covered under the Act under the categories of hazardous occupations and processes whereas NGOs on the contrary, conducted a house-to-house survey and also included [those in the] self employed category based on secondary data of school drop outs". Pronouncing its opinion on the matter, the CAG stated that such discrepancies in basic data raised doubts on the reliability of the information available with the Maharashtra government, with consequent effects on planning and implementation.

Audit scrutiny of records of 14 District Rural Development Agencies (DRDAs) in Punjab focused on the allocations and expenditure for the purpose of conducting surveys following the Supreme Court's directions to detect child labourers working in hazardous and non-hazardous occupations. In March 1997, the Ministry of Labour, Government of India released funds amounting to Rs.25 lakhs to 14 DRDAs. For a test check of records, information from only five districts was made available, where only Rs.1.14 lakhs was spent although Rs.9.25 lakhs was available for the surveys. While, it was noticed that Rs.74,000 was spent for purchase of 'Almirahs and Typewriters', the balance amount - along with interest - was refunded to the Government of India, as the funds allotted to DRDAs could not be transferred to the Labour Department in time for conducting surveys!

Pronouncing its opinion on the matter the CAG stated that most of the funds either remained unutilized or were spent on irregular purchases and were not fruitfully utilized for the purpose. Moreover, the CAG expressed its displeasure stating that the results of survey were not utilized for opening new special schools to cater to working children - one of the main purposes of such surveys.

The data on various surveys carried out in Karnataka to identify the child labourers showed wide variations in the numbers of child labourers assessed by Education and Labour Departments. Whereas the State Child Labour Cell, in its Status Report for March 2004, found 38,443 child workers engaged in hazardous (8553) and non-hazardous (29,980) occupations, in 10 test-checked districts alone the CAG found that 48,342 child labourers had been identified by NGOs (19,776), departmental inspections (1999-2004), and survey (28,566) - as per data furnished by NCLPs/ SCLPs. Evidently, as elsewhere in the case of Karnataka too the CAG came to pronounce the opinion that the data emanating from various surveys was quite unreliable.

Why is there such a difference between government figures for child labour and the data that NGOs collect? India Together's Ashwin Mahesh talked to Kavita Ratna, from the Concerned for Working Children based in Bangalore, and posed the question. Her response:

There are several reasons for the differences. Broadly, we can put these down to three categories.

Apathy: A lot of people do not care about child labour too much. They also want the country to look like a very clean place with no problems like this, and so dont want discussions about child labour in the public spaces. We want to also protect markets for things children make - carpets, footwear, silk, etc. All this creates pressure - from abroad as well as internally - on labour inspectors and other government officials to not come up with the correct figures. At least one honest government official I know has been admonished for reporting the right figures for his state, because the really worse-off places like Bihar were reporting fewer children at work than his state. He was getting flak for doing his job well! Only when the broader system also cares about children at work, things will be easier for the officials.

Confusion in the definition of child labour: A lot of children work in agriculture, on within their own families. Their work is not considered child labour officially. Also, children who are in school but also work are not counted, only those children who are fully out of schools and in jobs are looked at.

Inadequate follow-up systems: What happens when a child labourer is identified? The child is at work because the family needs money, so even if he is put in a school, he will simply run away from the school too, and go back to work. The government, meanwhile, is supposed to keep on producing reports of this child, which is good in theory but not very helpful if the child has run away. So, nearly everyone is opposed to counting - the children don't want to be counted, their parents deny the children are working, the government departments responsible for monitoring have no incentive to count the children properly, and the employers of the children are also against it.

Add to all this the normal levels of corruption that exist everywhere, and things simply get worse. Some inspectors want to simply make money not to conduct their raids properly, and there is money to be earned illegally if they don't do their job, so some of that happens.

But this does not mean that there is no way out. The system can work well, provided that the follow-up action which happens after a child labourer has been identified works with the realities on the ground. The children's own communities must have access to decentralised data on child labour in their midst, and there must be regular action - weekly, fortnightly - to assess how such identified children can be steered towards a normal childhood. We have experienced this firsthand, in the places where we take up identification and rehabilitation. It is certainly doable, but requires persistence.

The follow-up system is also important because without it, children are simply labeled. It's a bit like having HIV, and being told to go and get yourself checked. If there's no support system, you're just left with the label, and a society whose response provides no security. Who wants to be identified as a child labourer?

Child labour in India is widespread, this is no secret; the legislation enacted at the Central and State levels is intended to identify the extent of this tragedy and to initiate steps to reverse it. However, as seen from the CAGs reports, states either routinely under-report the true numbers of working children, or simply do not bother to conduct the surveys needed to properly identify the children. The CAG's reports show that this maladministration is now routine, and millions of children around the country continue to languish in labour during their 'childhood'. Our children can't read and write because the adults responsible for liberating them can't - or won't - count them correctly.

TIGER SANCTUARY : Are tigers back at the Buxa reserve?
MORE ARTICLES
on similar topics ...
CHILD LABOUR