In front of the lens

A cinematographer remembers his own journey of documentary film-making, offering insights into the technical and emotional challenges of his work. Shoma Chatterji reviews In Camera - Diaries of a Documentary Cameraman.
22 March 2011 -

Perhaps for the first time in the history of cinema, a cinematographer decided to document his working life on celluloid through a 79-minute documentary film. The film is In Camera - Diaries of a Documentary Cameraman and the director is Ranjan Palit, one of the most successful cameramen in the country.

Besides having shot more than 100 documentaries over 25 years, Palit has also directed and co-directed several documentary films. He has worked for the BBC and UNICEF. His film Voices from Baliapal won the National Award in 1989, the Golden Conch (1990) and the City of Freiburg Award (1991). The Magic Mystic Marketplace won the Golden Conch (1996) and the UNESCO Prize (1997). Other awards include National Awards for Best Documentary Cinematography for In the Forest Hangs a Bridge and Conversations, and the IDPA Award for Best Documentary Cinematography for Hope Dies Last in War.

For his celluloid diary In Camera, Palit turned the lens of the camera inwards, to take a nostalgic and introspective journey back into his 25 years as cameraman and filmmaker "to take stock of my bearings," he explains. Made in 2006 with a film fellowship he was awarded by the Public Service Broadcasting Trust, the film is motivated by the ethical questions of shooting investigative and activist documentaries. While the work focuses on human tragedy, violations of human rights, and the lives of marginalised and oppressed people, he has always walked away with camera and film intact, leaving the subjects behind to carry on with their battles of personal survival.

The film opens with a black-and-white frame, where one gets a fleeting glimpse of the cameraman, more black than white investing the frame with an aura of intrigue about what one is about to see. When asked what made a young man in his early 20s choose to make his diploma film on Bhiwandi, Palit recalls he accompanied a journalist friend who was doing a feature story for Onlooker, to take photographs. He was shocked by the terrible working and living conditions of the power loom workers of the city, and decided to come back and make his diploma film on the subject.

Bhiwandi has the largest number of power loom factories in the country, where workers routinely face exploitation, underpayment, overwork and harassment by their employers. This is compounded by air of pervasive communal tension - the loom owners are mainly Hindu, while a big section of the workers are Konkani Muslims. The film was made much before the communal riots in Bhiwandi, which took place in 1984. It set Palit's interest as a cinematographer towards the documentary form, rather than feature films.

The clips in In Camera are voice-overed by his narration where, instead of dwelling on the aesthetics or form of cinematography or on the challenges he faced in the process of shooting or filmmaking, Palit explains the ethics of cinematographing these films. Nonetheless, for the viewer, the clips offer an enchanting dossier of versatility in terms of the subjects he has shot, the insights into the issues the films deal with, and many insights from this glimpse into the mind of a creative documentary cinematographer. The 'journey' therefore, is seen more through his significant works than through the awards the films won.

For Maya, directed by his wife Vasudha Palit, is a very personal film made to commemorate 50 years of Indian Independence; the film delves into the lives of four generations of women in the director's family, and explores the spaces they created for themselves. Kamala, a celluloid biography of Kamlabai Gokhale, and then the oldest living actress of Indian cinema, directed by Reena Mohan, offers glimpses into Palit's gift for portraiture. In one scene, the entire family of Kamlabai is supposedly posing for a group photograph when Kamlabai begins to speak and the frame comes alive.

A highpoint of In Camera are the clippings from Forever Young about the then-62-year-old rock musician Lou Majaw. showing girls going crazy as Majaw, a cult figure in music in the Northeast performs Bob Dylan numbers in his crazy way. The film was shot mainly in Shillong over six years, stalled for want of funds at various stages. 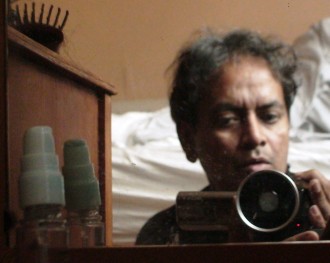 The film keeps completely away from talking heads - interviews of directors whose films he has shot over time, or stills and facts about the string of awards he has won. (Above: Ranjan Palit).

•  Silence of the truth

The narration in Palit's voice-over is not entirely free of emotional tone and pitch, but is rich in content, moving back and forth in time and space, and traversing different subjects freely and smoothly. He has been selective, however, in the films he has included in his look-back. "Not more than 30 to 40 films of the 100 documentaries I have shot are worth mentioning," he says.

The film keeps completely away from talking heads - interviews of directors whose films he has shot over time, or stills and facts about the string of awards he has won. This makes the film richer than it would have been had he decided to record facts one is already familiar with. There is a moving shot from Anand Patwardhan's Bombay My City, showing an infant who died during the slum demolition operations in Mumbai that the film documents. He caught pneumonia from getting soaked in heavy rains for four days. Palit refused to shoot the dead infant with its wailing mother, but Patwardhan told him that the father of the infant wanted them to film his dead baby.

"The father called up and said that he expressly wanted us to shoot the scene because this would be the sole record remaining somewhere of his dear child," explains Palit. The camera cuts to the clip closing in on the dead child lying on the mat of a hut, with the wails of his grieving mother piercing the soundtrack. The camera follows the father as he carries the dead baby to the cemetery. "It was an affirmation of the documentary, and not a voyeuristic peep," he says of the screening.

Still, the uneasy sense of being immersed in the realities he documents is evident from the fact that Palit decided not to make activist films any more after Follow the Rainbow, a 53-minute film that explores the struggles and tribulations of the Ho tribe who live in Chaibasa in West Singbhum district now in Jharkhand.

In Camera shows him visiting the place again 17 years after he had made the film and met the people. It is a disturbing and yet warm experience. Jonga, the main voice of the earlier film and now a middle-aged woman, laughingly asks him why he named his daughter Maya when he had promised her that he would call her Jonga. We also see him meeting the blind Baul singer Andho Kanai, the protagonist of Abak Jaye Here, now an old man who recognises Palit from the sound of his voice. It is a joyful reunion and the two share memories of days bygone, offering moments of relief within the rather heavy ambience of the film. 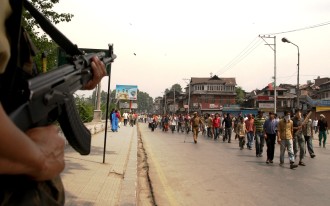 Palit's unease at being immersed in the realities he documents is evident - he is conscious that he has always walked away with camera and film intact, leaving the subjects behind to carry on with their battles of personal survival.

Palit says that he has visited the strife-torn, gun-ridden, bomb-punctured Kashmir nine times - for two powerful films, Amar Kanwar's Night of Prophecy and Sanjay Kak's Jashn-e-Kashmir. He visited the places for the tenth time just to shoot the same landscapes for In Camera, but could not because the place was extremely disturbed. "For the first time in my life, I was scared and was cooped up in my hotel room with my sound person. We had to come back without having shot a single clip. It was devastating for me both as a filmmaker and as a human being, unable to bear the shock of the unending situation sustaining there for more than 60 years as Kak's film keeps repeating.

The narrative is dotted with telling comments like "the documentary is sometimes stranger than fiction", "beauty is sometimes a hell of a burden" when visuals of a snow-covered Kashmir overlap the voice-over; "truth is sometimes unfocussed and blurred"; "when you are shooting the lives of displaced people, when do you shut off the camera?" While clips of Jashn-e-Azadi are framed, "is the cameraman a narrator, a storyteller, an observer, or a voyeur?" he asks, not expecting to answer his own questions. The last question - "should I continue to shoot, or should I look away?" perhaps places him on the edge of decision.

"I do not even want to know what the answers to my questions are," he later explains. "I have seen that one tends to get too involved with their lives. It is not only emotionally draining but also deeply disturbing. This is not just about Follow the Rainbow. It is also an outcome of the two films on Kashmir I shot. In the first one, a father is looking for the tomb of his grown son. In the latter film, a father believes that his son killed on suspicion of being a militant, though innocent. It is impossible to retain objectivity because the degree of involvement is tremendous," he sums up.

It takes a lot of courage to face the camera, for one who has always found himself behind it, seemingly secure in its objective lens. But having stepped around in front, Palit is not found wanting.