Harsh Mander's new book Looking Away: Inequality, Prejudice and Indifference in New India talks about the growing inequality and the lack of compassion amongst the rich for the poor in India. Darryl D'Monte reviews the book which despite its candidness about the grim realities offers a message of hope and promise.

Without putting too fine a point on it, the images of Indrani Mukerjea, who has allegedly murdered her own daughter, reveal a somewhat different plot than what has so far appeared in most of the media.

She is usually portrayed in a sleeveless top with a plunging neckline, holding a glass of wine or a cocktail. The backdrop is usually one of a bar, with its neon-lit garishness betraying more than a hint of hedonism.

The Times of India has likened her to a female Gatsby – someone who came out of nowhere, had nothing much to show for herself apart from her sultry looks, and yet catapulted herself to the highest echelons of  society through relentless self-promotion.

The few images of her slain daughter, Sheena Bora, indicate someone who shares a likeness with her estranged mother. Indrani’s husband Peter has been at the top rungs of the media and has endowed her with the highest profile that any parvenu could hope for.

Indeed, he was the CEO of Star TV, which is owned by the world’s most ruthless media mogul, Rupert Murdoch. Star introduced India to a new world of glitzy entertainment just as the country liberalised its economy in the early 1990s. No wonder that critics have called the entry of Star the “Murdochisation of the Indian media”.

I wondered about l’affaire Mukerjea after putting down Harsh Mander’s new book, Looking Away: Inequality, Prejudice and Indifference in New India. The media may carry image after image of the bold and beautiful in daily newspaper supplements and late-night shows on TV news channels, but these party-goers and givers and others of their ilk have turned their backs on the rest of India or “seceded” as Arundhati Roy puts it. 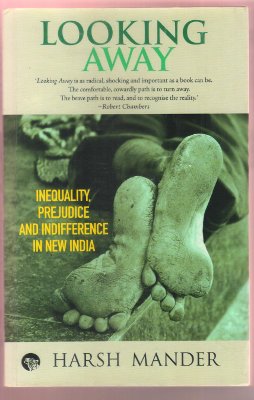 Mander documents in an almost cold-blooded manner not only the terrible disparity this country has promoted but how, like Marie Antoinette, we have insulated ourselves from “Bharat” and averted our gaze.

A few years ago, as I have noted earlier elsewhere, the annual UN Human Development Report introduced a “multi-dimensional poverty index” in collaboration with an Oxford-based institute, which showed that India had more poor people in absolute numbers in eight states than the 26 poorest sub-Saharan countries put together. Madhya Pradesh had the worst indices.

Mander notes how Amartya Sen and Jean Dreze refer to “revenues foregone” through policies and measures to benefit the private sector, which since 1991 has been bloated through LPG–liberalisation, privatisation and globalisation. In 2011-12, even during the so-called pro-poor policies of the previous Congress government and its president Sonia Gandhi, Rs 5300 billion of corporate taxes, customs  and excise duties were written off, a staggering 5.7 percent of GDP.

Of this waiver, just exemptions on diamond and gold imports – a dire necessity for our Marie Antoinettes -- were estimated to leave the country poorer by Rs 570 billion. This was twice the estimated additional cost of the much-maligned National Food Security law.

As Mander observes, all hell broke loose over the food security bill, with conservative commentators like Surjit Bhalla and Gurcharan Das calling it daylight robbery. Das believed that cheap food would disincentivise work. The Economic Times characterised it as “money-guzzling”, citing an estimated annual burden of Rs 1,250 billion, figures which, the author says, have to be taken with a fistful of salt.

The author recalls that there was hardly any response from the same brigade when Narendra Modi, then Gujarat Chief Minister, made over 1,100 acres of fertile land to Ratan Tata to relocate his Tata Motors plant, which ran into rough weather in Singur, West Bengal. Tata got this at Rs 900 per sq metre, with dedicated power supply and water thrown in. This was in addition to a loan at 0.1 percent interest, repayable after 20 years. No wonder Tata publicly hugged the CM at the plant launch, much to the dismay of human rights activists opposed to Modi for presiding over the 2002 riots.

Modi also bestowed this largesse on the Ford car company and then on his perennial favourite, Gautam Adani, who invariably travels with him on his frequent trips abroad, almost as his Industries Minister. Adani was given land in the state at what Mander terms “shocking, rock-bottom” rates of between Re 1 to Rs 32 per sq metre.

We must echo what critics of the neo-liberal policy regimes which are sweeping across the world demonise the ‘Bretton Woods Sisters’ – the World Bank and International Fund. In a truly astounding case illustrating the yawning deficit in democratic governance of these two key institutions, the former is almost always headed by an American and the latter by a European (including the philandering Dominique Strauss-Kahn). Some countries are more equal than others.

Records Mander: “It is extraordinary that very recently, these very institutions have begun to acknowledge that they may have been wrong, and drastically so. ‘In far too many countries the benefits of growth are being enjoyed by far too few people. This is not a recipe for stability and sustainability.’ These are not the words of a Left-wing ideologue, but of Christine Lagarde, managing director of the IMF.

Mander continues, “She goes on, ‘Let me be frank: In the past economists have underestimated the importance of inequality. They have focused on economic growth, on the size of the pie rather than its distribution. Today we are more keenly aware of the damage done by inequality…It leads to an economy of exclusion, and a wasteland of discarded potential.

“She compares rising inequality in the US and India. ‘In the US, inequality is back to where it was before the Great Depression, and the richest 1% captured 95% of all income gains since 2009, while the bottom 90% got poorer. In India, the net worth of the billionaire community increased twelvefold in 15 years, enough to eliminate poverty in this country twice over.”

Mander quotes no less a person than former Finance Minister P. Chidambaram who stated how the tax-GDP ratio was 5.5 percent for direct taxes and 4.4 percent for indirect taxes, “one of the lowest for any large developing country and will not garner adequate resources for inclusive and sustainable development”. As the veteran rural affairs journalist P. Sainath alleged, Chidambaram did nothing to raise taxes but balanced his books by curbing expenditures in the social sector.

The virtue of Mander’s book is that it isn’t a diatribe against anti-people policies but an understated critique which is far more effective than a rant. What is more, he illustrates all these dismal policies with accounts of people in dire straits, which he gleaned from his peripatetic travels to the distant-most corners of his city, Delhi and the country at large.

These anecdotes yield reams of human experience which remain in one’s memory, much more than pure economic or sociological analysis would. For instance, at a Big Fight programme on NDTV with moderator Vikram Chandra which dealt with slum dwellers and their demonisation as unwanted migrants, he asked who in the audience had grandparents who were born in the capital. Only Chandra raised his hand; in other words, we are mostly immigrants ourselves.

At an Urban Age conference – organised by the London School of Economics and the Deutsche Bank – in Delhi in November 2014, this columnist presided over a session in which Mander took part. He recounted the answer a pavement dweller in the capital gave him when asked why he slept on the traffic divider in the centre of a busy road at night. Because the traffic fumes kept the mosquitoes at bay, he could catch a few winks.

The author also advocated that schools, which are only occupied for eight hours a day, could be turned into dormitories for homeless children at night. His book details his various encounters at relief camps for riot victims and other vulnerable people throughout the country. He even spent a night at a camp in Ahmedabad after the riots and is honest enough to mention that the single sojourn made him physically sick for several days.

Mander has written a remarkably candid and penetrating book which deserves to be widely read. It isn’t, as might be imagined, a dirge, rather a message of hope and promise. It could well be prescribed as compulsory reading not only for sociologists and anthropologists but, even more urgently, by economists and business school students, those who otherwise espouse the market without questioning it. The hope then is that we will then not simply turn away, but confront what we see.