In the passing of Kalpana Chawla, the genuine feeling of loss expressed by so many reveals the thirst amongst the young for role models, says Kalpana Sharma.
01 February 2003 -

MY namesake was killed above the skies of Texas last week. For thousands of young girls across India, Kalpana Chawla's was a life extinguished too soon. In those 41 years that she lived, she succeeded in igniting extraordinary hope and expectation in many young women, most of whom she had never met.

In all the column inches of tributes and descriptions about this young woman that have appeared in newspapers in India and in the United States, Kalpana's determination to achieve her dreams stands out as her principal quality. From school teachers to college professors to colleagues, everyone speaks of her conviction that she could achieve whatever she set out to do. And in response to this, young girls in Haryana, Delhi and Mumbai have echoed the same sentiment — that they too want to achieve the impossible dream, and that too will not give up. 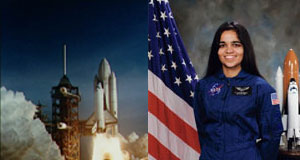 While such determination is remarkable in anyone, man or woman, it is clearly more significant in a girl born in a State where the birth of a girl is cause for mourning, not celebration. It is lucky that Kalpana was born in the 1960s. At that time, the technology to detect and abort a female foetus had not become common currency in her home state. As a result, she at least had a chance in life because she was allowed to be born. Today, girls in Haryana are disappearing at a rapid rate. One of the more shocking statistics that emerged from the 2001 census was that in the more prosperous States like Haryana and Punjab, the 0-6 years sex ratio was disproportionately in favour of boys. In Haryana, there are only 820 girls to every 1,000 boys in that age group, a figure that is much below the national average and even worse than some of the poorest States.

Kalpana was the youngest in her family, one of three girls. Against the background of the prejudice against girls from birth, the significance of this fact has not been lost on anyone. And while in her life, not much was said about this, it is clear that with her passing, the very fact that a girl from such a background could literally reach for the skies makes her story all the more poignant and memorable. The genuine feeling of loss expressed by so many also reveals another aspect of this tragedy: the thirst amongst the young for role models, for people they can aspire to be like. Who can girls look up to as they grow up today? There are few women in public life that inspire, women who have done something different, something that women were not expected to do.

In death, women like Kalpana are deified, but the lessons from the choices they had to make to achieve this iconoclastic status do not inform the way girls are brought up today.

Although India has a strong tradition of science teaching and learning, there are hardly any women who have made it to the top in our scientific establishments. If they exist, we do not hear of them. And we know from the few who do speak out of the struggle to balance home and family commitments with the strong demands on time that research in science needs. Girls like Kalpana had to break away from the bonds of home and family to be free to do what they wanted. It is a story too often repeated. And it is tragic. Because in death, women like Kalpana are deified, but the lessons from the choices they had to make to achieve this iconoclastic status do not inform the way girls are brought up today.

Forget the fact of sex pre-selection and the horror attached to female infanticide. Think of the pressures that young girls, those lucky to be born at all, grow up with today. They have many more choices than what we had, and even those women of Kalpana Chawla's generation had. Yet, the pressure to conform remains unchanged. From the moment you begin approaching the age where you have to choose your subjects in school, there is pressure. Choose science, not arts; choose arts, not science; do home science and learn to be a good wife; choose commerce and join the family business; choose medicine and join the family business, etc.

If you manage to evade that pressure, you are faced with the next hurdle, the stream to choose in college. The choice of whether you want to go to university or not is rarely left to the individual to decide. And once you complete what is considered basic education, the "older and wiser" members of your family similarly dictate the choice of careers. At the end of this battering, only the very determined stick to the course that they have chosen for themselves. The majority quietly fall in line. And never know what it is like to dream, to aspire, to work for something that seems beyond your capability.

This is really why Kalpana's story has struck a chord with so many young girls, not just those who have chosen engineering, or courses similar to the one Kalpana took, but even those who have never aspired to be astronauts or to fly a plane or do anything more adventurous than choose their own careers. I hope Kalpana Chawla's smiling face will make mothers and fathers pause before they start hounding their daughters to make safe, predictable choices. I hope it will make them realise the value of daughters. I hope it will make them realise that every individual deserves the right to dream.