Seva Mandir's experiment in organising the poor to protect their own village commons is now part of a book, The Waste Land: Making of Grass-roots Leaders. Deepti Priya Mehrotra reviews this chronicle of important work at the intersection of local governance and ecological issues.
01 May 2004 -

Can ordinary, poor people bring about extraordinary changes in their lives and assert their right to protect the ecology and natural wealth of their common lands? In the book 'The Waste Land - Making of Grass-roots Leaders', author Nandita Roy tries to answer this question. The book documents an experiment in collective organisation by the poor in order to protect their village commons in Rajasthan.

Roy, who travelled to remote parts of Udaipur district during her research, notes that "'The lush forest that turned into a barren landscape' is an oft-repeated statement that one gets to hear again and again in this region of Rajasthan." And for more than three decades, Seva Mandir (SM), an NGO, has been working systematically to reverse this trend.

SM was set up in 1969 in Udaipur city. During the '70s, the organisation concentrated on the promotion of adult education. Emboldened by villagers' positive response to education, in the early '80s SM mobilised village groups to claim development and social services from the state. This strategy had mixed results since neither state officials nor SM - or the local people - actually knew how to fight poverty and drought.

In the mid-'80s, the organisation switched to constructive strategies and decided to participate in the government's wasteland development programme. SM's work involved changing vast tracts of degraded land that were once forested. It worked with poor peasants living in these hilly tracts, traditionally dependent on natural resources for their livelihood. Plans to build water storage structures and undertake systematic land improvement were made. Within a year or two, wasteland development became SM's largest programme, spreading to around 200 villages, with 5000 peasant families having planted about 2 million saplings. 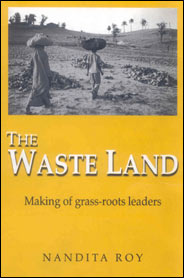 Simultaneously, people were motivated to form pressure groups to win back common lands. The commons - which included forest lands under the custody of the forest department; pasture lands under the custody of panchayats (village councils); and revenue lands under the care of the revenue department - had largely been encroached upon. Persuading people to give up lands they had effectively privatised requires very high levels of leadership. Ad hoc and illegal takeovers resulted in something like 80 per cent of the commons being unavailable for development.

In 1991, the concept of collective action for sustainable land use received a boost with the introduction of the Joint Forest Management scheme. In '94, the government provided substantial financial resources for watershed development programmes to be managed by local community institutions.

During this period, it became clear to SM that structural factors were responsible for people's continued poverty. Underlying social and property relations would have to be addressed. Solidarity for collective action would have to be consciously fostered. There were class, caste/tribal and gender divides within the local villages. Communities were not cohesive, and getting people to organise proved to be an uphill task.

SM selected and trained village people to supervise and coordinate the entire wasteland development programme. Several of these village workers began to blossom into village-level leaders by the '90s. People like Ishwarlal, Mani Devi, Pannalal Rebari, Savita Devi, Bhima Dhula and Gomji Salve are shining beacons of light today. These grassroots leaders are from various castes and tribal backgrounds. Most have lived in hardship since childhood, with at most a few years of schooling. Like many young people in the area, they were at a loose end at the critical juncture when they came across SM and were accepted on the staff. Through dedicated hard work and commitment, some of them have shown very positive results within a very short time.

Ishwarlal of Umria village has been responsible for protecting forests in eight panchayats, developing seven pasture lands, setting up six forest protection committees and two reservoirs. Initially, Ishwarlal, like many other leaders, had to struggle against villagers' apathy and mistrust. When he mobilised 30 families from Umria to plant trees on their land, people suspected it was a ploy by the government to takeover their land, and that SM was putting up a front for the government. It took hard work to bring them round. In 2002, Ishwarlal was given the Umedh Mal Lodha Award for exemplary community leadership.

Mani Devi of Dabasia village was elected to the panchayat (village council) in 1995. A year later she joined SM. Absolutely illiterate at the time, she worked hard to develop literacy skills by attending literacy camps and practising rigorously. Today she writes all official reports herself; has facilitated the opening of the village's first school - Rajiv Gandhi Pathshala - and taken effective steps to protect the village forests against theft and encroachments.

Ad hoc and illegal takeovers resulted in something like 80 per cent of the commons being unavailable for development.

•  Coping with the cruel summer
•  In Pictures: Samaj Shilpis

Similarly, Pannalal Rebari, Savita Devi, Bhima Dhula and Gomji Salve have been instrumental in bringing about significant changes within their village communities. However, women's leadership roles still need a lot of nurturing and support. Savita, a tribal, says men in the village make fun of her, saying they value their wives and will not let them go out alone. In her book, Roy has profiled 12 such village leaders.

The book also describes how villages like Selu, Bada Bhilwada, Kasya and Karmala have shown the way towards collective organisation. Roy writes about the pioneering activities of Van Uthaan Sangh - a federation of 40 forest protection committees - and that of the Selu Village Committee in afforestation and protection of the forest lands.

The idea of introducing a wider readership to the good work performed by SM and its village-level leaders is worthwhile. One wishes however for a less repetitive, more crispy style. Roy was entrusted with this documentation by NFI, where she works as a senior programme officer. The book offers only weak (and often non-existant) analysis of the things she reports on, and it is left to Neelima Khetan, Chief Executive of Seva Mandir, to balance this out to some extent by her crisp framing of issues in the foreword to the book.

Despite its shortcomings, this is a useful book. Its subject matter is of overwhelming significance. Protection and improvement of common lands is indeed a critical need of the hour. Where lush landscapes have turned into barren wastelands, any effort to green the commons is too important to be ignored.

Deepti Priya Mehrotra is a Delhi based freelance journalist, she writes on social issues. The Waste Land: Making of Grass-Roots Leaders by Nandita Roy is published by the National Foundation of India (New Delhi) and Seva Mandir (Udaipur).