The Jerdon's Courser is the latest endangered species to be caught in the path of unregulated development. Its habitat in wildlife sanctuaries in Andhra Pradesh is threatened by illegal construction activity within the protected lands, and environmental activists have taken the matter to court. Kanchi Kohli reports.
03 March 2006 -

A canal to quench the thirst for 'development'; an endangered bird and its habitat; construction within a wildlife sanctuary; the Supreme Court of India. What is common to these? Answer: they all merge into a single tale that challenges the execution of the Telugu Ganga Project in the Lankamalleshwara Wildlife Sanctuary and the Sri Penusula Narasimha Wildlife Sanctuary in Cuddapah district of Andhra Pradesh.

The Telugu-Ganga Project in Andhra Pradesh was developed with the aim to bring the Krishna river waters from the Srisailam reservoir through an open canal to the Somasila reservoir in the Pennar valley. From Somasila the water is taken through a 45-km-long canal. The understanding is that 12 thousand metric cubic metres (TMC) of water will be delivered to Tamilnadu to increase the water supply to Chennai. Interestingly, Suresh Prabhu, the chairperson of the Task Force on Interlinking of Rivers in India during the NDA government, had essayed this project as an important example of inter-basin water transfers executed in South India in the 19th and 20th centuries, to set the tone and feasibility for the interlinking of rivers in the country (See: http://pib.nic.in/feature/feyr2003/faug2003/f110820032.html).

Enter the Jerdon's Courser (Rhinoptilus bitorquatus), one of the world's rarest birds, found only in Andhra Pradesh. It was first discovered by T C Jerdon in c.1848. According to a report by the Bombay Natural History Society (BNHS), till 1900, some birds were recorded near the Pennar river and the Godavari river valleys near Ananthapur. Subsequently, efforts by several ornithologists to record the bird remained unsuccessful, which led to the belief that the bird had become extinct. However, it was rediscovered in January 1986 near Reddipalli village of Cuddapah (Kadapa) district, in an area designated for the Sri Lankamaleswara Wildlife Sanctuary. Still, with only a few birds sighted, today the Jerdon's Courser is categorized as critically endangered in the World Conservation Union's Red List and is also listed under Schedule I of the Indian Wildlife (Protection) Act 1972, and is considered as priority species under the National Wildlife Action Plan (2002  2016) of the Government of India. [1] 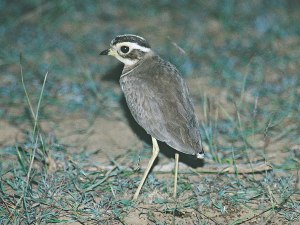 The Courser's first encounter with the Telugu Ganga canal was quite positive. At the time the Jerdon's Courser was rediscovered, its scrub jungle habitat was under threat because of the construction of the canal project. But the Andhra Pradesh Forest Department (APFD) pre-empted this threat and pushed for the declaration of the Sri Lankamaleswara Sanctuary (SLWLS) primarily for the conservation of the Jerdon's Courser and its habitat. This resulted in adjustment of the proposed course of the canal, to avoid the Sanctuary. Later, the bird was also recorded in the adjacent foothills, and this area was then declared as the Sri Penusula Narasimha Wildlife Sanctuary (SPNWLS).

That, unfortunately, was not the bird's last encounter with the mammoth project. Almost two decades later, the Telugu Ganga canal and the Jerdon's Coursers reconnected, when the work on the canal was undertaken - within the SLWLS illegally - for the purpose of irrigating the lands in the Sagileru river valley.

According to a December 2005 survey conducted by the Bombay Natural History Society [2, see here], "During the last week of October 2005, from Venkatasettipalli in the Siddavattam to Badvel main road, excavating machinery in the scrub jungle near Sri Lankamaleswara Wildlife Sanctuary was noticed. Visits to that site revealed that it was the excavated Telugu-Ganga Canal." The report further highlights the immediate action that was taken in informing the local forest officials of this illegal construction; the officials acted quickly to stop the work on 23rd October 2005, and levied a fine of Rs.15,000 on the contracting company, IVRCL.

It was subsequently reported, however, that IVRCL and the irrigation department continued to carry out illegal excavationa in November 2005. With this in mind, a case was filed by Bittu Sahgal, editor of the publication Sanctuary Asia, before the Central Empowered Committee (CEC), a monitoring body on forest matters set up by the Supreme Court. The application challenged the illegal execution of the Telugu-Ganga Project in the two sanctuaries.

The Courser's first encounter with the Telugu Ganga canal was quite positive. But two decades later, the protections of the first brush with 'development' would return to haunt the bird.

One of the main allegations in the application before the CEC is that the Telugu Ganga division of the Andhra Pradesh irrigation department has not obtained the mandatory clearance under Section 2 of the Forest (Conservation) Act, 1980 - which relates to the restriction on the dereservation of forests or use of forest land for non-forest purpose. Clearance has also not been sought under Section 29 of the Wildlife (Protection) Act, 1972 which prohibits destructive activities in a sanctuary without a permit. The illegal excavation, says Sahgal, is also in violation of the 14.2.2000 order in I.A.548 in the T. N Godavarman Thirumulpad Vs Union of India (W.P 202 of 1995); according to this order there can be no removal of dead, dying, diseased trees, etc. from any National Park or Sanctuary.

The application is largely based on the BNHS survey report, and quotes the mapping of the canal route and other disturbances that was carried out by the survey team. It highlights, "Canals were about 16 to 20 metres wide. But the area cleared for preparing this canal is from 80 to 100 m. Stones and the soil was dug up and piled all along the canal route. Roads were constructed on either side of the canal by using the soil as well as soil dug up from the nearby area. Trees and shrubs, which are on the path of the canal route, were uprooted and thrown aside."

The survey report includes a number of facts with reference to the endangered bird and also the threats to its habitat. It elaborates extensively on the canal routes and highlights exactly how these would impact the habitat of the Jerdon's Courser. In its conclusion, the report brings to notice three major threats, which include:

While raising these points, the report makes one other very interesting observation - about the link between the grazing of livestock and the existence of the Jerdon's Courser. It states, "all known Jerdon's Courser sites are already used for grazing of livestock and woodcutting, but at moderate levels which may help to maintain a suitable vegetation structure for the Jerdon's Courser. However, increased use is likely to reduce the density of the bushes below that suitable for the species." This is an extremely important example of how some amount of human activity in an area like the Jerdon's Courser habitat would be needed for the existence of the bird. But too much or too little human activity would both be bad for the Courser - too much would destroy its habitat, and too little grazing would allow the grasses to grow to a height that would not be suitable for the bird.

The Sanctuary Asia web site urges people to take action. Though the canal work inside the sanctuary has now stopped thanks to the efforts of the forest department, work on another canal along the SPNWLS boundary continues. On the web site, Sahgal adds, that "a total of about 22 hectares of the SLWLS habitat including scrub jungle, the preferred habitat of the Jerdon's Courser, has already been lost and if the canal is allowed to go ahead, we will lose about 50 hectares of suitable habitat."

While the matter is pending before the CEC, the reality is that IVCRL has got away with a small fine of Rs.15,000 for its violation of the Forest Conservation (FC) Act, 1980. Interestingly, the FC Act does not mention financial penalties, but clearly states in Section 3A, that whoever contravenes or abets the contravention of any of the provisions of the Act shall be punishable with simple imprisonment which could extend to fifteen days. At future hearings in the case, this provision may be invoked.

The case of the Jedson's Courser is also a reminder of something else; it has now become regularly the case that court interventions are needed to ensure even the most common-sense or rudimentary legal standards that environment officials are expected to uphold. Repeatedly, environmentalists observe that violations of habitat protections for various species occur around the country, and the attention of the Supreme Court is sought to halt these. The Court too, while appointing a monitoring committee for responding to such petitions, has had only a limited impact - new incursions occur time and again, and old ones often continue, indicating that strictures and fines by the judiciary are not a sufficient deterrent to the illegal activities. It remains to be seen if the Courser's fate will steer a different course, or be subject to the same deficiencies that have long plagued habitat protection and regulation.