In January, the Ratan Tata-chaired Investment Commission green-lighted coal-to-liquids (CTL) technology for India and the goverment appears eager to develop policy to promote CTL. But beyond the pressing demands for energy security and new investment lies a starker reality less seen by the public, notes Sunita Dubey.
23 March 2007 -

Seventy-two per cent of India's crude oil requirements is currently imported and with India's substantive reserves of coal, coal-to-liquids (CTL) technology has attracted the interest of policy makers in New Delhi. In January, CTL got a major impetus when the three-member Investment Commission, set up by the Ministry of Finance recommended CTL as a feasible technology for India. Sasol, the South African company which pioneered making liquid fuels from coal during the apartheid era, is now interested in bringing its technology to India. But the two aspects least talked about are the environmental (pollution) and social (health) costs of this technology, especially in a world where governments are still struggling to deal with climate change from carbon emissions. 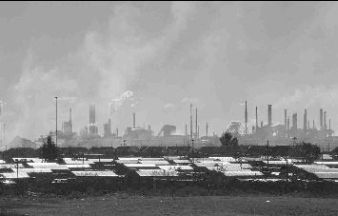 Highly subsidised by the South African government and reaping benefits from its oppressive policies, Sasol flourished under the apartheid regime (when international sanctions blockaded oil imports into South Africa) and it is today one of the top petrochemical companies in the world with a market worth of $18 billion and offices in 20 countries. But Sasol's past and present record is one of ongoing assault on the environment and poor black communities in South Africa. Despite this, Indian government and industrialists, including the likes of Ratan Tata are more than eager to join hands with Sasol for business opportunities in India.

In the 1950s, after unsuccessfully looking for oil, South African government started exploring the possibility of turning coal into liquid fuels and established the South African Coal, Oil and Gas Corporation Limited, which later became Sasol Ltd. The company started synthetic fuel production in 1955 through a process first developed in the 1920s by two German chemists: Franz Fischer and Hans Tropsch. This so-called 'Fischer-Tropsch' process converts solid coal into a gas, which is then combined with hydrogen under high pressure and temperature to produce synthetic crude oil that can then be refined.

Environmental and social costs apart, CTL is only economically viable in a world of high oil prices.

CTL plants require enormous investments - about $1 billion dollars for a 10,000 barrel/day facility, and up to $6.5 billion or more for a large-scale 80,000 barrel/day plant with a five-seven year lead time.

Synthetic oil produced from coal was used by Nazi Germany to fuel their war machine. After World War II, the vast oil fields of Arabia made it uneconomic for most nations to pursue the coal-to-liquids (CTL) technology. However, with the institutionalisation of apartheid in 1948, South Africa picked up the technology where Nazi Germany left off. Sasol started its first plant in 1955 in Sasolburg (a whole town was created for this company), benefiting from cheap land, labour and government incentives. A township called Zamdela was created to house workers drawn to the growing industrial area. This black township was located downwind from the industries, and it became the twin to the white Sasolburg as per the apartheid planning. As was common under the apartheid regime, the white population (13 per cent of the total) consumed most of the oil, whereas black communities were bearing the impacts of its production.

The oil crisis in 70s led to company's big expansion project in Secunda near Johannesburg. Sasol has now also diversified into mining, refineries and petrochemicals.

Limited resources, soaring oil prices, and an increasing concern for energy security have generated a renewed interest worldwide in CTL and in companies like Sasol. With a rapidly growing economy, India's thirst for oil is increasing dramaticallyin 2005-06 it consumed 120 million tonnes, with a nearly six per cent increase in consumption from 2004-05. This increase in consumption was the outcome of the growth of personal motorised transport and the rise in share of road haulage. Furthermore, and as noted at the beginning of this article, given that nearly 72 per cent of its crude oil requirement is currently imported, India is looking for technological solutions that can reduce these imports, while still meeting the increasing demand.

CTL technology is considered particularly attractive, as India has significant coal resources. In 2000, a delegation from India's Coal Ministry visited Sasol, appraised its CTL technology and submitted a report to the Ministry. The team recommended setting up of a task force of experts to look into the feasibility of converting coal into oil and also to initiate a dialogue with Sasol for technical help. The task force was never formed, but with increasing oil prices, the CTL technology has now gained a new interest among policymakers. Sasol has also showed interest in bringing their technology to India and it is willing to invest around $6 billion (around Rs 27,000 crore) in an Indian coal liquefaction project.

As noted at the begining of this article, CTL also got a major impetus when the three-member Investment Commission, set up by the Ministry of Finance recommended CTL as a feasible technology for India in Jan 2007. The commission has Ratan Tata as Chairman and Deepak Parekh (Chairman, HDFC) and Ashok Ganguly (Chairman, ICICI) as members. Based on their recommendation, the Prime Minister has directed the Planning Commission to set up an Inter-Ministerial Group to further examine the proposal and recommend a time bound action plan. Riding on the euphoria generated during the meeting with the Investment Commission, Finance Minister Chidambaram promised that India would consider creating "a fulltime job for an officer to handle the [Sasol] investment and see it through". He also praised Sasol's coal-to-liquids fuel technology and said India would "have to give [Sasol] identified coal blocks" to allow it to begin doing business in India. Sasol currently has an office in Mumbai.

But wait, what about the load of pollution?

Although CTL might very well be an important technology for enhancing Indias energy security, the question remains as to whether the government has fully considered all its other impacts. South Africa, which was used as a testing ground for this technology, is a burning example of pollution and health effects caused by Sasol's CTL plants in Sasolburg and Secunda.

Effects of pollution from Sasol's operations are not borne by the company, but are rather externalised onto the mostly poor black communities who pay with their health. Under the apartheid regime, Sasol worked with minimal pollution regulations, especially when the pollution primarily affected its black population. Sasol's own reports in 2001 noted that annual emissions from its Sasolburg plant alone amount to over 42,000 tonnes of volatile organic compounds (VOCs), 22,000 tons of hydrogen sulphide and 26,000 tonnes of sulphur dioxide. 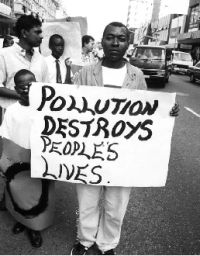 According to a study done by Groundwork (an environmental justice group working in South Africa) -- air samples taken in Sasolburg showed very high levels of benzene and hydrogen sulfuide. Long term exposure to benzene could result in anaemia and leukaemia, and hydrogen sulphide is linked to respiratory problems. Statistics from clinics in the area do indicate high rates of anaemia, asthma and other respiratory problems among the local community near Sasolburg. Sasol's impact on poor black communities also extends beyond Sasolburg.

It is only because of ignoring such health and environmental problems that Sasol's fuels are relatively cheap.

It is not that things changed after the apartheid era ended. During apartheid, pollution control was on voluntary basis. Companies like Sasol were the building blocks of the regime, and were thus never put under the pollution control radar. But post apartheid, the 'National Environmental Management: Air Quality Act' was signed by President Mbeki only on 19 February 2005, after 11 years since the first elections. And like India, South Africa is marred with problems of monitoring and implementation of its environmental laws.

CTL technology in India will come with enormous economical, social and environmental costs. Given Sasols poor environmental and social record in South Africa, one can only wonder what will happen in India. The poor record for enforcing pollution control for big, important projects in India will mean that Sasols profit will once again get subsidised by poor communities living around the proposed mines and plants, if this project comes through.

Furthermore, there are also serious economic issues to consider. Pat Davies, the CEO of Sasol said in January that the company "needs a tax regime in India that will give incentives to them". After enjoying tax incentives in the apartheid South Africa, Sasol is demanding the same in India. While considering the provision of incentives, it is important to recognise that CTL is only economically viable in a world of high oil prices. In fact, the United States experimented with CTL in 1979 by creating a Synthetic Fuels corporation (SFC), assuming high oil prices in the 1980s. Although SFC invested in six CTL projects, all its products became unviable due to a sustained drop in oil prices in 80's, and SFC was terminated in 1985. This example shows that it is economically risky to build a government supported programme on assumptions about future world oil prices. CTL plants require enormous investmentsabout $1 billion dollars for a 10,000 barrel/day facility, and up to $6.5 billion or more for a large-scale 80,000 barrel/day plant with a five-seven year lead time.

Furthermore, with the looming challenge of mitigating global warming, should India be investing in high carbon emission technologies? According to a recent MIT study, the conversion of coal to synthetic fuels and chemicals requires large energy inputs which in turn result in greater production of carbon dioxide (CO2). Even if the CO2 emissions from the manufacturing process can be captured and sequestered, combustion of the resulting fuel would still put more CO2 into the atmosphere than conventional fuel would. The study says that synthetic fuels derived from coal produces a total of 2.5 to 3.5 times the amount of CO2 produced by burning conventional hydrocarbons. Seen in this light, any move towards CTL is going backwards not forwards.

When the whole world is talking about less dependence on fossil fuel, India is planning to invest money and resources in a technology which is not only highly capital intensive but also highly polluting. Furthermore, the environmental and social costs associated with CTL cannot be seen in isolation from the associated reliance on coal mining. India's total coal production in 2005 was approximately 360 million tonnes coming from 560 operational mines, and this is increasing every year. Indian coal mining itself is associated with very poor conditions for workers. With India's ambitious plan to turn coal into liquid, the devastation by additional coal mining will be of major concern, in addition to the pollutants from CTL.

Thus far, only the energy security and foreign investment opportunities of CTL have been discussed and put forth for the public. But it is important for the government and the public to be aware of the environmental and social costs of CTL while making large investment decisions in the country. Furthermore, it is also important for advocacy and environmental groups to keep a close eye on Sasol's activities in India now, rather than protesting against its plants once they are already built.

Sunita Dubey is based in Boston and is a coordinator of Groundwork, which works on environmental justice issues in South Africa. Ananth Chikkatur provided critical comments and suggestions on this article.