A complete and accurate database of dams and rivers in the country is the first pre-requisite for analysing hydrological issues and safety, but an analysis by Himanshu Thakkar shows that the authority entrusted to maintain such records clearly has a long way to go.
08 March 2013 -

The Central Water Commission, or CWC, is India's technical organisation under the Union Ministry of Water Resources. It publishes the National Register of Large Dams (NRLD), the latest version of which can be seen at: this link. This is a key document that is meant to provide information about large dams in India.

The latest NRLD seems to have been uploaded only recently, since for a number of states, it claims to have been updated till January 2013. The NRLD is certainly a useful document, the only list of large dams in India and it also gives a number of salient features of the large dams in India. The South Asia Network on Dams, Rivers and People (SANDRP) has been using this document and doing some analysis of the information available in the NRLD. 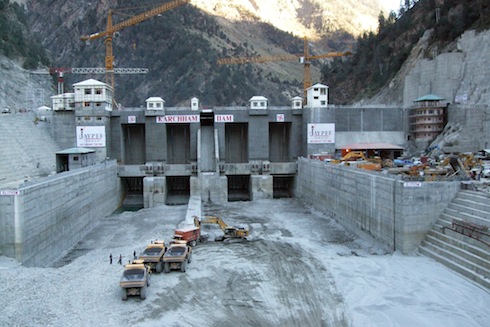 As per the latest edition, India has 5187 large dams (height above 15 m in most cases, height of 10-15 m in the case of some with additional criteria). 371 of these dams are under construction and the rest have been completed. In case of 194 large dams in NRLD, we do not know the year of construction, which means most of these dams must have been built before independence.

In Himachal Pradesh alone, the following dams are all under construction as per the Central Electricity Authority, many of them in advanced stages, but they do not figure in NRLD: Allain Duhangan, Kashang, Sainj, Swara Kuddu, Shongtong Karcham, Sorang, Tangnu Romai, Tidong. This poses a serious threat to safety, especially since many of them are under construction by private companies.

•  The power' to protect rivers
•  Going awry with the flow

To illustrate, in Himachal Pradesh alone, the following dams are all under construction as per the Central Electricity Authority, many of them in advanced stages, but they do not figure in NRLD: Allain Duhangan, Kashang, Sainj, Swara Kuddu, Shongtong Karcham, Sorang, Tangnu Romai, Tidong. This poses a serious threat to safety, especially since many of them are under construction by private companies.

For example, in December 2012, heavy leakage was detected in the surge shaft of the 1000 MW Karcham Wangtoo Project on Sutlej River in Kinnaur district in Himachal Pradesh. The project had to be shut down and the repairs are still going on. Had there been a serious mishap at the project, the impact would also be felt by the cascade of projects downstream, including the 1500 MW Nathpa Jakhri HEP (India's largest operating hydropower project), 412 MW Rampur HEP, 800 MW Kol Dam HEP and the Bhakra complex further downstream.

Incomplete records or omissions make prevention, tracking and management of such emergencies difficult. 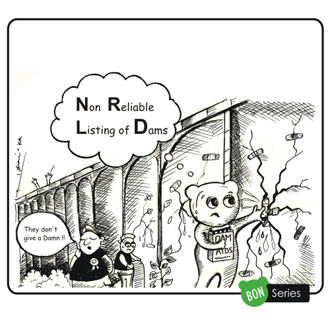 Earlier in 2010 and 2011, SANDRP filed a number of applications with the CWC under the Right to Information Act to ask them how a very large number of dams that were listed in earlier NRLD records of 1990, 2002 (both printed versions) did not figure in the NRLD 2009, and many of the large dams listed in 1990 also did not figure in NRLD 2002. The CWC response in most cases was to transfer our RTI application to the relevant states, stating that it is not responsible for the accuracy or completeness of information in the NRLD, it merely compiles the information given by the respective states.

This was a far from satisfactory response from India's premier technical water resources organisation. Was CWC acting only as a post box on such a serious issue as listing of large dams? It was not applying its mind to the information supplied by the states, not raising any questions, nor clarifying the contradictions and gaps with respect to the earlier editions of NRLD? Needless to add, this reflects very poorly on the CWC.

Here, it is notable that the CWC is also responsible for the monitoring policies and practices related to the safety of dams in India as also a number of other aspects. What kind of diligence then can we expect from CWC under these circumstances? Our analysis also showed that many dams that should have figured in the earlier versions (considering the date of completion stated in the subsequent editions of NRLD) were not there. Again, our applications for clarification in such cases were transferred to respective states.

We did get some response from the Central Water Commission and Maharashtra, which was once again hardly acceptable. In case of over a hundred dams, the CWC Director, Design and Research Coordination Directorate accepted the errors in NRLD and promised that 'Data entry errors/ omissions as indicated above will be rectified' without any satisfactory explanations.

Where are our dams located?

A quick review of the latest NRLD raises some fresh questions. In one of its exercises, SANDRP wanted to check how many dams there were in the different river basins/sub basins. This is an important question from a number of perspectives including cumulative impacts, optimisation of dam operations, hydrological carrying capacity and cumulative dam safety issues, to name a few. Ostensibly, this should have been a simple enough exercise.

However, when we started looking at the 5187 large dams of India listed in the NRLD, we found that in most cases, there is no name for the river on which the dam is constructed. When counted, we were shocked that in case of 2687 or 51.8% of large dams of India, the NRLD does not mention the name of the river! In most cases they just write 'local river' or 'local Nallah,' or the box under river is left blank. Under the circumstances, it is not possible to get a clear picture of any river basin, or use the list to identify cumulative impacts or safety aspects or possibility of optimisation of the dams in any one river basin. The absence of such basic information reflects very poorly on the quality of the NRLD, and on the CWC and respective states.

India's largest dam builder state, namely Maharashtra, also has the largest number for which it does not know the name or location of the rivers or tributaries. Out of 1845 large dams in Maharashtra, for 1243 cases, Maharashtra does not know the name of the rivers on which these are constructed! That means in case of 67.37% of its dams, the state has not specified the names of the rivers. It is not just for the old dams, but even for 81 of the dams completed after 2000, that this holds true - for example, the relatively larger 61.19 m high Berdewadi dam (completed in 2001) and the 48 m high Tarandale dam (completed in 2007).

It is a disturbing situation that the agencies that are responsible for our large dams do not even know the names of the rivers on which they are located. Every river in India has a name, so if someone were to argue that these rivers do not have names, it wouldn't be an acceptable excuse. Without the names of the rivers and locations of the various dams on specific rivers, we cannot even start looking at crucial issues such as dam safety, cumulative social and environmental impacts, and hydrological carrying capacity and optimum utilisation of the storage created behind the dams. We clearly have far to go to even start knowing our dams and rivers.

Himanshu Thakkar is with South Asia Network for Dams, Rivers, and People.