A multi-state campaign to draw attention to the adverse effect of agriculture and trade policies on sugarcane farmers has just ended. Padmalatha Ravi spoke with farmers and campaign coordinators in Tamilnadu, and traces the growth and decline of agricultural families' fortunes around this crop.
23 November 2005 -

Hundreds of farmers, students and volunteers worked around the clock to gather one million signatures for a "make trade fair" campaign that ended last week. The drive, concentrating on sugarcane farmers in the region, was to protest dumping of sugar in the country by foreign producers; campaigners hope to make India self-sufficient in sugar production. Muthuvelayudham of CCD says "the main aim is to put an end to export oriented industrialization and to concentrate on self-sufficiency and restoring indigenous farming processes lost due to globalization and liberalization." He argues that the farmers are the biggest losers in the globalization game.

The one-month-long campaign was launched on 16th October simultaneously in Orissa and Tamilnadu. Covenant Centre for Development (CCD), an NGO from Tamilnadu, spearheaded the movement in all south Indian states and in Orissa. Cycle rallies in Sooranam in Madurai and Bhubhaneshwar, Orissa marked the launch.

Developed countries provide high subsidies to their farmers which makes farming financially viable in those nations. Further, by clever manipulation of their subsidy reduction commitments, rich nations have increased the support to farmers in the developed countries. The subsidies allow producers in developed nations to compete globally; trade policies that have forced open the markets of developing countries additionally make Third World farmers vulnerable to the imports of highly subsidised products. India has seen a massive increase in the imports of agricultural commodities and products from about Rs.50 billion in 1995 to over Rs.150 billion in 1999-2000 - a three-fold increase in only a few years. 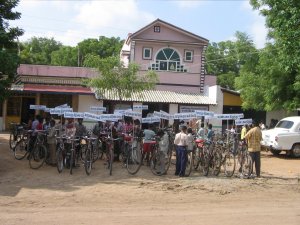 Students on a bicycle rally during the launch of signature campaign in Sooranam, Tamilnadu.

Trade policies crafted far from their lives nonetheless affect farmers in significant ways; the woes of Indian sugarcane farmers attest to this. With fifteen acres of fertile land, two wells that contain water sufficient for whatever crop one wants to grow, 72-year-old Mookaiah I from Palamedu, Tamilnadu should be in a good position, but he begs to differ. He and his family have been living hand-to-mouth for the last four years. Traditionally a sugarcane farmer, Mookaiah now has no money to cultivate sugarcane or any other crop. His land stands barren. Until the 1950s Mookaiah and his family cultivated sugarcane and used it to make jaggery. And when Tamilnadu government decided to open a cooperative sugar mill at Alanganallur in Madurai, he along with other sugarcane farmers decided to sell their produce to the mills.

Selling cane to sugar mills was the easiest thing, he says. "The mills took care of everything. They gave us the seeds; they told us what kind of fertilizers to use and they arranged labour for harvesting too. We got paid handsomely. We were promised that this arrangement would not be disrupted." This was better than making jaggery, for which the cost of production would be too high and the market prices would vary depending on the quality of jaggery, which in turn depended on the quality of sugarcane. The farmers didn't have to worry about all that if they just sold their sugarcane to the mills.

"I am a farmer, this is all I know. I am getting affected because of decisions taken by some other countries. If those countries can protect their farmers, our government too should strive to do that. Otherwise people like me have nowhere to go."

Encouraged by the success, more and more farmers opted for sugarcane, giving up other crops like paddy. P Shankar, another farmer from Kottampatti village says "The only crop that ever brought money to a farmer's pocket was sugarcane. Paddy needs a lot of tending and the prices are very low. We cannot even recover costs, where as with sugarcane we used to earn a lot of profit."

Tamilnadu alone has 38 mills, of which 19 are privately owned. India is one of the leading manufacturers of sugar, and one of the largest consumers too. Tamilnadu's share in the sugar industry was considerable. But the good times did not last. Drought affected the total yield in many parts of the state. Meanwhile the Indian economy was opening to international trade. This meant that commodities - including agricultural commodities - could be imported and would be available at cheaper prices, leaving the local economy no room for competition. As a result four sugar mills - two cooperative mills, one public sector and one private sector mill were shut down. Farmers either had to stop cultivating sugarcane or sell it to other mills far from their villages. This second option was not a viable one, however, as the harvested sugarcane had to be crushed within 24-hours to get maximum yield.

The State government maintains that non-availability of raw material is the reason the mills were closed. However the truth lies elsewhere. Sugarcane is the only agricultural product whose price is wholly decided by the government. Every year the Central government fixes the floor price for the following year - the Statutory Minimum Price (SMP). However the Centre does allow the State governments to decide the price of sugarcane at a higher level, at a Statutory Advice Price (SAP); this is what the farmer gets for his yield. State governments, in order to support farmers during the drought years, fixed the prices for the sugarcane higher. Some of the private mills who had the capacity to raise the additional money and increase production for sales in the open market - or overseas - managed to survive. Increased production of by-products such as mollasses, bagasse and co-generation plants through which they sold excess power to the state electricity board also helped immensely. But cooperative mills, which had to sell 65 to 90% of the manufactured sugar only through the Public Distribution System (PDS), could not break even. Their worries compounded by consecutive years of drought, these mills had no choice but to shut down.

As result, farmers like Mookaiah have sunk deeper in debts. He says "I am a farmer, this is all I know. I am getting affected because of decisions taken by some other countries. If those countries can protect their farmers, our government too should strive to do that. Otherwise people like me have nowhere to go." CCD's Muthuvelayutham says that it is such inequalities that they intend to fight. Staff and Volunteers of CCD are busy educating people about the trade policies and how they affect individual farmers. "It is not just economic independence which is at stake here. Such industrialisation has almost ended our traditional way of agriculture and the cultural aspects that it had brought along. And if a signature campaign is the way to bring it back, we will", he says.

"Make Trade Fair" intends to present these signatures at the sixth WTO Ministerial Conference in Hong Kong in December and demand that developed countries should stop unfair trading policies, such as dumping subsidised produce that affects the local economy adversely. The current round of WTO negotiations is purportedly to concentrate on Development. But the supporters of fair trade here argue that the meet will truly be a "development round" only if the developing and under developed countries are given a chance to protect their economies. A sentiment thousands of farmers like Mookaiah and Shankar share with them.

Padmalatha Ravi is an independent journalist associated with The Quest Features & Footage, Kerala.