These days, select impoverished neighbourhoods in Chennai have become the nursery of future champion boxers. Girls in these neighbourhoods are receiving training in boxing, something that has given them the confidence to stand up for themselves and dream big, reveals Hema Vijay.
11 March 2016 -

Every day after they are done with their classes Chithra, Mercy, Kalaivani, Gayathri and others make a beeline for a sandy ground located near the Police Boys Girls Club and the Housing Board tenements of Kannagi Nagar, one of Chennai’s suburban localities chosen by the state government’s slum clearance board to relocate the city’s poorest. This is where the youngsters spend a few hours working out followed by some sessions of boxing held under the watchful eye of their coach, J. Narmada, 23.

Whereas they don’t have access to even the most basic boxing gear like a punching bag or a proper rink, they have to share a single pair of gloves among 35 girls, and the most nutritious diet they can afford is millets porridge with an occasional egg, such deprivations haven’t stopped them from performing well at divisional level boxing tournaments. 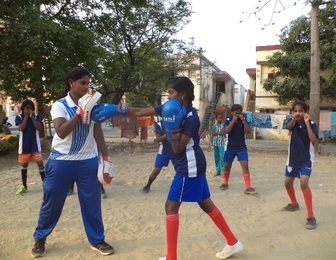 “Chennai girls are the best. They have the guts to dream. They have no doubts that they can punch their way to the Olympics, even though they don’t have boxing gear or training facilities like those available to their counterparts in states such as Manipur where boxing is almost a part of regular schooling,” remarks a proud Narmada.

This young coach’s face lights up when she talks about “my girls”, and how much they have progressed in the last few months. “With just four months of training, the girls at Kannagi Nagar have managed to bag two gold and two silver medals at the Divisional Level boxing tournament held in Kancheepuram district besides one gold medal and three silver medals at the Chennai Divisional tournaments. Imagine how far they can go with intensive training and the right equipment,” she points out.

Narmada perfectly understands the tough circumstances those training under her face on an everyday basis. Like her parents, those of her pupils, too, eke out a living as fishermen or daily wage labourers. The only silver lining to the poverty they live with is this – being unaccustomed to an easy existence, they are eager to grab the few opportunities that come their way, are extremely tough and spirited, qualities that give them a definite edge in a ruthless sport like boxing.

Today, Narmada is a heroine to these primary and secondary school girls. And why not, she and her friends train them for free, week after week. The sessions take place after school hours, and sometimes, during school as well. 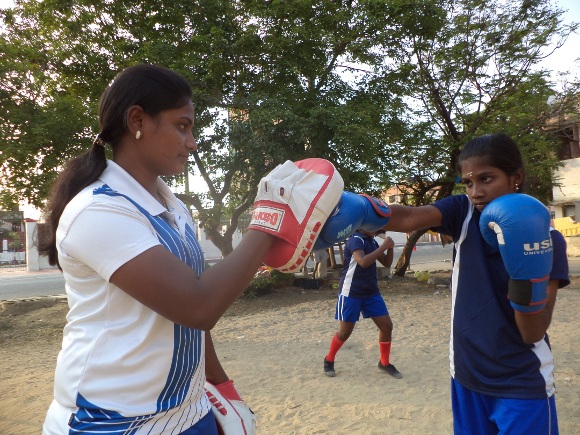 Coach, J. Narmada, 23, is a true heroine for the primary and secondary school girls she trains for free week-after week. Pic: Hema Vijay\WFS

“On my own, it might have been difficult to convince the schools to support the girls’ training, but the fact that I work with Magic Bus, a non profit that works with schools to bring about behavioural changes in children through sports, has been of immense help,” remarks the committed sportsperson, who has won bronze medals at the Nationals in 2007 and 2008, and was named the best boxer at the state level in 2008. She has also won the Gold at the state level in 2006, 2007, 2008 and 2009.

Though she didn’t make it to the international platform, Narmada has made up her mind to ensure that her girls do. To make her “mission” a success she has roped in her old classmates E. Sevvandhi, M. Bhuvaneshwari, M. Nila, and S. Durga to join hands with Magic Bus.

Narmada herself had gotten into boxing in 2006 when she was in Class Six, thanks to a Chennai Corporation initiative. “We didn’t even know what the sport was called, but we would go to tournaments and feel happy when we won a medal,” recalls her friend and fellow player Sevvandhi. It was around that time that the state government had introduced boxing along with judo, karate and other such combat sports for girls in corporation run schools.

Of course, even back then, boxing was not new to Chennai slums; like carom tournaments, men and boys in the lower income neighbourhoods, especially those in north Chennai, had taken to boxing, with local ‘area’ and ‘street’ tournaments holding sway. The craze for this extreme sport perhaps began in the 1970s when the Nehru Stadium in the area had hosted boxing legend Muhammad Ali.

So, how did Narmada’s parents react when she decided to take up boxing? “More than my parents, my relatives were afraid that I would injure myself. My parents were very supportive; though they rue that all my medals and certificates have not come useful as they haven’t got me a job,” she says. Narmada credits much of her own progress to her coach J. Loganathan, who she says has been motivating and guiding her all along. 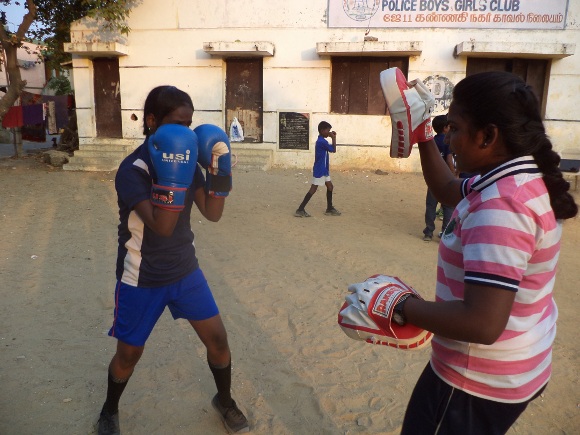 E. Sevvandhi along with J. Narmada, trains the girls in boxing so they can make it to the big league. Pic: Hema Vijay\WFS

After school, Narmada enroled for a degree in physical education (B.Sc. Physical Education) and became an instructor with Magic Bus. As a social worker, her “salary is less, but satisfaction is boundless”. She says, “Frankly, to bring about behavioural change in children, I had to bring in behavioural changes in myself, as I am a role model to them,” she muses candidly. A remarkably talented woman, Narmada works as a gym trainer in the mornings to earn her bread and butter.

At the moment, Narmada’s main priority is to get a few boxing bags and gloves for the girls training with her. As of now, her friends and she have pooled in some money to buy three pairs of boxing gloves that are shared between 100 girls! A pair of gloves costs Rs 2,000, while a boxing bag costs Rs 2,800. They are hopeful that someone would step in and sponsor the same for them.

What does boxing give these young women? “To some extent, the ability to protect themselves. But the crucial thing is the self esteem they develop as they play; it comes with moving to the next level and winning the cash awards at the various tournaments,” explains Narmada. They carry themselves with a lot of confidence, which is crucial for moving ahead in life. “My speed is not what it was but if my girls make it to the big leagues then I will be more delighted than if I would have made it myself,” says Narmada.

Even though it remains to seen whether they make their state and country proud in the future – although they are raring to make it big in the boxing arena – for the time being, the opportunity to play has given them the boost they needed to stand up for themselves and dream.