The era of female impersonators is nearly finished, but in its heyday many men made a good living posing as women, and Chapal Bhaduri was among the best. Shoma Chatterji reports.
21 May 2012 -

At 74, Chapal Bhaduri may be the last living female impersonator - in Indian theatre in general, and in Bengali theatrical performances in particular. His voice has a distinctly female tenor . soft, tinny and thin. Though he is an actor, he keeps a low profile, and is still not used to the glare of flashlights. He lives alone in a small room in old Kolkata, cooks his own food and generally keeps to himself.

Chapal Bhaduri is also gay. It took him many years to open out about his orientation. When it came to be known, it caused him a lot of suffering, pain and social ostracism. Today, he leads a hand-to-mouth existence by dressing up and performing the role of the Goddess Shitala in different temples and street corners of the city. But he holds his head high and seeks neither empathy nor pity for his precarious and lonely existence.

Today, the name and face of Chapal Bhaduri is known to practically everyone in West Bengal because the extraordinary story of his life has inspired three films . one documentary, one telefilm and one full-length feature film that has gone to international festivals. He feels justifiably proud of this, towards the end of his lonely life. Performing the Goddess . The Chapal Bhaduri Story is a documentary by Navin Kishore of Seagull Books. Ushno Taar Jonne (Bengali) is a telefilm directed by Koushik Ganguly in which he played himself in a brief cameo.

The third one is Just Another Love Story (Bengali-English), a feature film directed by Koushik Ganguly in which he narrates his life in camera while filmmaker-actor (in the film-within-the-film) Rituparno Ghosh plays the young Chapal. It is about a young, gay filmmaker who is making a docu-feature on Chapal Bhaduri where Chapal plays himself while the filmmaker plays the younger Chapal in the film-within-the-film. "To act on stage and to emote in front of the camera are two different things. But Rituparno helped me. I was terrified to face the camera. But the way Rituparno has portrayed me as a young woman performing female roles is something I would not have been able to perform myself. I am happy that the gay man need not lead a cloistered life any more like I had to do. He can lead a normal life like everyone else which he actually is," he says.

Despite his modesty, Chapal Bhaduri steals the show from everyone else in the film. He appears his natural self, neither overawed by the media attention suddenly heaped on him, nor scared of the overbearing director who is soft towards him, nor bought over by the extra cheque the foreign producer gives him a 'bribe' to 'reveal more dirty secrets into the camera' as he tells the director within the film, leaving the cheque behind. The pain of a life spent in enforced isolation is brought out beautifully as he narrates his life into the camera without being dramatic about it at any point.

Chapal Bhaduri, alias Chapal Rani, or Queen Chapal, leading lady of Bengal's traditional, travelling folk theatre-in-the-round, the Jatra, spent his entire working life playing female roles. He feels, thinks and speaks like a woman. From his early boyhood, he felt, thought, spoke and behaved like a girl. Stepping into female roles came naturally to him. For a major part of his life, Chapal was forced to remain a cloistered gay person. His mother Prova Devi, a famous actress of the jatra and folk forms of theatre, introduced him to acting when he was just seven. But she died suddenly when Chapal was just ten, and his world collapsed.

"My brothers turned my sister Ketaki and me out. We shifted to a small room near Biswaroopa Theatre in northern Kolkata. In 1958, I joined Natto Company, a jatra group. They gave me a stage name, Chapal Rani. I began at a monthly salary of Rs.75, plus rupee one for food. But what I actually got in hand was Rs.72.50 which was not very bad in those days. My sister joined theatre and became a very famous actress." 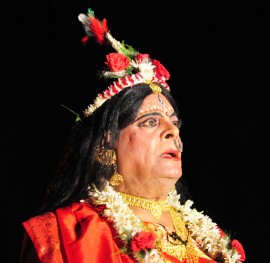 In the late 60s, women themselves began playing female roles. Male actors found themselves at the wrong end of the bread-butter problem.

Chapal found it extremely difficult to cope with his new name Chapal Rani "because it indicated that I was a woman. But that was the usual practice when females rarely stepped into theatre or jatra and male performers would enact female characters too. With time, I got used to it and I also realized that mentally and psychologically, I was more woman than man," he reminisces.

His theatrical connections got him a job with the railways but he quit after some years. "This is one of the biggest mistakes in my life. Had I not quit the job, I would not have suffered the financial penury my life has been reduced to," he says. His performances in Raja Debidas, Chand Bibi, Sultana Razia and Mahiyashi Kaikeyi were big hits. "In the 1960s, I was one of the highest paid 'actresses' of the jatra. I performed night after night in villages, districts and small towns of my home state, taking the audience by storm, till my pay packet swelled to around Rs.7000 to Rs.8000 per month. Young men would swoon through the window of the improvised green room to catch a glimpse of their favourite 'Chapal Rani.' Those were the days ..." he recalls wistfully.

In the late 60s, women themselves began playing female roles. Male actors found themselves at the wrong end of the bread-butter problem. "My problem was more than the rest because I was a cloistered gay. The jatra company showed me the door when the 'master' learnt I was gay. In the sixties, preference for the same sex was something no one even knew about. I was not surprised. No one understood me except my sister Ketaki, who is no more. She accepted me for what I was. The family, my neighbours and relatives still shun me," says this gentle, soft-spoken man.

He was forced to downgrade himself in ever smaller groups. Chapal found an opening with Kamala Opera. He was paid Rs.100 per show for a part in Durgesh Nandini, sometimes doing three shows in one day to make both ends meet. "But it was too late. Petromax lighting with 1000 volts was passé. They were replaced by modern, loud and dazzling lights that brought out the difference between the 'imitation' woman and the 'real' woman," he says. His happiest moment is when, in 1967, playing the lead in Michael Madhusudan Dutt's Janhavi, Uttam Kumar asked to see him after the performance. "I could not believe he was in the audience."

1995 marked a turning point in the life of Chapal Bhaduri, who is now closely identified with his monologue Maa Shitala in terms of performance and fame but not in terms of his financial status. Shitala worship was widespread as a religious antidote to smallpox in the 18th Century. Shitala continues to be worshipped for marriage by unmarried girls and for fertility by women who believe that they are infertile. "People who organise the Shitala show in different neighbourhoods told me that there is no play, no script, the way one is used to in jatra or amateur (urban) theatre. They said, 'we'll tell you the story of the goddess, and you can take it from there.' I understood that the details, the character, the fleshing out, the costume, the make-up and the dialogue I would have to create and structure all by myself."

He looked all over for the Shitala legend. He searched Battala, where jatra scripts and texts are sold, but he could find nothing. He began to put together pieces of scenes and dialogue from the jatras he had acted in. He was even kidnapped once by a gang of molesters who came in a jeep when he was crossing the dark empty fields from the make-up room to the jatra stage in a village. "They thought I was a girl. Men who thought I was a beautiful woman would give me admiring glances. I got used to it and learnt to take necessary precautions."

He began playing Shitala, the poor person's dreaded goddess of small pox and disease in 1995, in dramatised performances of the goddess' sacred saga for Rs.40, Rs.50 and Rs.60 per performance at different temple precincts in the city and also sometimes at the Ramakrishna Mission and Omkarnath Math. "Even my lover, a patron of my jatra performances, a married man with children, ditched me. Intense and ongoing struggle has been a part of my life. One struggle is the outer one . to earn a living, alone, forsaken and forgotten. The other is the inner struggle with my sexuality, my alternative preference that I needed to hide from everyone. It has been a lonely journey even after I came out with my secret. But it has been on my own terms," he sums up.