Hundreds of millions of desperately poor people were caught off-guard by the lockdown. As the government struggled to respond, it was up to citizens to recognise the humanity of each other and do what they could. Tanya Jairaj continues her lockdown diary.

Quite quickly after the abrupt Covid lockdown last year, it became apparent that the public would have to scramble to deal with its fallout. For the extreme poor, this simply was not an option, and their desperation forced them into a limited set of choices. Others tried to help, but it was soon clear that the problem was much larger than anyone had imagined. It was also equally clear that the government had very little capacity to help.

After a few weeks of scrambling to organise and distribute assistance (see Part I of this diary) it became clear that a few volunteers alone could not sustain this; we would need to connect with local community and political leaders. With their assistance, we conducted surveys in areas with vulnerable populations, devised and deployed a system of tokens for each household, created crowd management systems, and made social distancing arrangements. These measures helped our distribution become more efficient and dignified. The only condition I laid down during the surveys was - for anyone to receive rations, they only had to express a need for it. There would be no exclusion.

The surveys included data on each vulnerable household, street-wise, in a neighbourhood - the name of the household representative (usually female), her phone number, the number of people in the home, whether they had ration cards, etc. Each household received a token and the token number was recorded by us. At the distribution site, after cross-checking their tokens against our survey data, people were allowed on to the site. We ensured that every person wore a mask (which we distributed several thousands of), and that they maintained adequate social distance while they waited for their turn to be served. Since the sun was unrelenting, we made arrangements for drinking water for the waiting crowds. 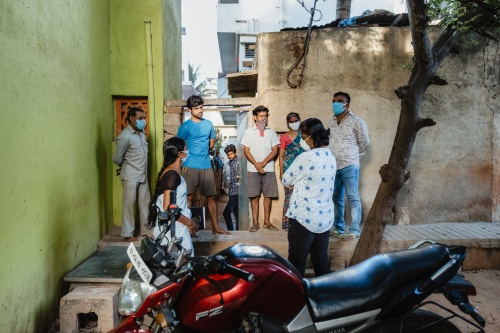 Depending on the number of people we were to serve (based on tokens issued), we were at a location for 1-2 days. Locations varied from empty lake beds, abandoned old dump-yards, open spaces next to construction sites, staircases of kindergarten schools, school playgrounds, large gated communities with several houses under construction, and local streets.

Making individual household ration packages was expensive, and that money could be better utilised in procuring rations. So, we asked the people who received tokens to bring 3-4 sturdy bags with them to the distribution, and we used different sized mugs to measure out rations into them. Our rough formula was - 5 kgs of rice, 2 kgs of dal, 1 kg of sugar, 1 litre of oil, 500 grams of salt and 200 grams each of chilli and turmeric powder per household (with an average of 5 people). With each extra member in the household over 5, the quantities went up proportionately. The idea was to provide enough basic food supplies to last the household five days.

One principle that we employed early was to engage the community in this entire process – from the surveys, data documentation, token distribution, site preparation, crowd management and actual distribution – it was all done by volunteers from within each community we distributed in. These volunteers came to serve organically. They were out of work construction labour, household staff, daily wagers, metro workers, electricians, plumbers, tender-coconut vendors, vegetable sellers, auto drivers, students, etc., and themselves needy recipients of these rations.

In fact, several who received rations on the first day of a distribution came back to volunteer the next day. On speaking with them, they said that volunteering with us gave them a purpose, dignity and some meaning in the face of the scary and helpless situation they were facing. As Ranga, a tender-coconut vendor who volunteered with us during a distribution in Kodigehalli shared, "I’ve never worked so hard or had so much pride in what I’ve done in my entire life." 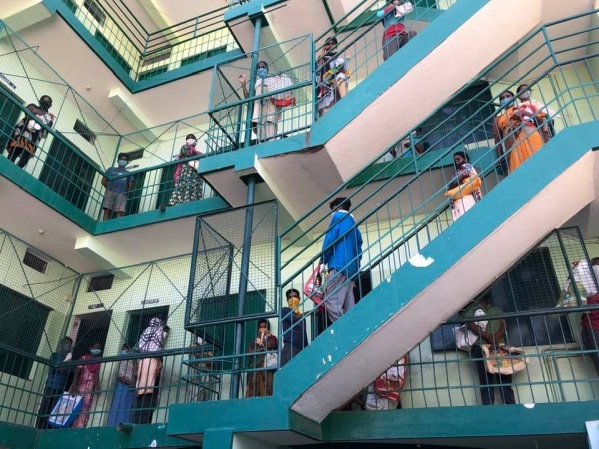 Picture: Distribution points weren't always available in all localities; in some cases school buildings were used.

Did we only serve those who had received tokens? While that would have been the easy thing to do, and after trying it once, I decided that just because our survey system had failed to include them, I could not ignore those who needed help. So, as a rule, we always carried double or triple the estimates based on the token count, and served people as long as there were either people to serve or I ran out of supplies.

For fairness and order, we served the ones with tokens first, and then organised and served the remaining people who often equaled or exceeded the number of people with tokens. This practice came with several attendant dangers. For example, at venues that had gates, I saw literal stampedes when we opened these gates to allow the token-less people in, most of whom had waited for many hours with obstinate hope in the uncertain kindness of strangers.

They had little choice. They had lived all their lives by a juggle from one wage cycle to the next, forever stretching their meagre earnings just enough to meet their needs for food and shelter but never to escape their poverty. But the lockdown had devastated even that life. For millions of people, there was simply no next wage to look forward to. As Lingamma, a 70 year-old migrant worker from Raichur I met in Hebbal said, "I am not afraid of the virus. I'm afraid of the hunger my family is facing."

Demand for rations kept rising, so the net for financial contributions had to be cast wide. My beloved aunt, Meera, started a phenomenal crowd-funding campaign which raised lakhs of rupees globally – mostly from people with roots in Bangalore. My incredible life-partner, Shivram, apart from enabling me emotionally to venture bravely into this exercise, also reached deep into his networks and raised considerable money. My close friend Lourd, an organ transplant survivor, stepped in with his Spreading Hope Foundation to receive and disburse contributions in an accountable manner. Between all of them, I found great support for one of the most difficult pieces in this puzzle, and I am forever in awe of their unstinting support.

Picture: Hundreds of token-less people pushing up against the gate at the distribution site for hours while they waited for those with tokens to be served - there was a stampede when the gate opened, but everyone was served.

Several organisations who were conducting relief work at the time were facing severe challenges raising money – first, because this was a disaster of unprecedented proportions which affected the entire country instead of a limited geography. Second, profits of corporates were dropping therefore affecting philanthropic contributions. Third, the newly set up PM Cares fund had cannibalised whatever little money was available. Despite this, friends, family and strangers – all astonished and humbled me with their enormous generosity.

Added to this was a fortuitous partnership with the NGO, Goonj, which supplemented our food supplies with close to twenty tonnes of provisions. In all, we distributed around 85 tonnes of food supplies and 5000 meals of cooked food to over 75,000 people. Once migrants started returning home, we supported hundreds with the means to afford transport back home, ensured they had food for the journey and personal safety products.

A lot of this, I'm sure, is similar to how in cities across India, people came together to help a huge tide of desperate people, both migrants as well as locals. Many moral traditions teach us that compassion is a verb; these people were living proof. We must be thankful for their public spirit and kindness, especially because there is another side to this, one that is so virulent that even a pandemic did not dislodge it.

Tanja Jairaj is a lawyer by training and a development sector professional by vocation.

Series : This article is part of a series of reflections by the author on the Covid lockdown of 2020.

Pandemic diary : The best and the worst
06 May 2021
0 Comments + ADD
RECENT ARTICLES