Bullet holes in the regulations

The government ignored many chances to protect people's lvelihoods in an ecologically sensitive area. But a hail of police firing on protestors forces a rethink. Kanchi Kohli reports.
06 March 2011 -

Does it take deaths and injuries for the corridors to power to sit up and take notice? On 28 February, when the people of Kakrapalli village, Santha Bomalli Mandal in Srikakulam district of Andhra Pradesh protested against the construction a thermal power plant in their area, they faced police aggression, leading to these casualties. A day later, the Ministry of Environment and Forests (MoEF) issued a parliamentary statement and an order asking East Coast Energy Private Ltd (ECEPL) to suspend work on the 2640 MW Bhavanapadu Thermal Power Project.

Back in 2007, the Deputy Director, Fisheries had written to the District Collector, Srikakulam pointing out that there are 539 fishermen families in the area, who are part of the Inland Fishermen Cooperative Society and who draw their livelihoods from fishing in the swamp and allied activities. They would be impacted if the Bhavanapadu plant was set up and therefore alternative livelihoods for them need to be looked into. This did not happen, although the impact assessment-related procedures appraised within the MoEF mandate such things.

As per MoEF's rethink now, the fate of the power plant is set to roll back to the decks of a committee within the ministry. This Expert Appraisal Committee (EAC) to review the project will meet on 7 March.

A history of violations

But there's nothing new in all this. If we're going over this ground now, it is because when the ministry first examined the project, its basic social, livelihood and environmental impacts were put aside. But, as in so many other cases, here too the ministry's past errors are coming back to remind it of its role as the guardian of the natual environment.

There have been concerns with respect to the setting up of the plant, ever since the time the project was being appraised by the MoEF. In fact the EAC had received submissions from several people including the representatives of the Inland Fishermen Cooperative Society, when they were considering the environment clearance to the plant back in 2008. 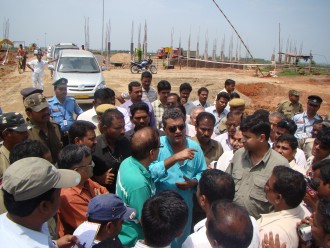 What is ironic is that the local protests, false data and scientific justifications of the conditional bailout didn't turn any heads in the ministry, but the police firing promptly got a response. (Above: Plenty of grievances were recorded during the NEAA's site visit to the project location in June last year - Picture by G Srinivas).

These submissions had highlighted the fact that the local farmers had been upset with ECEPL because the company had has constructed an unauthorized bund flooding the adjacent lands. The displeasure with the company had continued because the fishermen had been deprived of their age-old traditional right to fish, with the plant coming up in the area critical for them to carry out fishing.

The EAC not only swept these concerns away, but also overlooked the ecological importance of the wetland area (which it acknowledged itself), and sought to give its go-ahead for the construction of the plant based on a very poor impact assessment. This site is located just 5 kms from Telineelapuram pelicanry, a globally recognised area for avifauna. But, even prior to all the approvals being in place, the company had begun draining water from the nearby Naupada swamps and initiated excavation work. This is what the fishing communities had brought to the attention of the experts prior to the approval being granted (See: this link and this one.)

The project was also looked at closely by the National Board for Wild Life (NBWL), but only after the construction work had already, and significant ecological damage had already occured and the local community had been angered due to the illegal construction and its impacts as mentioned above. The report from NBWL provided a scathing critique of the Environment Impact Assessment (EIA) report based on which ECEPL got its environment clearance by the EAC. The report also remarked at all the damage that had been caused to the area by the draining of the wetlands.

Still, NBWL appeared to let the company off the hook. Despite reprimanding the company, NBWL also proposed a bail-out package which listed a host of mitigation measures and conditions, which treated the project as irreversible considering it had already received received environmental clearance.

The environment clearance for the project was challenged by the local fishermen before the National Environment Appellate Authority (NEAA). During a site visit by the NEAAs representatives J C Kala to the area in June 2010, the local communities had vehemently opposed the setting up of plant, and brought to light the violations already incurred. However, the NEAA in its final order sought to balance development with conservation and relied on the submissions of the reputed scientists that all efforts must be made to contain the impact on ecology and local people benefit from the fruits of development. For this another set of conditions and mitigation measures were listed for the company to follow.

What is ironic is that the local protests, false data and scientific justifications of the conditional bailout didn't turn any heads in the ministry, which genially nursed the project along at each stage. What did awaken the ministry to the sinking ground beneath its feet in this wetland area is the police firing at Kakrapalli - which promptly got the Minister, Jairam Ramesh, to turn back to re-examine all the consequence of the bad decisions made so far. There are currently over 7000 such projects; if each one will only receive proper attention under the glare of police firing, that would add up to a lot of lives lost or destroyed.

The Kakrapalli decision eerily resembles an incident that took place in the nearby Sompeta Mandal of Srikakulam district in July 2010. There, fishermen were opposited to the construction of a 2x660 MW super critical coal-based thermal power plant by Nagarjuna Construction Company, which too had been granted environment clearance by the MoEF. This project had also been challenged by the fisherfolk before the NEAA, who had collectively shown their their opposition during the site inspection in June 2010. On 14 July 2010, four people lost their life in police firing while they were protesting against the construction of. It was only after this incident that the NEAA and the MoEF stepped in to revoke clearances, and begin re-examing the facts.

Both these incidents represent occasions where the decision-making process chose to ignore many of the social, livelihood and ecological considerations that should have mattered. Many reputed experts, consultants, and scientists disregarded not just the fishing communities' word, but even their own understanding of the irreversible impact that the project would have on the people and ecology of area in question.

Such manoeuvred injustice often goes unpunished. But every once in a while, a Kakrapalli or a Sompeta blows itself up in our faces, seeking answers from all those responsible in small and significant ways. How we respond matters not only here, but equally in the countless other places around the country that are experiencing similar turmoil.

TIGER SANCTUARY : Are tigers back at the Buxa reserve?
MORE ARTICLES
on similar topics ...
ANDHRA PRADESH