Severe shortages of power and water are predicted for the coming months in much of the North. Himanshu Thakkar looks beyond the 'natural phenomena' that are blamed.
01 October 2004 -

As screaming headlines have been warning us, during the next few months, water and power shortages in northern India are going to be quite bad. The newspapers tell us that this is due to low water storage in the Bhakra-Beas system managed by the Bhakra Beas Management Board (BBMB). We are further told that this is due to natural phenomena; low rainfall in the catchment areas of the dams is to blame for the predicted shortage. But there is much more to the story: over-dependence on Bhakra Beas dams, a steep decline of groundwater levels, destruction of local water systems, rising demand for water and power, and the BBMB itself.

How the reservoir at Bhakra Dam has been depleted dramatically this year is revealed by looking on the same dates at different times during the last two years (see graph above). It is clear from the chart that though the year at Bhakra began with the water level higher than on the corresponding date last year, by April 15, the water level in 2004 was already lower than on the same date last year. The gap thereafter kept increasing. This clearly shows that during the first four months of 2004, for some reason the level of water in Bhakra was allowed to go down much lower than it should have been. By Sept 13, 2004, the gap had grown to over 71 feet, setting off alarm bells.

Why are these levels so important? For one, northern India relies hugely on these dams. The irrigation and hydropower generation of the north - particularly Punjab, Haryana and Rajasthan - is significantly dependent on them. A substantial portion of the drinking water requirements of northern India, including Delhi, comes from the Bhakra system. It is fair to ask, therefore: if these dams are so important to a vast region, why were water levels in these dams allowed to drop so low? And just as importantly, why did the level go so far down from the high water levels that we began the year with in both Bhakra and Pong reservoirs?

For a likely answer, let us look at the power generated at Bhakra's 1250 MW (installed capacity) hydropower station during January-April 2004, and compare this with the figures from the previous year. What is clear from this table is that power generation at Bhakra was higher in 2004 during all the first four months of the year. Simultaneously, as we saw earlier, the water level in the dam dropped steeply, to fall even below the 2003 level, despite having begun the year on a better note.

Now let us look at what was happening at another big dam of the Bhakra Beas system, the Pong dam. The lowest level at the Pong dam was reached on July 3, 2004, at 1275.12 feet; this is (as noted earlier) the lowest level it has reached in sixteen years. Moreover, this is despite the fact that in the beginning of 2004, the Pong dam level was at 1,341.13 ft, even higher than its level a year earlier on January 02, 2003, at 1316.62 feet. Why did this happen? As before, the power generation figures from the two years tell a story. In this case, it's even more dramatic; during January to April 2004, power generated at this dam was more than twice the amount generated during the same period last year. 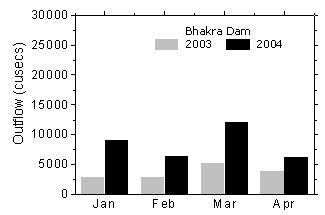 Water levels in the dams are affected by two quantities: inflow and outflow. The inflows during January and February 2004 into both the Bhakra and Pong reservoirs were higher than during the same months last year. However, during March and April 2004, inflows were lower than in the preceding year, and it is this 'natural phenomenon' that officials blame for the seriously reduced water levels now. But any variability in inflow into this natural system can be managed, at least in the short term, by regulating the outflow. But rather than reduce the outflow to conserve water during a period of natural decline in inflow, BBMB officials opened the taps dramatically (see graph to the right).

The impact of decisions made during the first few months of this year - to greatly increase the outflow from these dams, and to generate significantly more electricity than last year - is being felt now. The water level at the Bhakra dam is at its lowest for many years, inspite of the fact that BBMB frantically reversed course in June, July and August 2004, releasing the smallest amounts in a decade. It is true that rainfall in Bhakra-Pong catchment has been below normal this monsoon season. But had the water level in Bhakra and Pong not been allowed to go down so much during the first four months of this year, the water level today could have been much higher.

Why were the outflows from these reservoirs so high during the early months of this year? And how did those releases continue to the point that we now face and impending crisis? The answer may lie in what happened between April 2004 and now - the elections!

The India Shining and Bharat Uday campaigns earlier in the year were specifically designed to provide a false sense of widely-shared prosperity, and hundreds of crores of taxpayer funds were spent on an overtly political campaign. In that scenario, state-controlled assets are an even more tempting asset; the BBMB and the Power Ministry (the BBMB's parental organisation) were perhaps only too willing to provide a boost in power and water in the run-up to the elections, even if doing so put those resources at risk later. Transparency and accountability are generally weak at the agencies responsible for projects such that these. They are supposed to operate in the public interest and not in response to political considerations, but the typical state of operations - where things happen without scientific explanation or consideration - makes this virtually impossible.

Given our over-dependence on such large projects, to the exclusion and almost destruction of all other options, it is enormously vital that BBMB and other water management bodies function well. Their secrecy, or supplication to political objectives, might temporarily win them points with their political masters, but such actions would be plainly not in the nation's interest, not to forget unlawful as well.

Himanshu Thakkar is with the South Asia Network on Dams, Rivers, and People.