Of daughter, father and river

Samir Chanda's Ek Nodir Galpo, which premiered in Kolkata in November 2007, offers the moving experience of a father who makes it his mission to name a river after his dead daughter. His struggle evolves into his way of reinventing his daughter. Shoma Chatterji has more.
14 January 2008 -

Rarely does one watch a fiction film that moves you so much that you carry it with you outside the theatre long after it has ended. Samir Chandas Ek Nodir Galpo, based on Sunil Gangopadhyays book Ekti Nodir Naam (The Name of a River), offers this moving experience. The film presents the ideology of single-minded, dedicated commitment one does not come across in these days where the very term ideology, that may roughly be termed human values integral to life is either completely absent or has radically changed in meaning and significance. It is a state of mind far removed from a world riddled with materialistic consumerism, globalisation, the information technology revolution, terrorism, Nandigram, Rizwanur, Tasleema Nasreen and the rest. Ek Nodir Galpo was premiered at the 13th Kolkata Film Festival in November 2007. It was also screened at the IFFI in Goa. (The DVD versions are not available yet because the film will be publicly released only in February or March.)

Mithun Chakrabarty and Shweta Prasad as father and daughter in Ek Nodir Galpo.

Darakeshwar (Mithun Chakrabarty) is the postmaster in a small post office of a village in West Bengal. He lives with his motherless daughter Anjana in his ramshackle home where life is one endless circle of naïve childish pranks and father-daughter games of emotional hide-and-seek. The girl grows up to be an attractive young adolescent (Shweta Prasad), and to her fathers delight, she becomes the first girl in the village to graduate from school and join a college in the city. Darakeshwar waits at the bus-stand every day to escort his daughter home after the sun has set. One dusky evening, Anjana fails to return.

When Darakeshwar learns about the brutal gang-rape and murder of his daughter, his first reaction is of total disbelief. How can this happen to me? is his immediate response. Then, when he actually sees the girls body being fished out of the Keleghai river, he is reduced to a bundle of shock, grief and disbelief. Despite the objections by village elders, he gives Anjana a river burial.

From this point on, his life changes completely. Leaving behind his simple existence in his small world, Darakeshwar decides on a near-impossible mission  he wants to change the name of the river to Anjana, after his dead daughter as a tribute to her memory. Darakeshwar is reminded of the past when Anjana jokingly told her father that the name Keleghai is ugly though she loved the river dearly. It is the dead girls love for the river and her expressed dislike for the name that pushes Darakeshwar towards his strange mission. The fact that she was gang-raped by a bunch of goons, killed and then thrown into the river does not bother him. He does not file an FIR, nor does he cooperate in the investigation by the local young police officer. Darakeshwar is not concerned even when the culprits are caught and taken to the police station.

Shot almost totally on location in Burdwan District at a place call Naliapur, on the banks of the Bhagirathi river, the film vests the river with a life of its own, much like the life of its protagonist Darakeshwar.

Over time however, this struggle to rename the river evolves into his way of reinventing his daughter. When he talks to the dead Anjana on the riverbanks, he is actually talking to the river itself, because somewhere along the way, the living and throbbing river has merged completely with his dead daughter Anjana. It is as if, for Darakeshwar, the river is Anjana. It is his way of immortalizing the memory of his daughter. The human race is mortal. But a river is timeless, free and immortal.

He stops going to the post office, shaving or having a haircut, wearing clean clothes or taking a bath. He wanders from one government office to another, appealing for the change in name. When one of them tells him to go on a signature campaign, he does just that, oblivious to street urchins pelting him with stones. When they tell him to raise slogans and canvas his mission everywhere, he boards buses and speaks at market squares, ignorant of the curious stares of bystanders and passers-by. At the end of a weary day, he returns to the bank of the river to talk to his dead daughter, and to himself, determined to see his mission to its end.

From a simple story of a motherless daughter and her doting father, peppered with childish pranks at first and then soothed by an adolescents motherly care, Ek Nodir Galpo changes course midstream. It goes on to tell more the story of a strange mission that raises questions about the futility of aspirations, ideology, material affluence in the face of a mans unique mission rather than remain the tragedy of a father who has lost his only emotional crutch. It is a strange polarisation of one man against the entire social, economic and legal system. The difference can never be bridged because there is no common ground of understanding between the two.

Darakeshwar finally meets an empathetic soul in the district magistrate, who, however, cannot help him legally or professionally. Who has ever heard of getting the name of a river changed because of one mans ardent desire? There is no rule in any book of law or in the statutes that tells how to, when or why. The intrigued and sympathetic district magistrate sets sail in the middle of the night on a boat on Keleghai River to try and help him. He finds Darakeshwar digging a hole on the banks of the river to plant a pole with the name of the river Anjana flagged to the top. Hand me the spade please, says the DM to this crazy man. I will not, says a desperate Darakeshwar, I know you will not let me plant this flag. No, says the DM, I will dig and you will plant the pole, and sets about his task of helping this man in his mission.

The film suggests that behind the steely exterior of officialdom, somewhere, Darakeshwar tugs at the heartstrings of the DM as a human being, if not the DM as a representative of an unfeeling and indifferent bureaucracy. It is also the directors way of pointing out that not everyone that represents the bureaucracy is as bad and as corrupt as we know him or her to be. There is perhaps a humane mind ticking away behind every ruthless official face. Perhaps it needs a man like Darakeshwar to bring it out in the open. 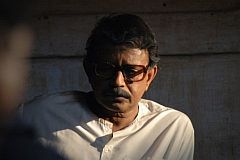 Shot almost totally on location in Burdwan District at a place call Naliapur, on the banks of the Bhagirathi river, the film vests the river with a life of its own, much like the life of its protagonist Darakeshwar. His life rises and falls like the ebbs and tides of the river that for him metamorphoses to become his dead daughter at the end of the day. It is the river his daughter loved so dearly. It is the river where her rapists dumped her body. It is the river in which he floated the body of his beloved daughter. With his new goal of renaming this river, he finds another reason to live, and die, for.

Mithun Chakrabarty as Darakeshwar gives you a reason to watch Ek Nodir Galpo again and again. Within the brief time-span of the films story, you watch him grow from a young father to a man who ages much beyond his years; you are mesmerised with the way he brings alive a father crazed with a mission no one has ever heard of. He changes his voice, his gait, his body language and his facial expression as he grows along with the film. It is perhaps his career-best till date. Shweta Prasad as the adolescent Anjana who keeps haunting his present through flashbacks complements his performance beautifully. Krishnakishore Mukherjee as the DM, Anjan Srivastava as his ingratiating secretary, Nirmal Kumar as a village elder and Jishu Sengupta as the police officer offer complementary support.

Rajen Kotharis cinematography captures for posterity the beauty of the riverside at all times of day and night, as brilliantly as it does the ragged indifference of the market square, the drab and dry interiors of government and municipal offices and state bus services. Nachiketas melodious musical score offers a lyricism in keeping with the flow of the river, taking it in all its moods  happiness, anger, grief, sorrow, desperation, violence, peace and patience. He reinvents a couple of old folk numbers to fit into the rustic ambience of the village.

Sanjib Duttas editing and Anup Mukherjees sound design add to the texture of the film. Add to this the screenplay, dialogue, direction and production design by Samir Chanda and you have one of the finest films gracing the Indian screen in recent times. Unlike films that have drawn inspiration from a literary source where comparisons are obvious, this film stands apart. It does not matter whether you have read the story or not. It does not matter whether the film has remained faithful to its literary source or not. It is a human and humane cinematic documentation wherein aesthetics and story are seamlessly interwoven to create harmony and trigger introspection at the same time. Ek Nodir Galpo challenges critics attempts to be judgmental about fidelity to the original literary source without moving away from its fundamental narrative, thematic and aesthetic features.

TIGER SANCTUARY : Are tigers back at the Buxa reserve?
MORE ARTICLES
on similar topics ...
REVIEWS