Gold mining wreaks havoc on the environment and humans alike, but some precautionary measures and fair practices can help minimize the damage. Mahazareen Dastur concludes this two-part series.
12 June 2010 -

Mining for gold alters landscapes irrevocably, so much so that the land becomes unfit for any other use thereafter. Where does this lead us to? Do we not mine for gold at all?

That seems a bit unthinkable. After all, gold constitutes an emotional purchase for Indians  a must-have factor and an almost-instinctive craving to build and nurture the family nest egg. Some may even argue that there is always a price to be paid for any kind of development and gold mining is only one in a basket of such activities. Besides, the business case is much too strong with probable expectations of $1 billion over the life of a mine and profits of $200 to $300 million (i.e. returns of 25-30 percent). 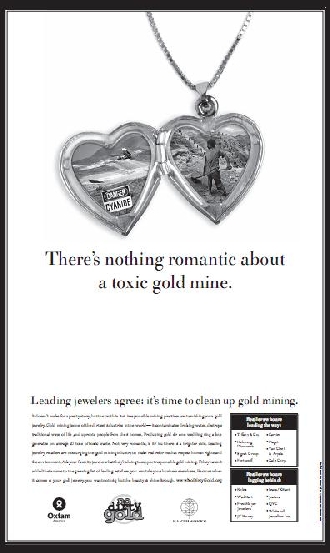 This New York Times advertisement from 2006 features a heart-shaped locket with images depicting the environmental and social impacts of gold mining. The advertisement names both the retail jewelry "leaders" that have made in-principle commitments to sourcing more responsibly produced gold and those "laggard" companies that have not yet done so. Source: www.nodirtygold.org

This is where environmental and social concerns suffer a setback  an obscenely gross one. Lax environmental regulations, poor implementation of short-sighted laws, toothless environmental protection agencies, and legal loopholes in developing countries (especially India) make up a sure-shot recipe for disaster.

For example, guidelines for arsenic in drinking water must at least match those of the World Health Organization (i.e. in no case should arsenic levels exceed 0.01 mg/L). Currently, the Central Pollution Control Board of India does not even list arsenic in its list of water quality criteria. The next best available indicator for these standards in the country  the Bureau of Indian Standards (IS: 10500)  lists a limit of 0.05 mg/L, five times more than the WHO limits.

Indias tryst with the Environment Impact Assessment (EIA) Notification (2009) and its meaningful implementation portend many a disaster if we dont seriously rethink the way we do business. Intended as an environmental clearance procedure where projects will be assessed for clearance depending on their potential for environmental harm, it is not an exaggeration to say that the process is esoteric and arbitrary.

The clearance process begins with the compilation of an Environmental Impact Assessment Report by the project authority (i.e. the company wishing to launch the project) with the aid of 'EIA consultants', followed by public hearings which are typically hotly contested by the communities affected by the project (but to little avail). These are accompanied by a series of dispatches from the state departments and eventually, and most often, a 'clearance letter' is issued by the Ministry of Environment and Forests (MoEF).

The environmental clearance is granted based solely on the reliance on data about environmental impact from the project proponent. The clearance includes an accompanying set of conditions that have to be complied with and monitored by the Regional Offices of the MoEF and sometimes the State Pollution Control Boards and other State Departments.

In a recent report Calling the Bluff - Revealing the State of Monitoring and Compliance of Environmental Clearance Conditions by Kanchi Kohli and Manju Menon of Kalpavriksh, the authors qualify their analysis of environmental compliance in the country with some scary facts. According to them, the compliance and monitoring reports are not based on actual site verification; the project authorities do not always report non-compliance in their reports; regional offices often draft their monitoring reports to mimic the compliance reports that project authorities file; and not all projects are monitored and monitoring is done on priority due to inadequate field staff in regional offices.

It would appear that the MoEF has relinquished its responsibility. In fact, its officials admitted as much in one RTI response to having no database on the extent of compliance of the 6000-odd projects it has cleared. With such a state of affairs, it is not hard to understand why environmental abuse is so rampant. Important questions related to mine closure  the lifespan of a mine could last for 15-20 years  would also remain unacknowledged and unanswered.

Socially too, the benefits of mining must reach the communities it affects on ground zero. It must be recognized and acknowledged that such projects are bound to unalterably change the lives of these people. Their resettlement and rehabilitation must transcend mere lip-service.

In fact, the government mandating a minimum percentage of the mining companys annual (not a one-time allotment) revenues towards community development (over and above a budget for minimization of environmental issues arising from the project) would be a good first step.

One avenue for social empowerment of artisanal gold miners is ethically sourced jewelry. Also termed as fair trade jewelry, this practice has been slowly making inroads in the United States. Since 2004, the No Dirty Gold Campaign, the brainchild of the environmental group Earthworks, has been busy obtaining pledges from top jewelry retail firms from around the world on responsible sourcing throughout their supply chains for gold used in their products.

More than 60 jewelry companies representing USD 14.5 billion in sales, including Sears and Tiffany & Co., have committed to purchase cleaner sources of gold by endorsing the Golden Rules, a set of principles for more responsible mining. These companies are calling on the gold mining industry to move away from current practices that harm local communities and generate millions of tons of toxic waste.

While such initiatives (and responses to them) may appear pre-nascent in India, the fact that they target entire supply chains gives hope that the industry will be driven to adopt environmentally cleaner and socially responsible practices in the not too distant future.

Research and development into cleaner methods of extraction is also a must. Not that these technologies do not exist; they do, but they also require some fine-tuning to adapt them to the conditions of the project site. For example, bioleaching is being increasingly used for the treatment of refractory (generally defined as ore containing gold which cannot be satisfactorily recovered by conventional methods) gold deposits by various mining companies throughout the world. Here, extraction of gold is facilitated by the metabolism of certain microbes and can significantly reduce the extent of pollution caused by conventional extraction methods.

Learning from the past

As far as gold mining is concerned, we have an opportunity to learn from the mistakes committed by certain developed countries in their own backyard. We have a whole series of examples of where things have gone wrong (and where they are still going wrong) from other developing countries. We need to use these insights to our advantage, and quickly.

This is part of a series of two articles on gold mining and India. Mahazareen Dastur has been associated with the environmental field for a decade and is based in Mumbai.