Sitaram Patidar fights on for the land which means everything to him, now lost to the Narmada dam. At the ripe age of seventy, the end of this road of struggle is still not within reach. Neeta Deshpande reports.
05 January 2010 -

When Sitaram Patidar, a farmer from the fertile plains of Nimad in Madhya Pradesh is asked about the market price of the nine and a half acres which he will lose to the Sardar Sarovar dam, his big, expressive face softens. "How can I quote a price", he asks, "for the land which has supported many generations of my family? Only in times of extreme hardship do farmers consider selling their land and settle on a price. And farmers like me who have laboured their entire lives for the land they own, won't be able to put a price tag on it. At least not until life demands it of us."

At the age of 11, when Sitaram moved to Kadmal village with his family after his grandfather's property was partitioned in the early fifties, his father became the owner of fifteen acres of unirrigated land. At that young age, Sitaram had begun to help with the agricultural work - grazing and feeding livestock. His family was poor, he had three brothers and two sisters, their house was small, and their landholding not enough to get by. So the family began to farm as tenants on other people's fields.

During his teenage years, Sitaram would readily offer his labour for free to moneyed people in the village who needed help on their farms, and at times, to unload construction material to build their houses. In return, he'd only get a cup of tea. But in the process, he also earned their trust. When it came time to expand his own family's landholding, Sitaram approached the same moneylenders who by now believed he was an honest man and wouldn't default on interest payments. He borrowed money at a usurious rate of 24 per cent, and thus began his efforts to buy small pieces of land to expand his family's landholding.

By the time Sitaram turned 18, his father had handed over the entire responsibility of managing the agriculture as well as the household to him. In coming years, while he bought more land, Sitaram also married off his three brothers and two sisters. Of the money that the four brothers earned from their fields, they would pay off the interest they owed, then borrow still more money to buy more land.

Slowly, they started irrigating the lands they bought by installing a pipeline to draw water from the Narmada. The brothers bought seven pieces of land to add to their original landholding in the years which followed, so that when they partitioned their property in the early nineties, each of them had land of about the size that their father owned when they moved to Kadmal. The partition entailed more expenditure to construct and improve Sitaram's share of the house, the annual rate of interest continued to be 24 per cent, and there were times when a drought resulted in complete crop failure. Add to that the expenses for the weddings of his four daughters, and his loans seemed to be unmanageable.

But he took refuge in the fact that he had an entire life ahead of him to work hard and repay them. Above all, he had a priceless asset - his very own land that he had toiled to buy, improve and irrigate. Why then did he need to be anxious that he wouldn't be able to repay his loans, especially with his record of never having defaulted on an interest payment?

While Sitaram increased his family's landholding by bits and pieces, little did he know that Prime Minister Jawaharlal Nehru had laid the foundation stone for a 50-metre-high dam over the Narmada at Gora in Gujarat in 1961, an event that would cloud over the entire course of his future. This dam was a precursor to the colossal Sardar Sarovar Project (SSP), designed to control the waters of the river which was to irrigate his new fields.

Eight years later in 1969, while his family rejoiced in the birth of his son, the Central Government constituted the Narmada Water Disputes Tribunal to resolve the dispute between Gujarat, Madhya Pradesh and Maharashtra over the sharing of the costs and benefits of the SSP. The tribunal declared its Award a decade later, setting the height of the proposed dam at 455 feet: a height at which the waters of the Narmada would drown the very fields that Sitaram was buying by the dint of his hard work.

The spontaneous agitation which broke out after the declaration of the Award - the Nimad Bachao Andolan - brought to his notice this tragedy looming over his future. From then on, he dedicated himself to a life of protest, to save the precious land that he had struggled so hard to make his own.

When Sitaram first heard of Medha Patkar, he had serious misgivings about the capacities of a woman to win his rights to rehabilitation from the gargantuan establishment behind the dam. But when he heard her speak at sparsely attended local meetings, he began to realize that she demonstrated a rare maturity. Following the lead of a few people in his region whom he respected, he plunged into the struggle which would go on to become one of the most significant movements for social justice in modern Indian history: the Narmada Bachao Andolan (NBA).

He mobilised support, attended meetings, participated in rallies and courted arrest. He even undertook fasts - the longest lasting twenty-two days in Bhopal in 1994 - to put pressure on the Government to rehabilitate the people of the Narmada Valley adequately, failing which, he demanded, they stop the dam. 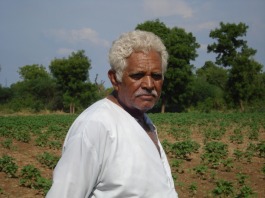 While Sitaram increased his family's landholding by bits and pieces, little did he know that Prime Minister Jawaharlal Nehru had laid the foundation stone for a 50-metre-high dam over the Narmada at Gora in Gujarat in 1961.

From the Andolan, he learnt the language of humanity, he explains perceptively. He also learnt a lesson upon which he based his life of struggle: Satta se sangathan bada hota hai. (A united people are more powerful than the State.) Though women were confined to the four walls of the house in Nimad, Sitaram encouraged his wife and daughters to support the NBA by attending meetings and participating in rallies. Above all, he concludes, he gathered strength from the movement: the requisite resource which catalyzed him into action.

To this day, however, his committed activism has not yielded the results he had so fervently hoped for. The Madhya Pradesh Government has not fulfilled its obligation to compensate Sitaram with land, as stipulated by the Narmada Water Disputes Tribunal Award. Instead, the Government is disbursing illegal cash compensation to the displaced families in Nimad, a process fraught with corruption and discrepancies that has been widely criticised on several grounds. However, the lack of initiative on the Government's part to recognize that Sitaram's land will also be submerged along with others in his village, remains a source of mystery to him.

Though the Government has included him among those losing their houses to the submergence, his name is not in the records as far as loss of land is concerned. Is this because he participated in the Andolan and refused cash compensation, he wonders. Sitaram stands to lose part of his land to the submergence, while his remaining land will be surrounded by water on three sides, and will become inaccessible for the purpose of agriculture. These five and a half acres will be surrounded by the waters of the Narmada and the backwaters of the dam. Is this land not in the Government records because it has ignored the impact of the backwater effect in its surveys? After fighting for his rights relentlessly for almost twenty years, answers still elude Sitaram.

And what of sacrificing in the name of national interest? Sitaram, who is known in his village as a raconteur, chooses to reply with a story. After a short pause, he begins.

"When a young man in a village passed away, leaving behind his little children, his widow began to cry uncontrollably. Her relatives and neighbours tried to console her, but to no avail: she would not stop crying. Around this time, a learned man in the village who read the Bhagwat found out about this woman's predicament. Deciding to calm her down, the learned man whom everyone called Maharajji, approached the widow. 'The body can die and be destroyed at any time', said Maharajji, 'but the soul is immortal. If you continue to cry in this manner, who will take care of your children? So stop crying now. You have a life ahead of you.'

"Now it so happened that one day, Maharajji's buffalo's calf died. So his buffalo wouldn't yield milk. His children then pestered him for milk which he couldn't provide. So he sat on the stone platform outside his house, and began to cry. The widow happened to pass by. The first thought which crossed her mind was that Maharajji must be facing an enormous crisis. Otherwise, why would a man who didn't let her cry when her husband passed away, be crying himself? Surely, his loss must be far greater than her own.

"The woman asked Maharajji what the matter was, and he in turn told her about the death of his buffalo's calf. The woman was astounded. 'You didn't let me cry when my husband passed away', she complained, 'and now you are crying for a mere calf?' That's when Maharajji replied to her.

"'That husband was yours,' he said. 'This buffalo's calf is mine. Apne ke liye duniya roti hai.'"

And so Sitaram Patidar grieves and fights on for the land which means everything to him. At the ripe age of seventy, the end of this road of struggle that he's been forced to embark on is still not within reach.