The situation that Maheshwar Project is in, brings sharply into focus the issue of accountability of those responsible for the decisions that impact millions of people, involve thousands of crores of rupees and vast natural resources. Shripad Dharmadhikary hopes that Maheshwar would also offer a chance to demonstrate how those liable for the mess can be held accountable.
31 December 2015 -

The Maheshwar Hydropower Project on the Narmada river is one of the 30 large dams that are a part of the ambitious Narmada Valley Development Project. Since the late 1990s, the project has been facing an intense challenge from the affected people, who have been fighting under the banner of the Narmada Bachao Andolan.

On 28 October 2015, the National Green Tribunal (NGT), in a brief order reiterated its earlier directions to the 400 MW Maheshwar project not to lower or close its dam gates and not to cause any submergence without resettlement and rehabilitation (R&R) being completed. The order is an endorsement of the people’s claim that the R&R of the project has been lagging very much behind the project construction.

However, the NGT order is not the only important recent development. In early September 2015, lenders to the project met and virtually decided to take over the project from the hands of its private promoters, the MW Corp (earlier S Kumars).

This represents the coming of a full circle for the project which was India’s first privatised hydropower project of the post-1991 liberalisation era. It had been handed over to S Kumars, a textile and suitings company with no experience in power projects, in the early 1990s as a part of the opening up of the Indian economy that began in 1991. 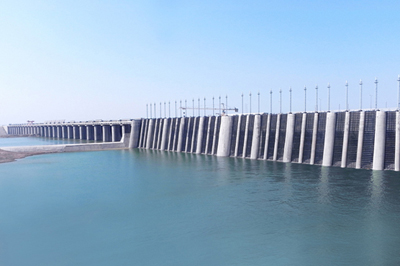 Opening up the power sector to allow private – and foreign - companies to generate electricity was the first major element of these reforms, dubbed LPG, that is, Liberalisation, Privatisation, Globalisation.

These developments, as described above vindicate both, the criticism against the project on its performance on R&R front, as well as the questions raised about the wisdom of privatising the project.

The promise of privatisation

The Maheshwar project represents much of what was wrong with privatisation in the hydropower sector. The costs of the project kept going up. Even as the project claimed to have tied up all finances, it could not manage to fund crucial activities and the pace of the project remained slow.

The project which was handed over to S Kumars in 1994 remains incomplete till date. The transactions between the government and the private developer were opaque and the power purchase agreement was heavily skewed in favour of the private company. There were allegations of crony capitalism and of undue favours from the government in giving financial support. Worse, the project could not manage the rehabilitation, which was one of the primary reasons for the massive struggle of the oustees emerging against the project.

The government and the company vehemently refuted all allegations of shortcomings or irregularities. However, the recent developments clearly show the serious problems with the project.

On the financial brink

The meeting of the lenders to the Maheshwar project took place on 8 September 2015. The record of this meeting shows that as of date, the investors, including the promoters, have brought in Rs. 499 crores as equity. As against this, the lenders have brought in Rs. 1815 crores, or close to 78% of the money spent so far. The major lenders are mostly public or government owned financial entities including Power Finance Corporation (Rs. 700 crores), HUDCO (Rs. 259 Crores), Rural Electrification Corporation (Rs. 250 crores) and State Bank of India (Rs. 200 crores). This belies the claim that privatisation brings significant funds to the sector.

In spite of spending close to Rs. 2315 crores as mentioned above, the project is still not complete. Central Electricity Authority (CEA) reported that in September 2015, the cost of project stood at Rs. 4635 crores, up from the original estimate of Rs. 1569 crores. CEA also notes that since November 2011, the work has been suspended due to cash flow problems. In fact, even before 2011, the work had been reduced to a trickle. This raises questions over the claim that private operators are inherently more efficient than public sector ones.

The funds mismanagement – even though the project claimed that it has secured all funding and had reached financial closure, it still ran into severe financial crunch – affected the R&R work directly. At least, this is the reason put forward for the resettlement lagging, though there are other reasons as well, like non-availability of land to resettle the people. Another serious impact of this funds crunch was that the state government – through the Madhya Pradesh Power Management Company  - had to pay out Rs. 102 crores to one of the lenders, as the government had guaranteed the borrowing of the project and the private company was not able to pay it back. Why the Government of Madhya Pradesh (MP) had provided the guarantee in the first place is also a moot question.

With the project virtually at a standstill, a committee was formed on 16 October 2014 under the chairmanship of Additional Chief Secretary (Finance), Government of MP, to find ways to salvage the project.

The committee gave its report on 2 May 2015. In the report, the committee proposed three possible scenarios. In the first scenario, the project promoter was to bring in additional equity and debt and complete the project. This was to total to Rs. 1800 crores, with Rs. 600 crores as equity and rest as debt. The actually amount would probably be higher, since the gap between the CEA estimated project cost and money already spent is Rs. 2300 crores.

Indeed, observers are putting project cost estimates even higher, at Rs. 6000 crores, and so the amount to be brought in could go as high as Rs. 3685 crores. The promoter was to be given three months to do this, failing which the second option would automatically come in. This involved the lenders taking over the project, and getting some public sector operator to take over the project.

Of course, this meant that the public sector operator would have to bring in the Rs. 1800 crores or more. In this scenario, the private promoter will not get any return on the equity which he had already brought in, for at least 15 years.

The final scenario, in case no public company is willing to buy in into the project, is that the project would have to be abandoned.

The lenders’ meet of 8 September 2015 noted that the promoter had not been able to bring in the required money in the 90 days given to him, and as a result, the scenario two has become operational. Thus, lenders have initiated the process to take majority shares in the company and secure management control, even as the search is on for a public company to take over the project.

The scenario is not optimistic, however. Any government company that takes over will have to bring in Rs. 1800 crores at least, most likely much more. Moreover, the state government has declared that it will put an upper limit to the tariff it will pay for the electricity from the project at Rs. 5.32 per unit (per KWH).

This is likely to be too less to allow recovery of the costs, including capital and interest. It may be pointed out that in December 2011 itself, the tariff from the project was estimated at Rs. 8.53 per unit. To put this in perspective, power from newly bid solar plants is costing about Rs. 5-6 per unit. At the same time, the new buyer will have to contend with the fact that there has been little maintenance at the dam and facilities already erected, and they could potentially take up lot of money for refurbishment.

And of course, as the NGT order also confirms, even as project work has gone ahead and many areas affected, R&R is lagging far behind. This is a violation of the condition of environmental clearance of the project, and is also a gross violation of the human rights of the oustees.

Clearly, the private promoter – S Kumars, now going under the name of MW Corp – has left behind a huge mess and there is no certainty that someone will step in to clean it up. Even if someone does indeed come in, it will be a government company, which means that public money will be used to pull a private company out of trouble, and clean up the problems created by it.

An issue of accountability 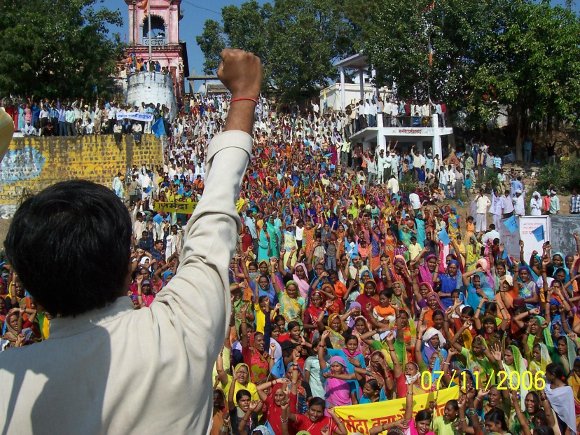 Protest by the oustees of the Maheshwar project near the dam site, on the banks of the Narmada river in 2006. Pic: Narmada Bachao Andolan

In a press statement of 31 October 2015, the Narmada Bachao Andolan, which is leading the struggle of the Maheshwar oustees, has welcomed the removal of S Kumars, and the takeover of the project by the government. But it has also demanded that the government must ensure that the tariff from the electricity should not go beyond Rs. 3.50 per unit. Is it really possible for the government to do this?

It has also pointed out that “...the Narmada Bachao Andolan has been raising serious issues related to the viability of the project and the R&R of the oustees, since the last 20 years. Thousands of oustees have waged an intense and persistent struggle for the last 20 years on the issues of the prohibitively high cost of power from this project, the financial irregularities shown in the CAG reports, and the complete failure of the project holders to provide rehabilitation and resettlement to thousands of oustees.”

In other words, the government had been forewarned many times over, and since the last 20 years. Yet, the project is at a stage where there  is a  likelihood that the third scenario – of project being abandoned – would materialise. In such a case, larger questions arise.

The wall of the Maheshwar dam is already built. So the river has been severely disrupted. The ecosystem has been affected. And people have been displaced. Given this, if the project is abandoned, who will be accountable for the all these, and for the several thousand crore rupees spent? Maheshwar then also offers a chance to demonstrate how those liable for the mess can be held accountable. We can only hope that this opportunity will be handled conscientiously.