While those with mental disorders are at increased danger for being infected with HIV, the onset of the virus itself gives rise to a number of mental illnesses. Puja Awasthi reports.
30 August 2009 -

When Gyan Murti's mind first began to unravel, her family paid little attention, explaining away her delusions and ramblings as adolescent petulance. The Murti family's reaction might appear normal enough, given that we live in a country where though 65 of every 1000 people suffer from mental disorders, there are just 0.4 psychiatrists, 0.04 psychiatric nurses, 0.02 psychologists and 0.02 social workers per 100,000 people. [Sources: Indian Journal of Community Medicine, Vol 26, 2001 and WHO's Atlas: Country Profiles on Mental Health Resources 2001, respectively].

Murti, then 24, had started displaying the first signs of schizophrenia, a mental disorder that causes abnormalities in the perception of reality. Psychiatric wisdom holds that schizophrenia responds well to early medical intervention. But in Murti's case, eight years would go by before she would receive any medical help. Murti's middle class family was so embarrassed by their daughter's absurd behavior that they chose to keep her away from medical and thus societal attention, preferring occasionally to bring in tantriks and ojhas to "cure" her. It was only when the girl started hearing voices and began talking to them incessantly, tearing through the peace at home that the family took her to a doctor.

The physician prescribed an HIV test; Murti tested positive. She believes she became infected by men promising to help her during periods in her illness when she would run away from home for days to look (in her delusion, she insisted her parents were not her 'real' parents, and that she must find the family she was born into, which she believed had abandoned her).

While like Murti, those with mental disorders are at increased danger for being infected with HIV due to their poor understanding of risk factors and general vulnerability, the onset of HIV itself gives rise to a number of mental illnesses. Dr Prabhat Sitholey, former head of the department of Psychiatry at CSSMU explains: "The world over psychiatric disorders stemming from infectious diseases are widespread. All such individuals are doubly disadvantaged as they do not display expected health seeking behavior and are prone to a diminished state of responsiveness."

Often women will display the worst symptoms but receive the least care.

•  Neglect of the mentally ill
•  Popular culture to fight AIDS

The New Oxford Textbook of Psychiatry (Oxford University Press, ed. 2000) notes: "Patients infected with HIV are at an increased risk for a variety of mental disorders". These stem both from the direct infections of the central nervous system by the virus or from infections precipitated by the virus. In addition, the knowledge of a positive diagnosis will leave patients with intrusive, brooding thoughts, panic attacks, social isolation, verbal expressions of rage or feelings of desperation, altered behavior, depression and even suicidal tendencies.

Such correlations have been well borne out by research. One such study of "Suicidal Ideation in HIV positive patients", (CSSMU, September 2008) tracked 250 patients in the 18-60 age group to conclude that almost half of them displayed suicidal tendencies. The pre-disposition became more pronounced in those who also had depression, adjustment disorders, indulged in substance abuse or displayed other mental illnesses. Such tendencies are also more marked in females, those who are unemployed, unmarried and those who come from low socio economic status families (family income less than Rs.5000 a month).

Conversely it is also possible that diagnosis of a mental condition such as depression might be made difficult because the infection itself might become the cause of many depressive symptoms such as insomnia, lack of appetite, weight loss, fatigue, lack of energy and difficulties in concentration.

Dr Harjeet Singh, Head of the Department of Psychiatry at Chattrapati Shahuji Maharaj Medical University (CSMMU) in Lucknow, says how a person will react to the knowledge of being HIV positive will depend on personality type. "A risk taking personality, habituated to indulging in behavior that invited the infection, might well have an initial reaction of nonchalance when the diagnosis is made. Another who is anxious will display greater levels of nervousness", he says.

Often women will display the worst of these symptoms but receive the least care because they are not the breadwinners and also prone to neglecting their health. Dr Saurabh Paliwal, counselor at CSSMU's Anti Retroviral Therapy (ART) centre says, "While both men and women will react with despair to a positive diagnosis, men have a tendency to quickly resume some semblance of normalcy as they go out to work. Women become more prone to depression. Among educated women there is a great sense of rage and betrayal at having contracted the infection from their husbands. They are also burdened by a stronger sense of guilt"

In case of patients with mental illnesses, the prognosis becomes worse. "Often the treatment for both - HIV and mental illness - is lifelong. The patient might not have the requisite care and support at home to adhere to the strict treatment regimen. It helps if the patient is in consultation with a doctor who has adequate knowledge of HIV, but at the district level or below, such doctors are rarities", says Paliwal.

Shiv Shankar Kashyap, a 46-year-old clothes seller, lost his wife last November to a number of opportunistic infections that had swamped her post contracting the HIV, a diagnosis that was made only four months before her death. Though her CD4 count (a blood test to determine how well the immune system of a HIV positive person is functioning) did not warrant ART, she refused to take medication for tuberculosis, mouth sores and gastric troubles that plagued her. "Perhaps she was guilty for having got infected. I pleaded with her to take her medicines but she would refuse. I believe she lost the will to live", says Kashyap who did not disclose his wife's positive status to the family fearing that she would be shunned. He is negative, as are his three children. Kashyap's wife, who was a graduate, also provides the illustration to Paliwal's contention that educated women are likely to be burdened by a stronger sense of guilt at having contracted the infection. 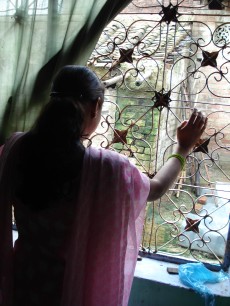 Photo: Pooja Kumar needed treatment for hysteria after she tested positive. Her husband and child both fell victim to HIV.

Ten years ago, Pooja Kumar (28) lost her husband, Deepak. When he died in Mumbai, Kumar was at her paternal home in Malihabad (20 kilometres from Lucknow). He had just been diagnosed HIV positive and Kumar believes his family killed him to escape the shame. "His body was found three days later", she shrugs. Dazed by grief Kumar slipped into a gray zone refusing to eat or drink for days. For two months she remained at CSSMU's psychiatric ward under treatment for hysteria while tests revealed her positive status. Her younger son who was then two died soon after. "I do not know if he was positive, just that I was unable to care for him. Nobody took HIV with so much seriousness back then", she says.

Burdened by the death of her son, for three more years Kumar refused ART till she realized she would have to care for her elder son. Today she works as an accredited social health activist under the National Rural Health Mission, but shies away from disclosing her status. She says it is her elder brother, the owner of a medical shop, who gets her medicines. "There are still days when I feel like banging my head persistently against the wall. I have lost my mind to the virus", she mumbles.

Dr Krishna Dutt, CSSMU's sole clinical psychologist says the role of counseling needs to be re-examined under the HIV-AIDS lens. "Even though the profile of HIV-AIDS has changed from an inevitably fatal infection to a chronically manageable condition, the tendency of counselors is to regard positive patients with dread. They feel that the patient will die anyway and counseling will not be of much use. We need a paradigm shift. While we have learned how to welcome life, we have failed to prepare for death. This is not a healthy mould for counseling."

A random questioning of patients at the ART centre reveals that the counseling they receive here is limited to commonplace injunctions.

•  Neglect of the mentally ill
•  Popular culture to fight AIDS

But there don't seem to be enough doctors to pay attention. At the crowded ART centre at CSSMU, where free medicines are given to registered HIV patients, Dr Neetu Gupta, a senior medical officer, says the three doctors posted at the centre have too little time to counsel all new cases on the psychological pitfalls of the infection. "We have 150 cases here daily. On an average each new patient gets only 10 minutes. It is not enough to answer all questions and address all doubts", she says adding that there is nothing in the form of a policy for dealing with those who are afflicted with mental disorders and HIV. Not surprising given that the country lacks a National Policy on Mental Health.

A random questioning of patients at the ART centre reveals that the counseling they receive here is limited to commonplace injunctions: wash your hands, drink boiled water, eat nutritiously and have safe sex. There is no mention of mental well being.

Murti, still on medication for schizophrenia, feels she could have been saved had the family paid her greater attention. "There was never any warmth", she rues. Today she works part time with the Varanasi network for Positive people (part of a statewide such group) and is trying to reconnect the dots in her life. The treatment has done her good, and she hopes to get married one day. Her family would like her to wed a non-positive man. Fortunately, medical intervention and a will to get better salvaged Murti's life, but many more continue to be lost to ignorance and shame.