Ignorance can lead to blindness

There are 70 million diabetics in India, 80 percent of them have vision problems about which they are either not aware or lack access to good eye care. Swapna Majumdar reports how NGOs are partnering to reach out to the marginalised and providing them better eye care and prevention.
27 September 2017 -

Worrying as these figures may be, what is even more startling is that 90 per cent of blindness arising from diabetic retinopathy is preventable. Yet, about 80 per cent of diabetics, who suffer from eyesight problems, either don’t know how to take proper eye care or don’t have the access to services.  Additionally, a significant proportion of persons with diabetes do not know that they have the disease, according to a 2016 study carried out in 11 cities in 9 states of India by the Indian Institute of Public Health (IIPH), Hyderabad.

“India is sitting at the threshold of an impending “epidemic” of sight threatening diabetic retinopathy (STDR) unless proactive measures are taken”, contended Dr GN Murthy, the lead author of the study and director, IIPH. 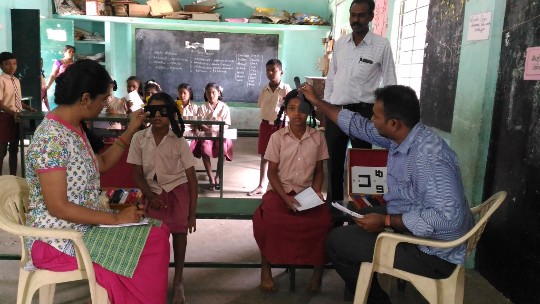 “Almost 28 per cent of newly detected middle-class diabetics did not know they were diabetic and only a tenth of the persons with diabetes were aware that poorly controlled blood glucose was an important risk factor for diabetic retinopathy (DR),” said Murthy, also a Professor of Public Health Eye Care and Disability, London School of Hygiene and Tropical Medicine.

Murthy, who shared findings of the study at the second World Congress of Optometry held recently in Hyderabad, further pointed out that previous  research in India had shown that more than 50 per cent of people with diabetes had poor blood glucose control, uncontrolled hypertension and high cholesterol, all three potential risk factors for DR.

The good news, he said, was that danger of blindness from DR could be reduced by better management of these risk factors and by early detection and treatment of STDR.

Insufficient measures by the govt.

However, the 2011 National Programme on the Prevention and Control of Cancer, Diabetes, Cardiovascular diseases and Stroke being piloted in 500 districts by the central government in response to the increase in non communicable diseases (NCDs) to identify those at risk and follow up with diagnosis and treatment at the primary and community health centres, has only a passing mention of eye care for diabetics, stating that vision should be checked once a year.

In its checklist for preventing complications for diabetics, it does not mention eye care at all. In its six-point list, it states only testing for blood sugar levels, glycosylated haemoglobin levels(HbA1c), examination of feet for sensations and circulation, and, for calluses, dryness, sores, infections and injuries, Further, blood pressure needs to be checked and the patient must be helped to give up tobacco if he/she continues to use tobacco. The sixth and last suggestion reinforces a change in lifestyle.

Then how can awareness be increased? How can access to quality eye health be expanded? How can services be made inclusive for traditionally marginalized communities, women and rural populations, who are at greatest risk primarily because of their ignorance of the risks of blindness?

NGOs in the forefront

“We believe every Indian should have access to information and proper eye care. Often underprivileged communities lack people who can provide them information and test their eyes. The limited availability of trained ophthalmologists makes it more difficult,” said Vinod Daniel, CEO, India Vision Institute (IVI), a not-for-profit promoting excellence in vision care delivery. IVI is a joint initiative of the LV Prasad Eye Institute and, Brien Holden Vision Institute. 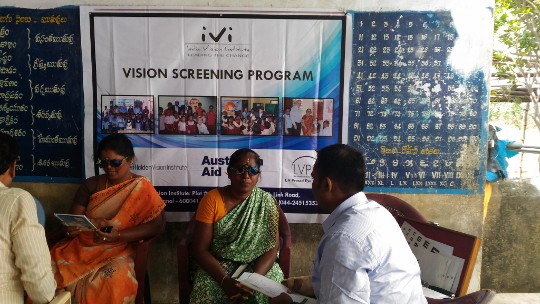 Considering the India has only 40,000 optometrists as against the 1,50,000 required according to the Indian Journal of Ophthalmology, the shortage of trained service providers means that  the economically and socially disadvantaged communities including women and children, fall through the cracks.

In fact, this is why accessibility, quality vision and eye health were the key issues chosen for the second World Optometry Congress , said Professor Kevin Naidoo, the conference chair. He pointed out that the Congress, a biennial event initiated by the World Council of Optometry in partnership with the Asia Pacific Council of Optometry and the India Vision Institute, aimed at addressing the twin challenge of quality care and access.

“Data masks disparities. So when there is no access to eye care, ocular health will be impacted. Quality care is important because of several health factors including the correlation between diabetics and blindness and knowing this can be prevented,” stated Naidoo, who is also the CEO of the Brien Holden Vision Institute, Sydney.

A  recent Lancet study funded by the Brien Holden Vision Institute  with researchers from  the Hyderabad based  L V Prasad Eye Institute among others found  that by 2020, prevalence rate for blindness could rise up to 0.50 per cent and 3.06 per cent for vision impairment.

Therefore, ensuring preventable blindness through timely intervention is a priority for IVI, Daniel says. “We have been engaged in reaching out to the rural communities and women and creating awareness in places where there is no one to test their eyes.  So far, we have conducted 1,20,000 screening over the past five years. Sometimes a pair of spectacles is all what is needed to improve quality of life. So if our screening shows that glasses are required, we provide it free of cost to the underprivileged,” Daniel revealed. 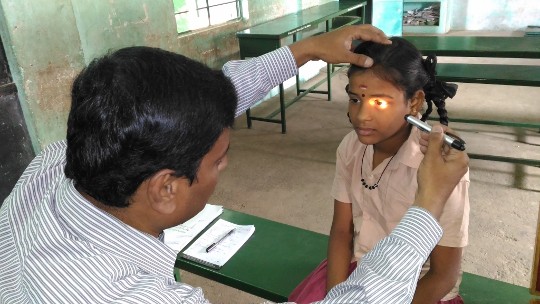 Vision centres that provide primary eye care for a population of 50,000 is another novel initiative to reach out to the rural poor. Instituted by the LV Prasad Eye Institute , these centres are embedded in villages to enable better access and treatment.

“The underserved population carries a much greater risk for blindness and visual impairment. Lack of awareness, availability, accessibility, and affordability of services constitute major barriers for care. These centres take care of all these issues. Additionally, we train local women as technicians so that it encourages more women to test their eyes,. An example of the success of this model is that our assessment has found that in Mudhole village in Adilabad district of Telangana, 50 per cent of our eye care recipients were women and these centres have helped in bringing down the prevalence of blindness,” said GN Rao, founder and chair, L V Prasad Eye Institute.

Clearly, an integrated approach where the eye care and diabetic care services work together can effectively prevent vision loss. Leading eye care and diabetic care non-governmental organizations  like Public health Foundation of India and its allied institutions like the Indian Institute for Public Health  have begun working to develop sustainable models of integrated care in 10 pilot districts across India by strengthening the public-funded district health system at the district level thanks to a grant given by the Queen Elizabeth Diamond Jubilee Trust.

The ball will then be in the government’s court to use these scalable models of integrated diabetic care. It must ensure there are more optometrists and that public-funded diabetic clinics provide services for DR.

Since less than a third of diabetes doctors have basic vision charts in their clinics, and nearly half of patients lose their sight before being diagnosed, it is crucial to ensure that the basics are in place. Only then, can there be early detection and treatment and preventable blindness be really prevented.