India’s decision and actions in appointing the first president of the BRICS New Development Bank will signal its thrust on social and environmental sustainability, not only within the new financial order but also domestically, writes Sunita Dubey.
05 January 2015 -

In December 2014, India announced that it had begun the internal process to set up the US $100-billion New Development Bank (NDB) aimed at funding projects in developing nations, and expressed hope that other BRICS members would also be finalising the respective instruments of ratification at the earliest.

Speaking at the Third Economic and Financial Forum of BRICS Countries, organised by the China Economic Daily, the Indian Ambassador to China, Ashok K. Kantha, said, "It is heartening that this project has moved so rapidly as a result of our joint efforts, and the Inter-Governmental Agreement to establish the NDB was signed at the Fortaleza Summit. India is privileged to appoint the first President of the bank.” 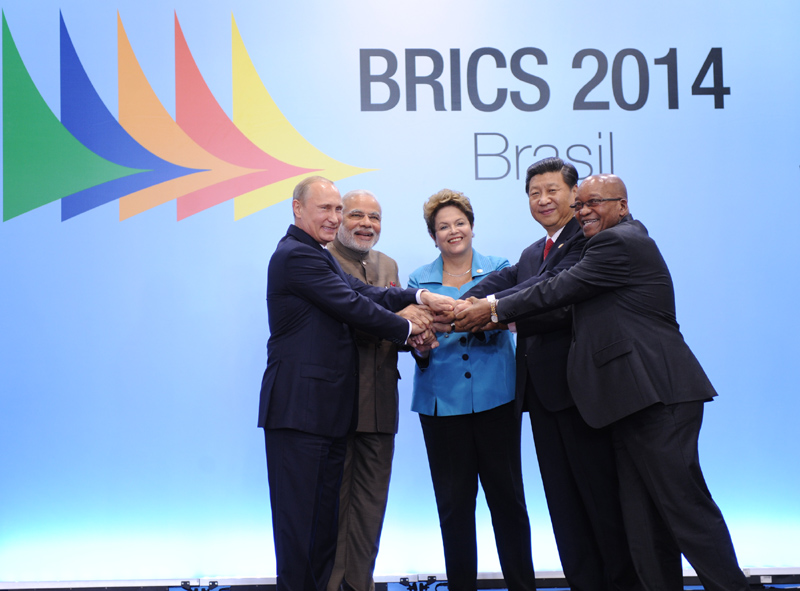 Indian Prime Minister Narendra Modi with leaders of the other BRICS nations at the Sixth BRICS Summit in Fortaleza, Brazil in July 2014. Pic: Press Information Bureau

India is, therefore, in the process of setting up a committee to identify the first President of the NDB. This is going to be a critical appointment, as the strategic foundation for the Bank will be laid under the presidency. The choice of the final nominee by the Indian government will be a big indicator of how the goal of promoting sustainable development will be pursued and executed by the NDB.

In 2014, the BRICS countries – Brazil, Russia, India, China and South Africa – launched the NDB as an alternative to the dominant Washington-based lenders. An agreement was also reached to set up a Contingent Reserve Arrangement (CRA) that would give member countries a cushion against sudden external pressures on their currencies and help address volatility in financial flows.

The NDB was decided to be set up with a starting capital of US $50 billion, with a provision to increase it to US $100 billion. The CRA was conceived of as a US $100-billion fund.

The BRICS Development Bank was conceived at a time when emerging countries were pushing for a greater role and quotas in the affairs of the World Bank and the IMF, in which Europe and the US have had traditional dominance. This proposal was mainly pushed by India to establish a South-South Development Bank as an emerging economies’ alternative to the existing West-led financial institutions.

Justifying the “BRICS Bank”, the then External Affairs Minister of India, S M Krishna had said that the setting up of a BRICS-led South-South bank would not be an “aberration” from the global financial architecture, but instead it would “supplement” the efforts of other multilateral institutions in meeting the investment requirement of BRICS and other developing countries.

The BRICS bank can’t by itself end the United States’ dominance of the global financial system. But it is true that with the growing influence of the China Development Bank, the Brazilian Development Bank (BNDES) and an expanding list of important regional lending institutions, the world’s borrowers are no longer quite so dependent on Western lenders.

A few figures put this in perspective: in 2013, the World Bank disbursed US $52.6 billion. The same year, Brazil’s BNDES invested US $85 billion, and its Chinese equivalent extended loans valued at US $240 billion.

However, while Brazil and China’s overseas development assistance runs into billions, India is still looking to reach a comparatively meagre US $1.3 billion in 2014-15. India’s assistance goes largely to its neighbours – Afghanistan, Bhutan and Nepal, and increasingly to Africa in aid for infrastructure, IT, and capacity building and training.

On the other hand, India has been the largest recipient of development aid over the years, as nearly 25 percent of the population in India continues to live on less than US $2 a day, compared to 10 percent or less in the other BRICS countries.

To be legitimate, effective and successful, the BRICS bank will have to follow international rules of transparency, accountability and monitoring as well as loan practices as stringent as those of the IMF and World Bank. However, for that to happen, there are several issues that need to be discussed and resolved, mainly around social and environmental safeguards, transparency and civil society involvement.

The NDB should not become an avenue for circumventing policies and standards, which have evolved over the ages at various international financial institutions, often after many years of lobbying from civil society groups.

There are also lessons to be learnt from the various pitfalls of the Bretton Woods Institutions, where too much emphasis on mega projects and trickle-down economics has led to too little change on the ground for the large amount of cumulative spending over the years.

Therefore, the BRICS group needs to develop a new vision and development model for the proposed bank; otherwise, it could end up either being a mirror image of the existing international development banks or what is worse, something even more flawed. It is critical to involve civil society groups and other stakeholders in this process from the very beginning, rather than as an afterthought or as a fig leaf.

There is no doubt that China is the strongest among the BRICS countries in terms of economic prowess and global influence. Despite the Chinese edge, it is hoped that India will not be a pushover in the NDB, as the country attaches great importance to the BRICS coalition.

India’s experience with poverty reduction, social infrastructure, health care and technology can enable it to play a constructive role in the years ahead, and help it put forth innovative and bold ideas for development finance.

Like China, India too is struggling with polluted cities and unsustainable growth models, and its quest for sustainable development domestically can give it an experiential edge over other donor countries. Based on that experience, it can push sustainability as a founding principle for the NDB, and also suggest ways to achieve it. This should also be reflected in the choice and nomination of the NDB President by Indian government.

Given the social and environmental impacts of unsustainable growth models in a climate-constrained world, India should not eye a president who will only prioritise economic growth in the belief that this will eventually lead to poverty-reduction and social improvements. While fostering growth in trade and manufacturing is relevant, protecting human rights, social and environmental standards and good governance are also equally important for the success of the NDB.

India’s geo-political gains and strength should not be limited to being a part of the BRICS, but as the largest democracy, the country should insist on principles of equity, transparency, participation, and socially and environmentally-just development. The presidency of the NDB can be a great opportunity for the present government to showcase its intent on these fronts.