An uneven, but important journey

Jalyatra is a welcome addition to the literature on water systems in India, and one hopes that it once again brings attention to the traditional systems and the key principles behind them, writes Shripad Dharmadhikary.
29 June 2008 -

"In spite of surplus water, and one of the world's richest traditions of managing it, India's water crisis has reached critical levels. This, according to Nitya Jacob, is because inherited knowledge regarding traditional methods of managing and maintaining water resources has been consistently ignored."

So says the blurb behind this book. Indeed, the most powerful - and a very painful - impression delivered by this book is the graphic portrayal of the deterioration of traditional systems of water harvesting and management in the country. Of course, the condition of our water resources - traditional as well as new - is not a national secret. A walk through town, near the banks of rivers that have been converted to sewers, around lakes and tanks encroached upon to build colonies or past the dried up wells now functioning as garbage bins is sufficient to reveal the state of affairs. Jacob juxtaposes the current rot with the glory of the yesteryears when these systems not only catered to the material requirements of water for drinking and agriculture, but were centres of the community's social and cultural lives. 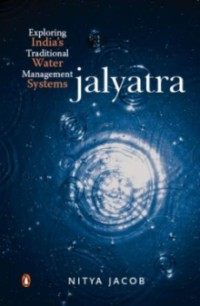 India has a vast heritage of highly evolved and diverse water management systems. Each system was different from the other as each had been shaped by local topography, climate, vegetation and other factors. These systems were not merely technologies or techniques but had their own complex management structures rooted in the social organisations of the community. These were both, managed by and accountable to the local population. Jacob's yatra - journey - takes him, and us through a 'sampling' of some of these elaborate systems.

The author leads the readers from the coastal areas of Goa to the hills of Meghalaya, from Chambal and Shekhawati in Rajasthan in the west to Uttarakhand in the North, to Bundelkhand in central India and Tamilnadu in the south. He describes the specifics of the main traditional water systems in these areas, how they evolved in sync with the local geo-climatic conditions, and the intricate management institutions that developed simultaneously. He also shows how interference by the British and then our own rulers led to the slow but steady deterioration of these systems.

Among the root causes, he points out, is the alienation of the systems from the local communities by taking away their control on them, at the same time, by promising that the government will take care of their water needs, relieve local communities from the sense of responsibility that was the key to keeping these systems running. The result is decay and degeneration.

But this journey is uneven. In some parts, the book lays out in fascinating detail and insight the intricacies of these systems. For example, the look at the eris of Tamilnadu - the cresecent shaped water tanks ... built against the slope of the land ... earthen walls, sometimes lined with stones, making up two-third the sidesâ¦one-third ... open, facing the slope from where rainwater flows to fill it. The overflow of one eri fills the next and the next one's overflow fills the next." These eris have been recorded as early as 3rd century BC and their average age is 700 years! These eris, and tanks, ponds and dugouts have provided irrigation and drinking water for people and animals and have recharged groundwater in vast areas of Tamilnadu, Karnataka and Andhra Pradesh.

The author also describes the neerkattis - the water keepers who manage these eris. These neerkattis, appointed by the gram sabhas, are mostly from the so called lower castes, and once appointed, the job is hereditary. Since the so called lower castes have not owned land, they are expected to be unbiased in their decisions regarding the management and distribution of water. The slow decline of the eris and tanks, and the reasons behind this are also brought out. More heartening is to read about the efforts that are on, by organisations like the DHAN Foundation, to revive and revitalise these systems.

The khazaans of Goa and the talaabs of Bundelkhand also make for interesting reading. These chapters also bring out well the ingenuity of the communities that shaped these systems in tune with the complexities of the local ecology and landscape. They describe the institutions of management and control that are an inextricable part of the systems themselves. And the chapter also take the readers through the process of the deterioration of these systems, the reasons including taking away the control of the local institutions, 'modernisation', and the inevitable human greed.

The author also examines recent developments against the potential of these traditional systems. In Bundelkhand, with his detailed examination of the area, he shows that the Ken-Betwa river linking project, the first link of the ambitious Interlinking of Rivers Program will lead to disastrous consequences. He also points out that the real solution to Bundelkhand's water problems is to revive the talaab system, something that can be done at a relatively small cost compared to programs like big dams and river linking.

India has a vast heritage of highly evolved and diverse water management systems. Each system was different from the other as each had been shaped by local topography, climate, vegetation and other factors.

•  Deposit rain, draw water
•  A gurukula for surangas
•  The root of the solution
•  Plenty on the roof

Unfortunately, other parts of the book lack similar depth. At places, long-winded descriptions - of local events, history and legend, presumably to build the context and create an ambience called for by a travelogue - end up being distractions as they bear little relation to the water systems, and seem out of place.

This reviewer was particularly dismayed by the quality of the printing of photographs. Good photos, printed well could have much enhanced the impact of the book, and the publishers should take the responsibility for this shortcoming. Hopefully, this will be remedied in the second edition of the book.

In spite of this, the book is a welcome addition to the literature on water systems in India, and one hopes that it once again brings attention to the traditional systems and the key principles behind them - decentralisation, heterogeneity, diverse technologies to suit differing local conditions and management institutions that are controlled by and accountable to the people.

There is the inevitable temptation to compare this book with the two classics that have looked at traditional water systems in India - Centre for Science and Environment's Dying Wisdom, and Anupam Mishra's Aaj Bhi Khare Hai Talaab (and Rajasthan ki Rajat Boonde). But one should avoid this, as the books belong to different genres. Rather one hopes that the book under review - coming at time when more than a decade has passed after those other books were written - helps draw attention once more to the this valuable heritage and, as the author hopes, in generating "a debate over what is appropriate, and what is not, in India's quest for water and food security".

This is important as India's traditional water systems - and the principles on which they have been organised - are among the elements that hold greatest promise to provide answers to modern India's water problems, water needs and water crises.