The Delhi High Court rules that a proposed thermal power plant cannot come up unless its likely impact on the growth on alphonso mangoes is studied first. Kanchi Kohli reports.
14 October 2009 -

This does not read like a court decision, but is more like a sermon. Nonetheless, this homily is what the JSW Energy (Ratnagiri) Ltd (JSWREL) received on 18 September 2009 - the High Court of Delhi asked the Expert Appraisal Committee (EAC) at the Ministry of Environment and Forests (MoEF) to re-examine the environment clearance given to JSWERL's 1200 MW thermal powet plant located in Jaigad in Ratnagiri District, Maharashtra, in May 2007. In effect, this amounts to a stay on any further construction on the project. This surprise decision came from a two-judge bench comprising of Chief Justice A P Shah and Justice Sanjiv Khanna.

Let's rewind a year back, when things were very different. Back then, the National Environment Appellate Authority (NEAA) based in New Delhi had taken an anti-environment stance in its ruling in favour of JSWREL (see this earlier article). The NEAA is the body before which an aggrieved person can challenge environment clearances granted to industrial or infrastructure projects. But the meticulous contentions filed by a local farmer Balchandra Bhikaji Nalwade (through pro-bono lawyers Ritwick Dutta and Rahul Chaudhary) were written off by the members of the NEAA in favour of the company.

A range of contentions had been raised on the procedures and quality of envrionment assessments. These include the fact that the Environment Impact Assessment (EIA) report was not made avaiilable to the locally affected people 30 days prior to a public hearing, as is mandatory. Another point was that the EIA report did not duly assess the impacts on the ecologically sensitive areas and mangroves in the area. The district is also known for its famous alphonso mangoes, which are very susceptible to decline in yield and quality due to pollution from the thermal plant. This too was not addressed. Further, the project authorities did not put forward any alternate sites for their project, as required by law.

None of this made an impact with the NEAA, which ruled that the large gap between energy demand and supply in the state warranted environment clearance to the project (more details on the NEAA judgement are at this link). Nalwade and the advocates challenged this ruling before the Delhi High Court soon after. The High Court heard the matter over several hearings reserved its judgement on 21 April 2009. The final decision, pronounced on 18 September 2009, reversed the NEAA's verdict.

For the NEAA, this is another reminder of how far it has fallen in its work. Its reputation has been so marred since its founding that even the Government is now thinking of creating a different institution (see this article).

The High Court's words quoted above reflect a paricular aspect of the case which troubled the judges. At the time of the hearing for environment clearnace, the EAC was aware that a case against the project was pending before the Bombay High Court, filed by the Ratnagiri Zila Zagruk Manch in which the issue relating to impact of the project on alphonso mango plantations had been raised. JSWREL informed the EAC that a preliminary study was carried out by the Konkan Krishi Vidyapeeth (Agricultural University), Dapoli (KKVD). The minutes of the meeting further show that the full report would be available in six months' time. The right thing to do would have been to wait for this work to be completed.

But the EAC chose not to wait six months. Rather, the committee ruled, "... it appears that the activities to be undertaken by JSWERL ... are not likely to affect horticultural plantation and mango plantation, as well as marine life, significantly provided JSWERL strictly maintains its adherence to its commitments made for preventing environmental pollution from time to time in long run." Based on this line of thinking and other facts the EAC recommended the project for environment clearance, but added a condition that while the project can be granted clearnace, the assessment of impact on alphonso mangoes should be carried out alongside.

What if a study after 2 years were to reveal irreparable damage to the mangoes? Would JSWERL give up its construction or operations? The EIA took no view on this - in effect its ruling appeared to assume that any study to assess the potential impact of the plant on mangoes in the area would not find anything adverse to the project. One is tempted to ask, why carry out impact assessments then, if the EIA can itself take a view on what those assessments might find? 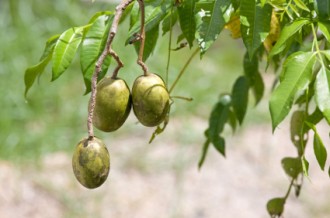 Fortunately, the High Court has take a dim view of this stance. In its order, the High Court noted that "any final assessment would require a detailed study for a period of four years to evaluate the impact on mango plantations and the marine life/fisheries ...". The court observed that the March 2007 decision of the EAC was not based on the complete report of the KKVD but only on its preliminary findings, which were in turn based on the Rapid EIA prepared by a consultant paid by the JSWREL itself.

The High Court has now sent the matter back to the EAC, asking them to review their decision based on the final report of the KKVD and the data collected and analysed by the insitution. The order states, "the Expert Appraisal Committee will not be prejudiced and influenced by their earlier clearance or the order passed by NEAA. Re-examination exercise will be completed expeditiously, and preferably within a period of three months from today. While re-considering the matter the Expert Appraisal Committee will keep in mind the principle of sustainable development as explained and propounded by the Supreme Court."

The court's order is also clear that until specific approval is granted by the Expert Appraisal Committee, the thermal power plant will not be made operational and integrated with the power grid." The order also says that the environment clearance, if granted again, will be appealable before the NEAA.

This is an exemplary decision, especially because it quotes several critical environmental principles related to natural justice and also interprets sustainable development in a way where pollution and damage to the ecosystem and environment must not exceed nature's carrying capacity.

However, even this welcome judgement is dissapointing on a few counts. One of them is the fact that the original application had brought to notice that the project authorities had not even made an attempt to locate alternate sites other than Jaigad. Unfortunately, the High Court has gone by the company's explaination that they did not do this because the proposed site was ideal due to its accessibility by road, availability of table top barren land, availability of sea water for cooling, potential for unloading of imported coal and exporting fly ash. Also there were no rehabilitation and resettlement issues as the area was not inhabited.

In effect, the company argued that the advantages of the present location were so great that it had done away with looking for an alternative. It seems to have escaped the company's attention that there is no waiver in the law for such advantages - if that were the case, every project developer would argue that his chosen location is simply the best. The High Court's inaction on this front has allowed the company a free pass with this view.

Irrespective, the two-judge bench has taken a very strong decision. It is for us to see how the EAC, which is already looking at the environment clearance for the expansion of the same power plant, will redeem itself of the deeply faulty decision it gave in the first place. And as for any remote, residual faith in the NEAA, the less said the better.