A weak look at judicial reforms

A trickle-down approach that sees justice through the lens of economic growth is the basis for many of its arguments, omissions and conclusions. As a result, it is of use mainly to practitioners of the law, who encounter some of the issues raised in detailed ways. Bikram Jeet Batra reviews "Judicial Reforms in India: Issues and Aspects".

The blurb on the back-cover begins with a reference to the 'vulnerability of the poor', but the collection of essays in Judicial Reforms in India: Issues and Aspects restricts itself to discussing judicial reform in the context of economic growth - focussing on protection of property and contract enforcement. The editors, Arnab Kumar Hazra and Bibek Debroy too begin their introduction by asserting the belated recognition of legal reforms as a critical ingredient of economic reforms; their reference to poverty is a few paragraphs later: "A balanced swift, affordable (accessible) and fair justice delivery system besides promoting law and order, aids in the development of markets, investments, including foreign direct investments, and economic growth, and therefore helps in poverty reduction" (emphasis added). This reliance on the trickle-down approach lies at the centre of the collection of essays explaining many of its arguments, omissions and conclusions.

In fact while later in the introduction the editors claim that they do not wish to enter into the debate on "whether law reform should facilitate market transactions, or whether the emphasis should be on promoting good governance and alleviating poverty", the focus of the essays themselves leaves little doubt about their position in this debate. For one, Bibek Debroy and Laveesh Bhandari's essay is titled 'Legal Structure and Economic Freedom of States in India' and is a classic neo-liberal plea for minimal government interference and regulation of commerce. Unsurprisingly it asserts that labour law has been unduly favouring rights of workers over business, and supports increasing of unorganised labour force to enable "hire and fire in order to maximise efficiency of workforce and profits", as also Special Economic Zones. 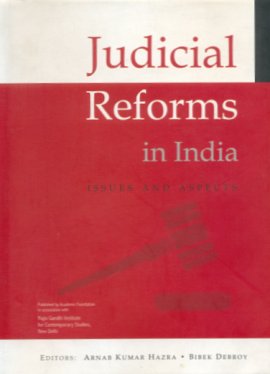 It is this specific understanding of reform, often couched in the language of 'rule of law' and 'access to justice' that is deeply problematic. When the judicial reform process and access to justice is only for the benefit of corporations and commerce and not the people, access to justice is merely shorthand for safer access to markets, and the rule of law cannot but be seen as the "rule of capital" (Baxi, 2006). The fact that 'good governance' machinery is used to erode rights of persons and communities who come in the path of market expansion and economic growth leads one to agree with Upendra Baxi that such a reading of 'access to justice' is part of the problem, and not the solution.

Over half a decade ago the move in Canada was towards promoting justice rather than merely enabling better access to the legal system. (Hughes and Mossman: 2001). Unfortunately this collection of essays still considers access to the courts as the main task at hand. Such an approach assumes the courts to be a neutral terrain where class, caste, religion, gender and other similar factors play no role whatsoever. Justice Bhuraka's essay, 'Contemporary Views on Access to Justice in India' further restricts the notion of access to justice only to the independence of the judiciary proceeding thereafter to a general coverage on the use of information and communication technology in the courts, alternate dispute resolution (ADR) and financial autonomy for the courts. This blinkered approach ignores other 'contemporary' concerns around the possibility and quality of justice, especially those raised by dalit rights, women's rights activists or by the various social movements in the country (PCJA&JR 2007).

Instead of recognising such concerns, the author observes that the judiciary "commands the respect of the people of India" and is "held in high esteem" in the developing and developed countries while the editors too assert that the legal system is regarded to be fair. In fact one (seemingly mandatory) essay titled Justice and the Poor by Videh Upadhyay aside, the collection of essays is startlingly silent on crucial issues that relate to the vast majority of citizens.

The nuts and bolts of reforms

For readers who can however look beyond such fundamental political positions, the collection offers a number of essays that examine the nuts and bolts of judicial reforms; which the editors distinguish from statutory law reform (changes required in legislation) and administrative law reform (changes required in rules, regulations, orders and instructions). However even here, the ambit of judicial reform is restricted to a discussion only on reduction of the backlog of pending cases and tackling incoming cases more efficiently. Read within this limited sphere, some of the essays may be useful to those working specifically on reducing backlogs in courts.

One of the major drawbacks of this collection is its inconsistent quality. Referencing and citation in the volume are often inadequate, reducing the usability of the collection. Further, while some contributions to the collection are well researched, others dawdle endlessly.

While most of the book completely ignores the criminal justice system, this receives attention in the paper, 'Crime Deterrence and the Need for Reforms: An analysis of Indian States' by Debashis Chakraborty, Arnab Kumar Hazra and Pavel Chakraborty. The authors use data from Crime in India (1954 - 2002) to show growth rate of crime. However they use only data of Indian Penal Code (IPC) crimes and ignore Special and Local Laws (SLL), suggesting that these cover largely minor offences. Unfortunately, this is not true; the authors forget that besides minor legislation even TADA and POTA were classified as SLL! Given the thousands over arrests that took place under POTA itself (instead of the IPC) in the late-nineties are not included in their data, their conclusion that the growth rate of 'crime' was below 1 per cent between 1999 and 2002 raises doubts.

Other analysis too is poor: observing the fact that the number of prisons is inadequate, the authors conclude that the focus of government action is not on the severity of punishment. Arriving at such a conclusion in the absence of a study on punishment provided in new legislation passed raises doubts about its validity.

More seriously, the diagnosis in the 'agendas for reform' set out by the authors in the essay is simply reproduced from the now-discredited Malimath report (MHA: 2003). The authors write, "The two major problems besieging the criminal justice system are huge pendency of criminal cases along with the inordinate delay in disposal of criminal cases on one hand and the low rate of conviction in cases involving serious crimes on the other." An identical paragraph can be found on Page 4 of the Malimath Report available on the Ministry's website. Plagiarism aside, it is the politics of the agenda for such reform that raises concern. This identification of reform priorities is not a careless act but a careful statement on what is deemed vital, and what is secondary. No surprise then that the focus is on delay and low convictions rather than the large number of undertrials in Indian prisons - who form between 66 to 70 per cent of the total prison population and are often underprivileged, from rural and agricultural backgrounds. (NCRB: 2006, NHRC: 2004)

While it is argued that tackling delay eventually helps under-trials, a far more effective strategy would be to avoid unnecessary arrests altogether. In early November 2000 the Law Commission of India published a Consultation Paper on Law Relating to Arrest in which it cited the third Report of the National Police Commission which suggested that nearly 60 per cent of all arrests by the police were either unnecessary or unjustified. While the present authors do make a nominal reference to reducing arrests as part of 'police reform' (as opposed to 'judicial reform'), there is very little deliberation on the lack of use and misuse by judges of bail provisions. Certainly no empirical research is provided for the number of cases where persons are in jail either on bailable offences where judges refuse to release them on personal bond or because they could not afford the exorbitant bail conditions set by the Court despite a number of Supreme Court judgements to the contrary.

There's little to recommend in this collection for the lay-reader. The obvious neo-liberal emphasis of the editors on 'growth rate' ensures that reform is seen only in the context of economic growth and in terms of tackling pendency of cases, while the fact that the Indian judiciary offers no hope for the vast majority of citizens is nowhere even raised. Even in tackling pendency, the essays barely go beyond 'improvement in infrastructure and court productivity'. With regard to criminal law the collection virtually pushes all issues of human rights and fair trial off the table, with its clear emphasis on 'increasing convictions' and 'speedier justice'. E.g. the references to judicial remand by 'video conferencing' do not even consider the dangers of such use of technology which effectively do away with the duty of the magistrate to check for custodial violence and reduce the entire safeguard to a mere formality. Similarly there is no thought given to the viability of plea-bargaining in the Indian context where the bulk of accused persons are illiterate, poor and therefore vulnerable to coercion by the police and prosecutors.

The volume is perhaps most useful in highlighting what is referred to as "the cunning of judicial reform" - the use of the agenda of legal empowerment of the poor for state and corporate interest (Baxi, P: 2007). Given that one of the book's editors is Secretary General, Punjab Haryana and Delhi Chamber of Commerce and Industry, and the other is staff consultant to the Asian Development Bank for the India Administration of Justice Project (a project conducted jointly with the Government of India), and that a number of other authors were also associated with the same project, it is clear that this book represents views that are predominant within the corridors of power. A fuller analysis of judicial reforms, unburdened by this singular lens, is still awaited.