The battlefield of hopes

As in many other struggles around the country, in Kalinganagar too there are fractures within the opposition to the proposed industrial plants, and families are torn apart by bleak choices. Freny Manecksha reports.
17 December 2010 -

At first sight Chandia appears to be just another village with groves of trees and scattered houses. A second look presents an incongruous sight - the village is encircled by factory chimneys, and several of the houses are broken. It is a visible symbol of how the villages of Kalinganagar are under siege by the forces of industrialisation.

It was in the 1990s that Kalinganagar in Jajapur district, a backward region with forested lands, began to be touted as the new industrial destination. Initially there was no resistance because the people - most of who were desperately poor - hoped the industrial houses would provide them with employment and with an improved standard of living. But in the implementation of these early plans, neither the Orissa government nor the industrial houses saw the locals as partners in their grandiose vision. Consequently this led to bitter and sometimes bloody confrontation. And as land acqusition for the projects got underway, the protest movement began.

Still, it was only in January 2006 that Kalinganagar catapulted into the national headlines - with the killing of 12 adivasis in police firing. They were part of a 3000-strong crowd of protesters armed with bows and arrows, declaring their opposition to the construction of a boundary wall by the Tatas for their proposed steel plant. The plant would displace people of three panchayats - Chandia, Gobarghatti and Gadapur. The deaths precipitated an unprecedented road-block for months by the people, and resulting immobilisation of traffic. The struggle became more organised, and the Visthapan Virodhi Jana Manch was formed to resist displacement.

The Tatas have announced their decision to have a steel plant in place by 2014, and have announced a compensation package as well, but the standoff continues even today. Several families in the three villages have refused to move out.

The issues surrounding Kalinganagar and the state's bid for rapid industrialisation are complex. The Orissa government began a frenzied drive to make Kalinganagar a steel hub because of its close proximity to chromite and iron mines, and because two national highways cut through the belt linking it with Kolkata and Chennai. MoUs were signed with a number of companies including TISCO, Jindal Stainless, Maharashtra Seamless, MAL Industries etc. (As of now only two plants have begun operations Nilachal Ispat Nigam and MESCO.)

Land acquisition for the plants was begun by the state's nodal agency - Industrial Infrastructure Development Corporation (IDCO) - in 1994. A sizeable chunk of the population in this mineral-rich belt comprises of dalits and adivasis (Hos, Santhals and Mundas) whose main source of livelihood is cultivation of paddy. But since a majority of adivasis were cultivating on lands without clear titles, there were problems with compensation. Over decades, the state had made scarcely any effort in updating land records, leading to another major problem of undivided land with various families claiming compensation rights.

An MoU was signed with the Tatas in 2004, and the disenchantment with the compensation process was compounded when it came to be known that IDCO was selling land to Tatas and the other industrial houses at a rate five times higher than the compensation doled out to the original land-owners. Another major grievance was that two of the companies who had begun operations renegaded on their promises of providing employment to locals, raising huge fears among those displaced.

Social activist Prafula Samantara of the Lok Shakti Abhiyan, who supports several people's movements against land grabs by big corporations sees the resistance movement in Kalinganagar as unique. Born out of anger when the people felt the "dreams" sold to them had soured. They saw there were no jobs, and that "compensation" was merely a market term. They now sought justice. It was against this backdrop that the VVJM demanded resolution of the land issues and rights over possessed lands and intensified its struggle against the Tata steel plant. 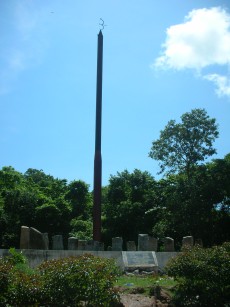 Civil rights activists say that one of the most distressing aspects in this struggle has been the manner in which the state has colluded with corporate clout to inflict atrocities and to brand the protesters as Naxalites. (Above: Bir Bhoomi, the the memorial raised to commemorate the 12 adivasis who died while protesting against the proposed Tata steel plant.)

Jema Honago, an anganwadi helper in Chandia expressed some of her fears, "We are essentially a farming community. We cannot live without our land. The Tatas are supplying rations to those in transit camps but for how long? Once the land is in their possession the handouts will stop. We are not educated. We cannot compete in the job market. We will be reduced to beggary just like some of the 600 families who were displaced by Nilachal Isspat and Jindal." Namita Bada, also from Chandia, said she was given casual employment by the Rohit Ferrao company but that as soon as it was known she came from the village that had put up resistance she was told there was no work for her.

Civil rights activists say that one of the most distressing aspects in this struggle has been the manner in which the state has colluded with corporate clout to inflict atrocities and to brand the protesters as Naxalites. (Interestingly one of the Niira Radia tapes has her complaining that the Tatas are up against Naxalites in Kalinganagar.)

At Chandia, Ravi Jarike leader of the VVMS explained how the villagers have literally been corralled and held under siege. They cannot step out of the village because they fear arrests by the police. He also complained about other rights abuses.

On March 30, 2010, under the guise of beginning work for a corridor road, the workers for Tata accompanied by the police and BJD party workers came into Baligotha village. Jarike alleged that they then embarked on a series of incidents aimed at intimidation. "They contaminated our water supply pouring urine and kerosene in the wells. They broke down homes."

Jarike also charged that on another occasion Tata workers escorted by police came into the villages on the pretext of breaking down the empty houses of families who have taken the compensation and shifted out. Instead they began vandalizing the houses of village residents. At Chandia, where there are still some 120 houses standing, the bid to carry out the demolition drive led to a bloody scuffle with the villagers and police in which one man - Laxman Jamuda - lost his life.

As in many other struggles around the country, here too there were fractures within the opposition to the plants. Families were torn apart by rival views on their future prospects, with some brothers staying back and others opting for compensation from the company. In a major blow to the VVMS, one of its leaders Chakradhar Haibru, (senior) decided to accept the state's ex gratia compensation and even attended the bhumi puja of the plant at Ambagadai village.

At his house, which adjoins the Bir Bhoomi - the memorial commemorating the adivasis killed in the 2006 firings - the veteran community leader appeared to be sad and dejected. He said his capitulation sprang from a sense of utter helplessness. "I was in the forefront of the fight against the Jindals and against Maharashtra Seamless. I saw a small baby being dragged into jail with its parents. But no one did anything against this human rights violation. Section 302 is routinely filed against us adivasis but where are the cases being lodged against the police? The plight of adivasis, in this nation, is far worse than cats and dogs."

He expressed his anguish in the manner in which his people are being divided. "The adivasi in the resettlement camp is my brother and so is the one in the village resisting displacement. But now we can scarcely recognise each other."

At the Tatas' Danagadi transit camp a couple spoke of their experiences since shifting out and agreeing to the compensation package. The husband, who has been entrusted with a kind of gardener's job, expressed apprehensions about his future as far as employment is concerned. His wife, however, was satisfied with the compensation paid but declared her impatience with those who were still resisting. "It is because of them that we cannot get other benefits. I have told the Tata people to give us some bows and arrows so we can fight them."

It is a chilling thought to know she was talking about her fellow community members. Whatever the outcome of this battle there is one irrevocable and tragic certainty - the utter destruction of the sense of community among the people here.