A livelihoods programme for villages on the fringes of Kaziranga National Park makes big gains in the fight against poaching, and also recognises the importance of locals as stakeholders in wildlife conservation. Ratna Bharali Talukdar reports.
06 June 2010 -

From an infamous rhino poacher who had been imprisoned five times, to a dedicated soldier of anti-poaching operations, life has made a full U-turn for Balak Singh Teron, from Natundanga village in Ghorakati area under the Burapahar Range of the Kaziranga National Park (KNP), famous for its one-horned rhinoceros.

Until June 2008 was an associate of a rhino-poaching gang, trekking up and down the Karbi Anglong Hills at the southern boundary of the National Park, spending his time hiding away from his village. Today, he is leading a happy married life, working as a daily wage earner and simultaneously helping Forest Officials in nabbing poachers. The credit for this transformation goes to the Eco-Development programme initiated by the park authorities for promoting viable livelihood opportunities among the villagers living in the fringe areas of KNP.

"I used to earn Rs.5000 for killing every rhino. Even after being released from prison, I fled to Karbi Anglong to hide my identity. Then, one day some people from my village asked me to come back to lead a normal life. I am fortunate that course of my life has changed and I am happy to live a dignified life" Teron narrates. 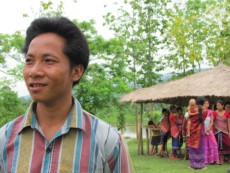 The park authorities have identified 110 villages around the national park for formation of EDCs, of which 55 have been covered so far. (Above: Balak Singh Teron, a rhino poacher now employed in anti-poaching operations following EDC intervention.)

•  Poaching: Winning the battle
•  How not to protect the lions

The EDC programme was adopted by the KNP authorities in 2008, much later than in some other parts of the country, but here it has met with enormous success. The programme aims to intensify conservation activities of the National Park, creating a congenial relationship between park authorities and local people living in the fringe areas so that their active cooperation would check poaching, while fostering the conservation process. Within two years, the programme has proved to be so successful that it has not only provided gainful livelihood support to Teron and 14 other hardcore poachers, it has also promoted ethnic culture and heritage, adding to the travel delight of thousands of domestic and foreign tourists who visit the Park each year.

The process, however, was not an easy one. In Ghorakati, where the park authorities initiated EDC programmes first, illegal poaching was rampant, and the people living there were resisting even the entry of forest officials into their villages. Poachers used to have hideouts in these villages. "Despite their resistance, we kept visiting frequently. Gradually, a section of youth from Natundanga village, who were unemployed, began showing interest in what we were proposing," says Ikramul Majid, Range Officer. "These youth agreed to the unique livelihood package that we had designed for them, providing income and also supporting their traditional customs,"

The forest officials helped the reformed poachers open a food outlet to serve traditional Karbi cuisine to tourists. The park authorities also did their bit, introducing hill trekking to nearby Baneswar Devalaya, a temple located on the serene hilltop amidst lush green, in addition to elephant and jeep safari. This served twin purposes - showcasing the rich tribal culture to visitors, while at the same time making a living selling delicious and mouthwatering ethnic dishes.

The first entrants into the programme were very excited. They themselves visited the villages around, spreading the messages of the livelihood schemes that forest officials had designed for them. "This is the most important learning experience I've had from working among the tribal people. It is difficult to win their confidence initially, but the moment they accept it, things become easier", says Majid.

Thirteen EDCs were formed, covering every village of Burapahar range. A convention was held on 01 June 2008, with participation from all the EDCs amidst a vibrant gathering of 5000 tribals, discussing the livelihood opportunities that could be generated out of their own resources. The Convention unanimously resolved to mainstream all those tribal youth who were engaged in illegal poaching, by bringing them back to their own villages. Accordingly, 14 young me - five from Natundanga, three from Amgurichang, four from Phulaguri and two from Bamini Chikari, all of them either engaged in poaching or working as a linkmen of the poachers living outside their villages - were brought back at the initiative of the villagers, assuring them of alternate livelihood opportunities.

"The EDCs are formed with participation of all the families from the village - and their executive committee has 50 per cent women membership. We promote formation of homogeneous Self Help groups (SHGs) to design livelihood schemes ranging from weaving, agriculture allied, petty business, piggery, bee-keeping and others based on their traditional skills," says Dibyadhar Gogoi, the Divisional Forest Officer of Kaziranga National Park.

"Once our SHG was formed, the forest officials guided us on how to showcase our traditional delicacies before the tourists who visit the park. We have done about Rs.66,000 in business so far. We are now working on more innovative ideas, so that we can earn more," says a happy Kamal Singh Teron, President of the Natundanga SHG, which was formed as part of the EDC approach.

Six selected SHGs undertaking bee-keeping have been given Rs.10,000 each. Additionally, three youth men have been appointed as Tourist Guides, while another has been made a boatman in the Park. Such incentives will be intensified further in future, says Majid.

Kaziranga is a large national park, whose core area spans 430 square kilometers. It is a UNESCO World Heritage Site with rich wildlife resources and vast wilderness. The park is home to 35 species of mammals - 15 of which are included in Schedule I of the Wildlife Protection Act 1972. The area is also a habitat for 42 species of fishes, and 550 species of birds - of which 25 are globally important and 21 others are listed as near-threatened species.

In November 1916 the area was declared a "Game Sanctuary." In 1950 it was renamed as "Kaziranga Wildlife Sanctuary". Finally, in 1974, the area was rechristened as "Kaziranga National Park." With the annexation of six new additions and two Reserve Forests, the total area of the park has now increased to 1002 sq km.

The pride of KNP is the rhinoceros, and it is the work of the sanctuary in preserving this species that has brought it the most acclaim. Park authorities successfully increased the rhino population from barely two dozen in the early part of the last century - when it was declared as a reserve forest in 1908 with 56,544 acres of land - to 2048 rhinos by 2009. It is also a safe home to a number of large herbivores including 1937 wild buffaloes and 1293 Asiatic elephants (per 2008 animal census records) and 681 last surviving population of swamp deer (census of 2007). Kaziranga was also declared as Tiger Reserve in 2007, and boasts the highest density of tigers in India - with 34 tigers per 100 square kilometers.

The animals migrate to the hilly ranges of Karbi Anglong bordering the park during high monsoon, when the rivers and other water bodies are swollen up. Several corridors of the park cross National Highway 37, providing protection to animals from speeding vehicles. Additionally, the growing population in areas around the park has brought its own pressures - agriculture in most parts, and tea cultivation at the southern periphery.

Tribal people of sevaral EDCs at a gathering to discuss their livelihood programmes.
Photo by Ratna Bharali Talukdar.

All of this has made conservation through EDC-like approaches more crucial for better management through people's participation. Park authorities realised that in order to manage the park and the vast terrain around, it would be critical to involve those living at its fringes and ensure that they too play a role alongside the forest and park officials. Park authorities have identified 110 villages around the national park for formation of EDCs, of which 55 have been covered so far.

The most visible result of the EDC approach and initiatives has been the drastic fall in incidents of illegal poaching of rhinos - from 16 in 2007 to six in both 2008 and 2009. Only two cases have been recorded so far this year. Not a single case of rhino poaching has been reported in the Burapahar Forest Range since the formation of EDCs in 2008, claims the DFO.

The DFO is also busy in designing more innovative and ambitious plans. Next on the horizon is a plan to involve a group of the newly appointed women foresters and forest guards as frontline staff in the flourishing EDC programmes; and to develop certain products including honey, wood-crafts and under the brand name Kaziranga. "With the steady increase of tourists every year, simultaneously with revenue generated out of tourism, we can now carry out a lot of experiments and innovative plans. The park authorities have decided to allot at least 30 per cent of total revenue generated for the EDCs", says Gogoi.

For the local people, the most enthralling experience of the EDC intervention is enjoying elephant rides and jeep safaris inside the national park. Gogoi says, "We arrange to ensure that every person in these fringe villages must visit the park so that they feel closer to the unique ecosystem and rich wildlife of the park, and realise the importance of conservation and come forward to work as a force multiplier in our conservation efforts. Over 5000 people have so far enjoyed the trip."