GOVERNMENT / NREGA TO BE DILUTED?

Will the government heed calls to save rural jobs?

The Prime Minister has received at least two letters in the past week from eminent economists, activists and citizen groups, raising their voices against dilution of the Rural Employment Guarantee Act, which seems imminent from recent announcements by the government.
15 October 2014 -

The Mahatma Gandhi National Rural Employment Guarantee Act 2005 was enacted to provide livelihood security to the rural poor by providing at least one hundred days of guaranteed wage employment to every household in every rural district of the country.

According to a 2014 study by Sandhya Garg of the Indira Gandhi Institute of Development Research, Mumbai, the Act has addressed 41 per cent of the problem of underemployment (estimated 6.66 billion persondays) in rural areas by providing seasonal work of 2.5 billion persondays each year.

Yet another study by Laura Zimmerman of the University of Michigan shows that when implemented properly, the programme arrested distress migration, providing a safety net for the poor in the lean agricultural season. Several other studies have also shown the positive impact of the programme on rural employment, employment among marginalised castes, earnings, and even women’s participation in the labour force. 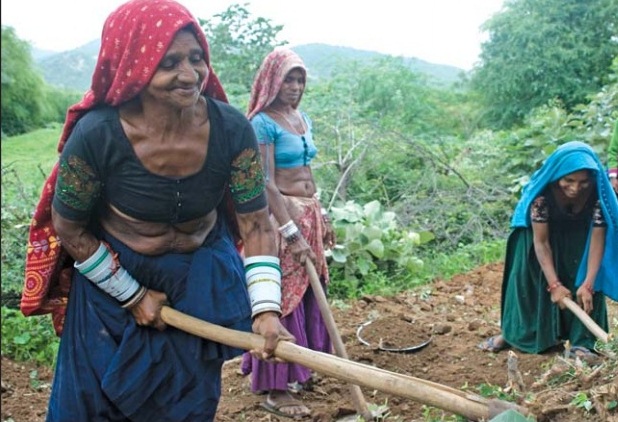 But now, statements made by the new leadership as well as information obtained through RTIs, as shared by the People’s Action for Employment Guarantee, indicate that the government intends to bring in significant changes to the Act, which are feared to have adverse effects on the livelihoods and economic condition of the rural populace.

The changes proposed are primarily to be implemented through three routes as outlined below.

Reducing the minimum labour-material ratio from the current level of 60:40 to 51:49

The change in the ratio of labour and material expenditure was proposed by the Union Minister for Rural Development Nitin Gadkari, citing the alleged inability of project implementation agencies to create “durable and productive” assets because of the constraint on incurring adequate material expenditure given the restrictive ratio.

However, an RTI enquiry on the details of communication between the Joint Secretary, MGNREGA and the Rural Development Minister reveals that the utilisation of material component in the programme works across the country currently stands at 27 per cent as opposed to the permissible limit of 40 per cent, even after having completed 6,38,555 assets.

Why are state governments unable to direct NREGA work towards the creation of more durable assets when they have substantial scope to augment material expenditure even within the existing upper limit? This is one question that needs to be answered. Also noteworthy is the fact that Gadkari’s proposal stands in contrast to the view of officials in the Ministry itself.

The RTI also shows that ministry officials feel that changing the material labour ratio from 60:40 to 51:49 will result in a sharp fall of 40 per cent in employment generated and “5 crore households will be adversely affected by this decision” (emphasis in original). They also apprehend that using up almost half of the budgetary resources for material could mean that the Central Government will have to provide additional resources of up to Rs 20000 crore to meet wage liabilities.

Gadkari, however, replied to these concerns saying that the demand for such a change was reflective of the views of a majority in the legislature, and should be brought about immediately through an amendment in the Act. He countered concerns over shortage of funds for the wage component saying that the government was legally bound to provide additional funds if such demands arose.

Senior officials also point out that past experience has shown that such material intensive works typically “…brought benami contractors, which resulted in corruption and their ultimate deterioration.”

Several other concerns have been highlighted. For example, counting the material component at the district level, instead of at the Gram Panchayat, would place substantial amounts to be allocated at the discretion of the District, opening up the possibility of political considerations, rather than socio-economic realities, deciding the spread of works.

In addition, this will be in violation of the act because Section 16 of the MGNREGA clearly states that “The Gram Panchayat shall be responsible for identification of the projects in the Gram Panchayat area to be taken up under a Scheme as per the recommendations of the Gram Sabha and the Ward Sabhas and for executing and supervising such works.”

It could also be held contrary to the provisions of Article 243-G of the Constitution which lays down that implementation of schemes for economic development and social justice shall be the responsibility of Panchayats.

Communication from the Central Government to States fixing fund allocations for the financial year reveals that the demand-driven nature of the Act has now been changed to an allocation based one.

Though a lot has been said about the large social sector spending of the erstwhile government, the percentage of the MGNREGA allocation to the GDP has been steadily decreasing from 0.87 per cent in 2009-10 to 0.59 per cent in 2013-14. As a result of insufficient funds to the programme, the Central Government is forced to ration funds to State Governments.

A letter from the Secretary at the Rural Development Department of the Government of Bihar to the Director (MGNREGA) at the Union Rural Development Ministry shows that the state had requested a release of central assistance worth Rs 1082.40 crore to the State Employment Guarantee Fund (under the Act), against which only Rs 256.40 crore had been released. This was insufficient to meet the state’s outstanding liability that stood at Rs 624.16 crore.

In a reflection on how such funds squeeze may affect the overall programme at large, the letter says, “…the implementation of MGNREGA has been severely impacted due to the acute shortage of funds. The entitlements in form of wages/unemployment allowance/delayed compensation payment will further be hampered as the State has no resources to pay them.”

Indeed, as per records of the Ministry of Rural Development, up to September 2014, 56 per cent of the total wages disbursed are delayed. There is also a trend of delays in wage payments actually increasing over time.

In September 2014, several media reports indicated that Gadkari was contemplating restricting the rural employment guarantee scheme to tribal and backward districts of the country only.

The RTI also confirms that the targetting of the programme is, in fact, being considered on the premise that the 2005 Act does not require all India Coverage, especially in states such as Punjab, Haryana, Maharashtra, Gujarat, Tamil Nadu, Kerala etc (except in a few really backward areas in these).

Communication from the Ministry says that "the Act needs to be amended through the Parliament to enable its coverage only in backward districts/blocks." It further states that the Ministry is examining this issue as instructed by PMO, following a presentation made by the Prime Minister himself in June 2014.

All of the major changes highlighted above have been viewed as having a potentially negative impact on the effectiveness of the rural job programme, leading eminent economists, academicians, development experts and citizens’ groups to raise their voices in unison against such moves.

As the above facts came to light, activists under the banner of People’s Action for Employment Guarantee (PAEG) called upon the government to immediately revoke moves to dilute the Act. In an open letter addressed to the Prime Minister on 8 October 2014, signed by over 200 eminent citizens, the PAEG wrote:

“These changes are inimical to the spirit of the Act and compromise its basic objectives. They will only benefit the contractor class and other middlemen, and severely undermine the employment generating potential of the MGNREGA. The changes are also being undertaken without any public consultation. The MGNREGA was passed unanimously by all parties and all members of Parliament. We fundamentally object to this critical social legislation being undermined through casual use of executive powers and even a parliamentary majority.”

The letter also expresses concern over the reported budget squeeze and consequent default in wage payments, urging that “The MGNREGA budget should be based on work demand, keeping with the spirit of the act, without any discretionary cuts.”

On 14 October, a group of 28 economists including Jean Dreze, who was one of the chief brains behind the scheme, also wrote to the PM, expressing their concerns over the future of the NREGA and urging him to "ensure that the programme receives all the support it requires to survive and thrive."

Referring to the proposals for change and some of the already-perceived effects, the economists wrote,

“Wages have been frozen in real terms, and long delays in wage payments have further reduced their real value. The Act's initial provisions for compensation in the event of delayed payments have been removed. The labour-material ratio is sought to be reduced from 60:40 to 51:49 without any evidence that this would raise the productivity of NREGA works. For the first time, the Central Government is imposing caps on NREGA expenditure on state governments, undermining the principle of work on demand.

Last but not least, the Central Government appears to be considering an amendment aimed at restricting the NREGA to the country's poorest 200 districts. This runs against a fundamental premise of the Act: gainful employment that affords basic economic security is a human right. Even India's relatively prosperous districts are unlikely to be free from unemployment or poverty in the foreseeable future.”

Whether these voices actually reach the decision-makers, and more importantly whether they influence policy making in the corridors of power, is something that remains to be seen.