While Mayawati's projects to build parks and statues have drawn derision in the drawing rooms of the stately homes in the country, the people at her rallies are in awe of her. Her work is Dalit power, they feel and will make her immortal. Kulsum Mustafa has more.
14 May 2009 -

Lucknow - (WFS) - She inspires awe and respect in some, fear and approbation in others. Mayawati, the first woman chief minister of Uttar Pradesh (UP), may not be standing for elections personally this time, but everybody's attention is focused on her. As for Mayawati herself, she has her eyes trained on Delhi and the prime minister's chair. Clearly, this is a woman who doesn't suffer from false modesty. She makes no bones of her prime ministerial ambitions and is constantly exhorting her supporters to vote in a way that will make a "Dalit ki Beti" (daughter of a Dalit) the prime minister of India.

A show of woman power: There is always a huge turnout of rural women at all of BSP leader, Mayawati's rallies. Pic: Kulsum Mustafa\WFS.

There is no one quite like Mayawati in Indian politics. For the urban elite, the prospect of this woman - who figures in 'Forbes' list of the world's most powerful women politicians - coming to power at the Centre is deeply disturbing. A woman from the lower echelons of society who speaks in a language that is unvarnished, even brash, appears to be the very antithesis of everything they expect in a politician. They point to her well-known penchant for power politics and for amassing wealth and decry her eccentric obsession with constructing mammoth statues of herself and her late mentor, Kanshi Ram.

But for those across the great caste and class divides that marks India and form Mayawati's core support base, she can do no wrong. She is the symbol of their own redemption, a source of never ending inspiration. Mayawati, who has degrees in education and law, chose politics over government service at the instance of founder of the Bahujan Samaj Party (BSP), Kanshi Ram. It was he who groomed the young woman to be his political heir. Today, if Mayawati dreams big and projects herself as the first Dalit woman aspirant for India's prime ministership, so do her supporters.

"She makes us feel so good. She inspires me as a woman," says Shanti, 20, a college student, who had missed classes to attend her Azamgarh rally.

Recently, much to her delight at an election rally in Kushinagar, UP, she was presented with a model of the Indian Parliament. The artful creator of the model, in a bid to please Mayawati, had taken care to ensure the essential add-ons. On one side of the circular construct stood a tiny statue of Dr B.R. Ambedkar, noted Scheduled Caste leader and one of the founding fathers of the country; on the other was the elephant, the symbol of Mayawati's BSP.

Rural women have a large presence in Mayawati's election rallies. They cry themselves hoarse shouting slogans like, "UP is ours already, now it's time to capture Delhi" and "Our sister will be PM, the world is saying so". The slogans indicate an allegiance that few politicians in the country can hope for, an allegiance, which has caste identity as its bedrock. The scene is the same wherever Mayawati goes within Uttar Pradesh, whether it is Faizabad or Kannauj, Varanasi or Lucknow. Her rallies invariably draw huge crowds of people, who sit patiently for hours together until she addresses them for a few minutes before leaving for her next rally.

Mayawati is extremely canny about the way she works the crowds. Not only does she dream big for herself, she keeps sowing fresh dreams for everyone who comes to listen to her. Over the years, the dreams have only got bigger and her image is carefully choreographed. There is much drama, pomp and show at her rallies: She never comes in a car, but descends from a helicopter. She does not walk the short distance from the helicopter to the dais but uses a car. She seats herself, not on an ordinary chair, but on an enormous throne. The others, including the candidates for whom she seeks her supporters' votes, stand humbly by her side and touch her feet, one by one.

What's interesting is that many among them are from the higher castes. Therefore, their gestures of humility are meant to transmit the message that Mayawati has completely overturned the old order. Her awe-struck audiences, for the most part Dalits themselves, cannot get enough of such a spectacle. And a spectacle it is: The showering of petals, the red carpet, the paeans of praise sung to her at every meeting, combines with a lot of loud music to impart a touch of festivity.

Then begins the next phase. Mayawati goes to the microphone and begins her address to the crowd. The words come slowly and are replete with local flavour. It is as if she is sharing with her extended family the dreams she has for them; she talks of the struggle and the thorns in her path.

And they lap it all up as expected: "She makes us feel so good. She inspires me as a woman," says Shanti, 20, a college student, who had missed classes to attend her Azamgarh rally.

Shanti's words reflect the election crowd. Everybody sits entranced in total discipline. One feature of a Mayawati rally is the women volunteers who police the crowds. Dressed in blue saris with white blouses, they carry batons and sometimes even use them to prod the occasional unruly person, whistling furiously at them. Such highhandedness does not seem to bother the crowd. It makes no demands apart from a chance to glimpse their famous daughter. Said Dulari, 55, who travelled to an Azamgarh rally with her entire family - they had footed the first five kilometres and then hitched a ride on a tractor for the next six - "She is worthy of generations of respect, she has brought us respect and glory, pulled us out of the hollow of ignominy and brought us into the mainstream." 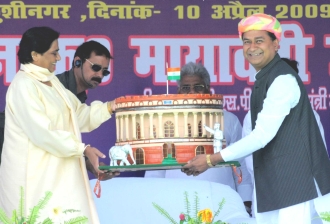 Eyes on the Centre: Mayawati was recently presented with a model of the Parliament signifying that she will fulfill her ambition of becoming the Prime Minister of India. Pic: Kulsum Mustafa\WFS.

Here indeed is the great divide of expectations. While Mayawati's projects to build parks and statues have drawn derision in the drawing rooms of the stately homes in the country, the people at her rallies see things differently. Said Sitamani, a poor farmer from an interior village, "I saw the Ambedkar park in Lucknow recently. It is so magnificent, it signifies Dalit power, it will make our Behenji immortal." At another rally at Kushinagar, Ratna Devi put it this way, "She is a daughter of a Dalit but today she commands the higher castes. She has been a true follower of Baba Bhimrao Ambedkar and of Kanshi Ram."

If you talk a little longer to these people, their comments get more nuanced. Many confess that Mayawati has still not fulfilled her promises to them: Below the Poverty Line (BPL) cards that fetch them subsidised food grain have not been forthcoming, neither have the promised widow pensions, good roads, water or electricity. But there is no anger or resentment when they say this. Rajesh, a cobbler, quietly explains, "We have no complaints. She is from us and will look after our interests."

But those across the political divide are not so forgiving or trusting. "She is responsible for spreading the poison of caste in our society and it will take centuries to wipe away the effects," observes Azhar Naqvi, a fourth generation Congress loyalist, emphatically. "Mayawati is totally power-centric. She is wasting public money to immortalise herself like our former emperors."

S R Darapuri, a retired Inspector General of Police and a Dalit who is contesting elections on the Lok Rajniti Manch ticket from Lucknow agreed, "She only pays lip service to Babasaheb Ambedkar but doesn't follow his golden precepts."

But whatever her critics say, no matter what the outcome of the General Election of the 15th Lok Sabha, one thing can be stated with certainty: Mayawati will continue to dominate the Indian political scene for a long time to come. Political scholar Morris Jones once observed that "politics is more important than caste and caste more important to politics than before." And as long as this is the case, politicians like Mayawati will continue to hold sway over a significant percentage of Indian voters. (Women's Feature Service)