Winning the battle against hunger, silently

Revival of millet cultivation in Medak of Andhra shows how a variety of millets can fight hunger even during drought, keep farmers debt-free, and provide the much-needed nutrition without using pesticides, reports Ramesh Menon.
19 April 2010 -

Be it poor soil conditions or underdeveloped areas in India where agriculture solely depended on the mercy of rain gods, millet cultivation was going on unhindered. Thanks to the Green Revolution in the 60s, despite the immense diversity of agricultural crops, rice and wheat became staple crops and the age-old farming tradition got uprooted even before the farmers realized the adverse consequences of adapting to water-intensive cultivation.

Fortunately, winds of change are blowing across Medak in Andhra Pradesh. Poor and marginal farmers are resurrecting the forgotten art of growing millets, bringing traditional recipes back into the kitchen, and most importantly, insuring themselves against hunger.

About a decade ago, Edavulapalli village in Medak district of Andhra Pradesh was dotted with fallow strips and housed poverty-stricken families. But today, this countryside is lush green with millet cultivation. Farmers with small holdings have been doing wonders with their crops hitherto unheard of. 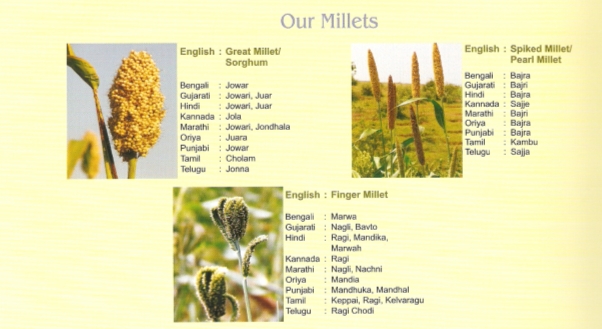 The seeds of this silent revolution were sown 16 years ago by 32 women farmers who formed Sangham -- a self-help group. Slowly, with the help of Deccan Development Society (DDS), an NGO working with poor Dalits in this district, they ploughed the land, revived it with organic manure, and sowed the seeds. A few months later, they saw their fallow fields springing back to life all over again. Now, 52 villages in Medak boast grain banks where quality seeds are being preserved through traditional methods like using dried neem leaves to keep the insects away. Hitherto sidestepped by their male counterparts, women farmers are now steering the whole process and are back in charge of agriculture once again.

Says Lakshmama from Chilamamidi village: we started Sangham with 32 women pooling in five rupees each. No one thought we could do such wonders with our land. Even during drought, none of us will be hungry as we now have good grain banks.

Besides ensuring seeds for the future, Sangham also persuaded each farmer to give a small portion of the output to the grain bank so that it could be distributed among the poorest people. We give millets from the grain bank to the very poor, destitute, and old people who cannot work, says Swarupamma of Edavulapalli. Our life has changed, says a smiling Balamma, a Sangham member in Edavulapalli. Men in our villages used to work as bonded labourers as they had taken loans from landlords. Now we grow millets, own livestock, our children go to school, and we even get to work in each others farms. Some of our children even have mobile phones.

As she talks, proud men stand by appreciating the Sangham members -- the change agents.

Earlier, dry lands in the Deccan plateau had many varieties of agricultural crops growing under rain-fed conditions. This rich cultivated biodiversity helped the farmers deal with recurring droughts with ease. With millet cultivation, they minimized the risks and uncertainty. The soil fertility was also taken care of as they rotated their crops. Their farms were home to over 80 species of leafy greens, tubers, and roots. Many of them were rich in calcium, iron, carotene, vitamin C, riboflavin, and folic acid. The society had intelligently weaved these items into its food system. These crops grew at no extra cost and were a blessing for the poor, especially pregnant and nursing women and children.

We started Sangham with 32 women pooling in five rupees each. No one thought we could do such wonders with our land. Even during drought, none of us will be hungry as we now have good grain banks.

•  The crops of truth
•  Uncultivated foods and the poor

Many years ago, in areas like Zaheerabad in Andhra Pradesh, millet was the staple food as it was not possible to grow rice or wheat in this rain-fed area. But suddenly, rice invaded their kitchens. Everyone loved it. No one bothered about the fact that they had replaced nutritious millets with rice laden with carbohydrates.

Besides Green Revolution, the disappearance of millet cultivation can also be blamed on certain lopsided policy decisions. The government-run Public Distribution System gave out rice and wheat at subsidized rates to the poor. The dependence of farming communities on these staple crops grew as they did not have to toil hard in their fields to grow millets. Sorghum, little millet, pearl millet, finger millet, fox millet, and many others almost disappeared. Slowly, eating habits changed.

Rice was a seductive grain. It was shining white and easy to cook. It could be had without lentils or vegetables. All it needed was a pinch of salt while cooking. But millet had to be cleaned, pounded at a flour mill, kneaded, and then rolled into rotis. When late Andhra chief minister N.T. Rama Rao gave out rice at just Rs 2 per kg, millet cultivation in over 100,000 hectares came to a halt. Farmers needed just Rs 50 a month to buy rice for the family and thought they need not farm anymore, says P V Sateesh, Director of DDS.

In this turnaround, women were the hardest hit. In the past, they were the ones who controlled the family farming activity, saved the seeds for the next season, and took charge of the crop mix. Their assiduous hands put the farming waste to good use. As a result, their cattle got fodder and there was enough fencing material for the fields and straw for the thatched huts. But once rice and wheat cultivation became the focus, they lost their decision-making power.

But DDS, working in 70 villages with 5,000 women farmers from predominantly poor Dalit families, had other holistic ideas. It decided to empower the poor villagers by bringing them back to dry land farming to ensure food security as well as nutrition. They reintroduced millet cultivation by teaching farmers how to revive their fallow strips, catch the rain as it falls, sow good seeds, and build grain banks as an insurance against hunger. Most importantly, it showed them how millets could be turned into tasty recipes. Now, there are millet vadas, dosas, and pulav. Sateesh has even compiled a booklet of various delicacies.

K Nimmaiah, Executive Director, Peoples Action for Creative Education, Nalgonda, says: The seeds available in the markets are of poor quality. Genetically engineered seeds are susceptible to pests and diseases. But our traditional seeds are very resistant and have therefore survived for hundreds of years. Hybridization of crops requires a lot of pesticides to survive. In the past 40 years, we have destroyed our soil with chemical fertilizers and pesticides. It killed the micro-bacterial elements in the soil that provided nutrients to the plant. The only way out is to revive traditional Indian agriculture.

According to Sateesh, research done by DDS in Warangal district of Andhra Pradesh showed that if farmers grew cotton, they earned just about Rs 7,500 and half of it would be spent for production costs. If they grew millets instead, they earned Rs 15,000 an acre with no external costs.

Sateesh says millets should now be introduced in the PDS and other government schemes like the Integrated Child Development Scheme as it is more nutritious than rice or wheat. The young generation does not even know the taste of millets as it was grown by the poor and the marginalized in underdeveloped pockets. It may be a good idea to dovetail the governments employment programmes like NREGA to support millet cultivation.

Millets can become a sustainable alternative if we consider the following factors:

 It grows in toughest conditions. Cultivating one kilo of rice, for instance, requires 1,300 mm of rain. Millets on the other hand, can survive with just 400 mm. In fact, pearl millet grows even on sandy soil, finger millet in saline soil, and barnyard millet in poor problematic soil that cannot support rice or other crops. As much as 28 per cent of the millet production in the world is grown on the Sahel soil in West Africa -- one of the poorest soils in the world that gets less than 500 mm of rainfall.

 It does not need loads of pesticides or fertilizers as farmers in Medak use bio-fertilizers like vermicompost. Most varieties like foxtail millet are pest-resistant. In fact, this variety is even used as an anti-pest agent for storing delicate pulses like green gram. For pest control, they use organic pesticides like ginger-garlic paste. They are producing organic food. Poor farmers were the repertoire of ancient knowledge. But down the years, they got marginalized by market forces, regrets Sateesh.

 Millet farming is holistic. Most millet fields are islands of biodiversity hosting 6-20 crops. Millet farmers in Medak, mostly women, allow weeds to grow in their fields as they use this uncultivated crop as fodder for livestock. Unlike farmers in mainland india, they allow over 150 varieties of weeds to co-exist with the main crops.

Such mixed farming insures the farmers against the vagaries of nature. If one crop fails, they can fall back on other crops. Moreover, this method increases the nutrient content in the soil.

Despite the inherent advantages, millet cultivation has been on the decline in India. Between 1956-61, around 36.2 million hectares were under millet cultivation in India. It fell to 21.31 million hectares between 2001-06. In 1970, India produced 12,172 million tonnes of millets and in 2009, the output fell to 12,000 million tonnes. According to the Food and Agricultural Organization of United Nations, India is the largest producer of millets in the world. But the rate of production is not as high as other cereals like rice and wheat. Still, India remains the highest consumer of millets -- 42 per cent of the global produce.

Says Sateesh: Its high time we truly democratized ourselves. We have to enable and empower communities. If we give resources and responsibilities to our farmers in over 5,00,000 villages, there will never be food security problems.

Ramesh Menon is a freelance journalist based in New Delhi. He got the Ramnath Goenka Award for Excellence in Journalism for an article he wrote for India Together on pesticide poisoning in Punjab.