A job for an infantryman

At best the central police and paramilitary can hold an area once it is taken back, but clearing it and handing it over to them can only be done by the Army, writes Firdaus Ahmed.
15 October 2009 -

On security matters, the headlines have finally shifted away from traditional battle fronts to focussing on central India. The much awaited offensive against naxals was given the go-ahead by the Cabinet Committee on Security, meeting on 9 October 2009. The Home Minister, P Chidambaram, fresh from surveying homeland security in the US, launched the operation, at the same time calling the naxals forward for talks.

The run-up to this operation has been steady. It began with the identification of the naxals as the premier internal security threat to the country by the prime minister. The chief ministers' conference in August that discussed the issue was followed by conferences of the Directors General of Police (DGPs) and Chief Secretaries in mid September. The question posed by the Air Force - i.e. could they fire back in self defence if attacked by the naxals - was finally answered, leading to the deployment of Garuda commandos in defence of air assets involved in logistics, transport, evacuation and reconnaissance. Two Maoist stalwarts, Kobad Ghandy and Chattradhar Mahato, were apprehended.

However, the naxals were the first to get in a blow, by unmistakably announcing their presence in the second ambush at Gadchiroli in Maharashtra. The ambush by a group of 200 Maoists of an armed police party of 40, led to the killing of 17 policemen, one higher than the 16 police lives taken in the attack in May. To counter them, ten Cobra (Combat Battalions for Resolute Action) battalions of the CRPF, formed amidst allegations of corruption, and 38 additional CRP battalions are at various stages of raising and deployment. It will soon be evident if the central policy of using 100,000 members of the CRPF, BSF, ITBP and SSB, rather than the Army, to vacate the so-called 'liberated zones' of Maoists will succeed.

Given their knowledge of terrain, public support, motivation, and long time control of these zones, the naxals have an upper hand. They are made up of youth with nothing to lose and leaders with ideological commitment. Their tribal instincts of survival and fighting in jungles lend themselves to insurgent tactics of hit-and-hide.

Their power is evident in the statistics from 2008. There were over ten incidents in the year in which policemen fatalities counted in double figures. The redoubtable Greyhounds of the AP police lost 36 in one such incident. Fifty five ordinary policemen died when one camp was overrun in Chhattisgarh. In an attack on an armoury at Nayagarh, Orissa, over a 1000 Naxals participated. They are obviously a formidable foe. Can their sway be upturned by policing action?

Although the N N Vohra-led task force's report on internal security required the Centre to create the CRPF as the first line force for internal security, the institutional shortcomings of the force do not permit this. Special central police forces and units of the paramilitary as the BSF, are not trained for operations in jungles or counter insurgency in as difficult areas as central India. The BSF earned its spurs in the Kashmir valley, doing counter-insurgency under great odds and at considerable inconvenience to the people there. The CRPF has not adjusted to the eminently easier conditions of the valley since it has slowly taken over from the BSF there. It is even being ejected from places as Baramula for adverse performance.

Most units being deployed are new raisings and, on that account, low on integration, ethos and functional integration. The ethos of leadership at the officer level, critical to operations, is known by its absence in central police forces. The role of IPS officers is at the supervisory level and not at the consequential tip of the spear. Recent TV images of police clearing of the naxal strongholds in Lalgarh, West Bengal, prompt questions of police capability to take on the Maoists in more difficult areas in the interior.

A job for an infantryman

The recourse to the police forces is to make a virtue out of a necessity. The Army is unwilling to commit itself to operations in central India. Such operations are inevitably of long duration and would suck in surplus military power that the Army prefers to keep on hand as conventional deterrence against Pakistan. Getting into operations away from the borders would slow its reaction - dictated by the new doctrine of Cold Start - to future Pakistani misadventures. It is also unable to spare its paramilitary force, the Rashtriya Rifles, since the situation in Kashmir, in the absence of any political initiative, has not resolved itself.

While the approach, outlined by the prime minister, of having the police create conditions for development by making a dent on the Maoists, is laudable, the question is of its feasibility. The population would be needlessly subject to indeterminate operations, unnecessarily hardening and alienating them, repetition of suppression-alienation cycles as elsewhere. The festering problem would tempt foreign forces to meddle, given India's continuing problems with its neighbours. 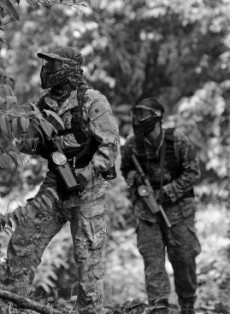 It is better to call the Army in now, rather than after the credibility of the government is diluted in a futile effort to get the job done by the police forces alone.

The Army's reluctance needs scrutiny. The Pakistani threat of attack is remote, and would remain so for some time, since its offensive forces are embroiled in containing the Taliban threat from Swat to Waziristan. The exit of Rashtriya Rifles units from quiet areas in Kashmir is very much feasible. Such demilitarisation would also help with peace building there. To expect jungle clearing to be done by anyone other than an infantryman is wishful. At best the central police and paramilitary can hold an area, but clearing it and handing it over to them can only be done by the Army. It alone has the ethos, operational experience, and equipment.

Eventually, in any case, once the police forces have been exposed after much credibility of the government has been lost and the population imposed upon futilely, the Army will predictably be called in. This can be pre-empted by deploying the Army now. The concept of the current operation is that a central police-led sweep is to be followed by a 'development first' strategy beginning within 30 days. An ineffective sweep would make development a non-starter.

It appears that some moves are afoot for a switch to the Army later, when perhaps the uncertain situation in Pakistan stabilises. The Indian Express reports that the mandate of the 80,000-strong RR of the Army is being expanded from its current temporary one for operations in J&K to a permanent all-India mandate. Progress on this move is not known, but permanence implies accepting the Army's role in internal security. That is a longer debate, which will continue long after choices are made in the present context.

There is also an inescapable subtext to all this - 60 years after becoming a Republic, our internal security problems are still so large that they can only be managed by the Army.