Let the mineral wealth of Central India remain untapped until the people there acquire the capacity to negotiate the terms for its use and benefit directly from doing so, writes Firdaus Ahmed.
29 May 2010 -

The doyen of India's strategists, K Subrahmanyam, has got it wrong before. He advocated Indian vivisection of Pakistan in 1971, not only in the East, but also in the West advising for a drive up to the Indus to bisect West Pakistan between Sindh and Punjab. In the event, India settled only for the former. But even this smaller intervention has had long consequences for India. Pakistan determined that it would go nuclear to overcome its disadvantage in conventional forces, and has since waged an endless proxy war against India under nuclear cover.

Back then, he had argued that India should go nuclear to ensure deterrence, making war prohibitive and resulting in settling of issues as Kashmir. We now know otherwise, with Kashmir figuring in a war and a near war since 1998. This reality, quite different from what was predicted back in the 1970s, should be borne in mind as we read Subrahmanyam's latest (below) on the internal conflict strategy for Central India:

"India cannot industrialise without displacing populations. While the displaced population should be compensated generously, swiftly and made stakeholders in industrialisation, it is unrealistic to talk of eliminating poverty without industrialisation and fast growth. If this proposition is considered valid, India is going to face the challenge of left-wing and secessionist insurgencies to fast growth through efficient and just governance and delivery of services to the common man. To ensure that a three-pronged approach is imperative - an effective civil armed force free from the parochial political influence, a just governance and a fast growing industrialisation cum urbanisation and poverty elimination programme" (from his article, "Wake Up Call" in Dainik Jagran (Hindi), dated 11 April 2010).

Advancing years have not made a dent on his combative prose. However, Subrahmanyam's argument is predicated on a very big 'IF'. India could go down the route of fast growth 'if' it can 'compensate generously', provide 'just governance', ensure 'delivery of services' and undertake 'poverty elimination'. Since the country's past record does not instil confidence that it can do any of this adequately well, it bears questioning whether it should venture down the route of 'displacing populations' at all. In that case, would the country's war in the central provinces - referred to as Operation Green Hunt and avidly denied by authorities - be the wrong war to fight?

It is certain now that an internal war is on. A Home Ministry's statement has it that "some Maoist leaders have been directly contacting certain NGOs and intellectuals to propagate their ideology and persuade them to take steps which would provide support to the CPI (Maoist) ideology." The warning perhaps owes to Arundhati Roy's and Gautam Navlakha's take on the Maoists in Outlook and Economic and Political Weekly respectively, based on some days spent with them in Central India.

As a prescient letter to the editor in the EPW informs, the Karnataka police have served a 'notice' to a journalist on publication of his interview with a Maoist. The subtext is threat of action under Section 43 (F) UAPA (Unlawful Activities Prevention Act, 'Obligation to furnish information'. The article states: 'The failure to furnish the information called for under sub-section (1), or deliberately furnishing false information shall be punishable with imprisonment for a term which may extend to three years or with fine or with both.' Such an embargo on freedom of thought and expression indicates a war is on. 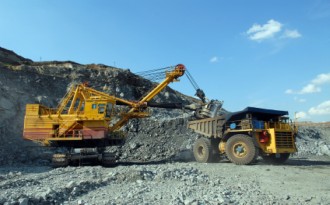 Aruging that development will take time, but the economy needs these resources today is a fraud on the adivasis. The state does not have a good record of bringing them the fruits of 'necessary' development.

Taking the development prong of strategy first, K Subrahmanyam seems to suggest displacement is justifiable, if resettlement is done alongside. The argument is that the outcome in larger good of higher growth rates will help reduce poverty. The government's record on this can best be seen in the case of the Narmada dam. Despite this being under judicial scrutiny and civil society focus, the record has been dismal. On the Maheshwar Hydel project, Chittaroopa Palit, an activist of the Narmada Bachao Andolan (NBA), says, "The dam construction is about 80 per cent complete, but the R&R (resettlement and rehabilitation) is only about five per cent complete (The Hindu, 23 Apr 2010)."

This reality cannot but be even worse in case of remote areas where there is little scrutiny of the government's actions. Displacement figures are taken as 30-60 million since Independence; most of the advantages having been cornered by the 'haves' at the expense of the 'have nots'.

Next, is the military prong. The gag order on the two service chiefs speaking in the wake of the Chintalnar incident shows how sensitive the Home Ministry is to criticism of its military strategy. The E N Rammohan report on the Chintalnar ambush, not released in the open domain, is also apparently critical. In a knee-jerk reaction to another ambush soon thereafter, Dantewada District Collector, Reena Kangale told the Hindustan Times, "We are working on issuing an order that the security personnel should not travel by public transport." This is war by standard operating procedures - SOPs, in military parlance - at its best!

That the paramilitary is not up to the task is evident, since the task of 'jungle bashing' (another apt military jargon) can only be done by infantrymen re-oriented for the purpose (as pointed out in this earlier article). The infantry is being denied to the government due to the Pakistan obsession of its Army, but the result is that the job is now left to the paramilitary. The Canadian High Commission, in an otherwise egregious comment while denying a visa to a retired BSF member, captured the reality of this force somewhat, refering to it as a 'notoriously violent paramilitary unit'. It is no wonder than that the Home Minister, at a medal presentation function to the BSF, reminded them that 'force has to be used responsibly'. The CRPF, notches below the BSF, is at the frontline in this case.

K Subrahmanyam recalls suggesting in the Kargil Committee Report that he headed, "They (the paramilitary) need to be trained to much higher standards of performance and better equipped to deal with terrorist threats. The possibility of adopting an integrated manpower policy for the armed forces, paramilitary forces and the central police forces merit examination." Yet another questionable suggestion, flying as it does in the face of insights from military sociology. Fighting capability at the lower level is dependent on cohesion. 'Integrated' forces from disparate backgrounds cannot hope to develop this. The Army learned this at its cost, and that of worsening the human plight in Kashmir, by deploying the Rashtriya Rifles that suffered similarly.

The Home Minister seeks to expand his mandate, spelling further militarisation at the expense of the non-existent development prong. The argument for this advanced by Swapan Dasgupta in his weekly Sunday Times column is for development to take place, "the state must uproot an illegal military presence first". With the media and civil rights activists intimidated and the higher echelon leadership of IPS officers absent from the frontline, there would be no oversight of operations or resettlement. Continuing military action by Maoists, and all untoward incidents such as that of the tragedy of the train accident at West Midnapore being placed at their door, has placed them at odds with public opinion, making the military option - even one less than effective and very definitely, inefficient - a virtual certainty.

The third suggestion of the Bhisma Pitamah of the strategic community is on improving governance. This is unexceptionable. However, the question is, can it be done given the political reality in Jharkhand and Chattisgarh? Even relatively advanced states with Naxal presence, such as Andhra Pradesh and Karnataka - one ruled by the Congress and the other by the BJP - are rocked by political dissidence based on mining-related money power.

The Centre cannot step in easily, as some would suggest, in light of the federal structure. In case stepping in is compelled by the war, the federal pillar of polity will be easily eclipsed. Mineral wealth and development are issues not only in adivasi lands, but in the corridors of organised state power too. A politically hobbled administrative structure whose inadequacy has caused the tribal backlash in first place, is being expected to further development on a war footing. Even if assuming the Infantry was available to roll back the Maoists, the governance prong would lag behind.

Since the strategy is wishful, what is the answer? Since Subrahmanyam's strategy cannot be operationalised on all three counts, the aim he suggests also needs jettisoning. The mineral wealth of Central India can remain untapped till the people there acquire the capacity to negotiate the terms for its use. This may take a generation, but it will protect the people from the known consequences of the ongoing war. Equally importantly, this may also shield India from the unforeseen consequences of triumph - by either left wing extremists, or the right-wingers who would seek to demolish them.

The cost of a couple of percentile points of the growth rate is a price worth paying to avoid India's Red Indian moment.

TIGER SANCTUARY : Are tigers back at the Buxa reserve?
MORE ARTICLES
on similar topics ...
FIRDAUS AHMED