When a woman conducts the Nikah

On 12 August 2008, history was made. A woman performed the duties of a 'qazi'. Today, a new 'nikahnama' has been placed before the 'ummah' (community), which protects the rights of the Muslim women, writes Syeda Hameed.
30 August 2008 -

New Delhi, (WFS) - I was taken by complete surprise when my friend, Naish Hasan, called me one day. "I want to give you good news. I am getting married. And I have decided that you will perform my 'nikah' (Muslim marriage ceremony)," she said. I have known Naish for several years for her activism on women's issues. Her request was unexpected. I had never thought that I would one day be a 'qazi'. 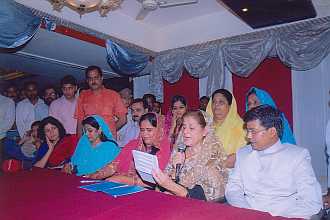 The bridal couple with Dr Syeda Hameed and some of the witnesses. Pic: WFS.

At my own 'nikah' there had been a male 'qazi' who, interestingly, also performed my son's 'nikah' 25 years later. I did not question the fact that my 'qazi' was a man but I always questioned my 'nikahnama' (marriage certificate) - a 'kora kagaz' (blank paper) in terms of the blandness of its content. I often asked myself why the conditions of marriage and divorce were not specified in it?

So I readily agreed.

I am sure I was not the first woman to perform a 'nikah' in the Islamic world. During the days of pristine Islam, when there were women 'muftis', 'qaris' (recitors of the Qur'an), and 'muhaddassin' (experts in Hadith i.e. sayings of the Prophet) there must have been women 'qazis'; but there is no historical record to prove or disprove their existence. The one inexorable fact is that with the revelation of Islam came women's empowerment in every sense - marriage, property, business and matters of religion. It is a tragedy that a religion, which spoke of women as equals of men in every respect, has come to be regarded as suppressive and dismissive of women.

I come from a family of religious scholars and reformists. Among the social reforms they propagated was giving status and dignity to women within the context of Islam and the Shariat (Islamic law). My most illustrious ancestor was a man whose name one hundred years ago was known in every Muslim household. Maulana Altaf Husain Hali's immortal work was a long poem 'Musaddas-e-Hali' (also called 'Ebb and Tide in Islam').

I looked through the 'Qur'an' for injunctions pertaining to marriage and anything inimical to a woman performing the ceremony. I found nothing.

•  Islamic elegies for social justice
•  Moving beyond the Qur\'an

His other landmark works 'Chup ki Daad' ('In Praise of the Silent') and 'Munajaat-e-Bewa' ('Lament of the Widow'), on the status of women, decry patriarchy, lambast society for the plight of the widow and extol women for their hard work and superior intelligence. He is India's first feminist poet. Inspired by him and with the help of scholars like Dr Sughra Mehdi, former Professor of Urdu, Jamia Millia Islamia University, I helped found the Muslim Women's Forum in the year 2000.

Before I agreed to perform Naish and Imraan's 'nikah', I looked through the 'Qur'an' for injunctions pertaining to marriage and anything inimical to a woman performing the ceremony. I found nothing. I then consulted a friend who I regard as the most erudite and learned Islamic scholar; he is a doctor by profession and at age 94 is more intelligent and aware than scholars half his age. He told me that of the four schools of Islamic jurisprudence, Hanafi, Hanbali, Shafei, Maleki or the fifth Fiqah Jafariya, there is nothing that says a woman couldn't perform a 'nikah'. "Show me one line in the 'Qur'an' and Hadith, which says that the 'qazi' should be a man," he challenged.

I knew that the only requirement for an Islamic marriage was the presence of witnesses and the fixing of 'mehr'. What I did not know then was that the presence of a 'qazi' is not an essential requirement. Since Islamic marriage is a civil contract, the man and woman can enter into it like any contract involving give and take, promise and performance. They can do it themselves as long as they do so according to the civil laws of contract. They must, however, have witnesses present from both sides.

Naish and Imraan had four women Sabira, Zakia, Noorjahan and Naaz, as witnesses in place of the mandatory two male witnesses enjoined in the 'Qur'an'. They also had one man, Nayyar Raza, as witness. Their 'nikahnama' had been prepared by the Bhartiya Muslim Mahila Andolan and unlike mine and 99 per cent of 'nikahnamas', this one stipulated many conditions of marriage most of them pertaining to protecting the interest of the woman and dignity of the man. Among them was a condition that Imraan would not 'enter into a second marriage during subsistence of this first marriage as monogamy is the stated ideal in the 'Qur'an'. These conditionalities were in keeping with Islam, which permits the two parties entering a 'nikah' to include in the marriage contract, any conditions they agree upon. 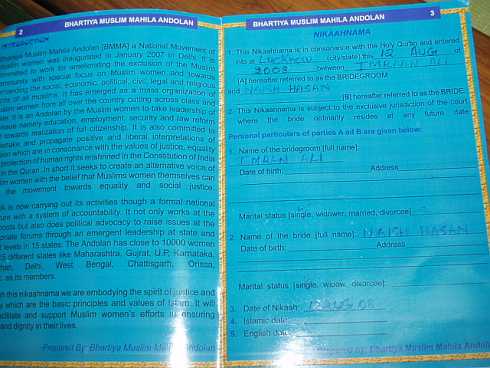 Copy of the nikahnama. Pic: WFS.

Islam requires the woman's 'mehr' to be agreed to at the time of marriage. 'Mehr' is the amount the man agrees as the woman's dower, which is payable immediately, but if deferred is compulsory payment in his lifetime. I have not known any man who paid 'mehr' at the time of marriage. When I announced the 'mehr', Imraan, the bridegroom, said he wanted to pay 'Mehr-e-Muwajjil' (immediate). The cheque was handed to the bride.

One more aspect of this 'nikah' was unusual; that a 'qazi' of the Shia sect performed the marriage of a couple of the Sunni sect. Frankly, it hadn't occurred to me that the Shia-Sunni question would come up in this context. In my family, Shia-Sunni marriages were common. My husband was a Sunni. Maulana Hali himself was a Sunni. My sister married a Sunni. In these cases, the 'nikah' was performed by either by a Sunni or a Shia 'qazi'. In my childhood, I saw Shias and Sunnis sit together during Moharrum to mourn the martyrdom of Hussain, grandson of the Prophet. In schools of Islamic jurisprudence there is nothing about the sect of the person performing the 'nikah'.

On 12 August 2008, history was made. A woman performed the duties of a 'qazi'. The media projected it before the world. Hard work by Muslim women's organisations, which have given due respect to the 'alims' (Muslim scholars), has resulted in most 'ulemas' (Muslim scholars) giving their seal of approval. Today, a new 'nikahnama' has been placed before the 'ummah' (community), which protects the rights of the Muslim women. Naish and Imraan are doubly blessed by Allah because they have become the instruments of restoring the true meaning of the 'Qur'an' and Islam. All the current hype about Islam being anti-women and a patriarchal religion is negated by the courage of the couple, their friends and Muslim women's groups in showing what is real and meaningful about women in Islam.

I feel humble that I was part of this moment. It was an idea for which the time had come. Let this be a small beginning of restoring the image of Islam, which has become blurred and distorted over decades of misinterpretation and mystification. (Women's Feature Service)

TIGER SANCTUARY : Are tigers back at the Buxa reserve?
MORE ARTICLES
on similar topics ...
CULTURE