Making news in the Northeast

What does it take to make news in these times of 24x7 media? If it's the Northeast, generally, it takes a major eruption of violence or a large-scale disaster. Ammu Joseph reflects on the silence in the media about recent events and issues in Manipur.
22 March 2009 -

Manipur made a brief appearance on the radar of at least some media in the rest of India around International Womens Day, when Irom Sharmila was released from custody (on 7 March), only to be re-arrested in less than 48 hours on the customary charge of attempted suicide.

Sharmila has been on an indefinite fast for over eight years, demanding an end to the imposition of the Armed Forces Special Powers Act, 1958, in her state. The controversial law (AFSPA), which gives sweeping powers to the military, has been in force in Manipur more or less continuously since 1980. This is despite long-standing popular opposition to it within the state and the recommendation in 2005 by a central government appointed committee chaired by Justice B P Jeevan Reddy that it be repealed. She has spent most of this period incarcerated in the security ward of the government-owned Jawaharlal Nehru hospital in Imphal (officially in the custody of the Central Jail, Sajiwa), being kept alive through force-feeding. 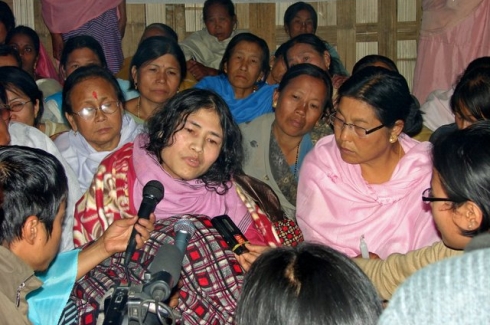 Irom Sharmila surrounded by Meira Paibis (Women Torch Bearers) after her short-lived release from custody on 7 March addressing the gathering, including nearly 60 members of the Network of Women in Media, India. Pic: Ammu Joseph.

Sharmila began her hunger strike in November 2000, after ten people were shot dead at a bus stop in Malom by soldiers of the Assam Rifles, a paramilitary force. She finally attracted some notice across the country in 2006 when, soon after her release from custody on 3 October, she managed to get to Delhi undetected  with the help of human rights activists from the state  in an effort to garner national attention for the cause.

Within days of shifting the site of her steadfast protest to Jantar Mantar, where she was joined by Manipuri students and other supporters, she was arrested by the Delhi police and shifted to the All-India Institute of Medical Sciences for urgent medical treatment. She spent five months in the capital under police watch, being fed through the nose in the Ram Manohar Lohia Hospital.

According to Babloo Loitongbam of Human Rights Alert, the highest per capita terrorist presence in the world is not in Afghanistan or Iraq but in Manipur, where the ratio of insurgents to citizens is estimated to be 1:100,000.

Sharmila returned to Manipur in March 2007 but was picked up by the police within a couple of hours and re-admitted to the J N Hospital. Since the term of her custody is a year at a time, she has been due for release in March ever since.

A number of women journalists from across the country happened to be in Imphal in early March this year, participating in the 7th annual meeting of the Network of Women in Media, India. We witnessed Sharmilas release from custody on the 7th after a three-hour vigil outside the hospital along with many of the Meira Paibis (Women Torch Bearers)  long-time, long-suffering, strong and determined women human rights activists  who had by then been on a relay hunger strike for 88 days in support of her struggle.

The experience of a television journalist attempting to get a go-ahead for a report pegged on the release from a news channel illustrates the general attitude of mainstream media to most events and issues in the northeastern region, especially if they do not involve a major eruption of violence or a large-scale disaster  the more the casualties the better the chances of coverage. Or, at least, dramatic action such as the naked protest by a dozen women against the custodial rape and killing of 32-year-old Thangjam Manorama by Assam Rifles personnel, which certainly made headlines across the country in 2004. In other words, the attitude is not significantly different from that of "First World" media covering the "Third World."

The channel, like most other mainland media, does not have a correspondent stationed in Manipur  so this was an opportunity to get some real-time news from a far-flung corner of the country without much effort or expense. But the initial response to her enthusiastic effort was: This happens every year -- so whats the story?

Lakme and other Fashion Weeks happen every year. Miss Indias and other beauty queens are crowned every year. Blue-chip companies announce their quarterly and annual results every year. Job placements happen in the IIMs every year. Cricket matches are played through the year with scarcely a break. Star-studded Bollywood films are released practically every week. The Sensex and Nifty go up and down every day and film stars romances wax and wane almost as regularly. The media cover all these happenings faithfully despite their invariably repetitive nature.

But a woman who is so serious about a political struggle (with widespread popular support in the state) that she is willing to sacrifice her life for it is not worth a mention merely because her short-lived respite from more than eight years of imprisonment occurs every year?

But obviously persistence sometimes pays and a short report was eventually aired late that night. However, a more detailed follow-up story on Sharmila against the backdrop of the prevailing situation in Manipur, which was finally sanctioned, ran into trouble with controversial bits edited out somewhere down the line. Again, thanks to more lobbying by the correspondent, the full report eventually made it to the airwaves, albeit belatedly, and not throughout the day.

What does it take to make news in these times of 24x7 media? The abduction and brutal killing of Dr Thingnam Kishan, a young Manipuri bureaucrat widely known and respected for his integrity and dedication to principles, whose battered body was discovered on 17 February along with those of two members of his staff (driver Aribam Rajen Sharma and chainman Yumnam Token Singh), barely caught the attention of the national media: one television channel ran a story several days later, a few newspapers carried reports (some, predictably, only in their northeast editions).

This is despite the fact that the political murders caused exceptional outrage among a wide range of citizens in Manipur and triggered spirited, sustained public protest across the state. Life was effectively paralysed for several days, with a 48-hour statewide general strike (bandh) called by a Joint Action Committee formed in the wake of the killings, followed by a government-imposed curfew, along with prohibitory orders, that continued uninterrupted for another 48 hours before it was gradually relaxed.

The protests continue and Kishan's young widow, Thingnam ongbi Romita, has refused the ex-gratia compensation of Rs.10 lakhs sanctioned by the state government, suggesting that they use the money to investigate the murders and bring the guilty to book.

The fact that none of us (journalists who closely monitor daily news in several newspapers and television channels) arriving in Imphal from other parts of the country on 4-5 March had any idea that a 12-hour curfew was in place at our destination  and had been for nearly two weeks  testifies to the virtual absence of the northeast in mainstream news coverage.

What does it take to make news in these terrorism-obsessed days? Human rights activists estimate that at least one or two people are killed in conflict-related violence in Manipur every day. This is despite the presence of 55,000 security forces in the state and the fact that the armed forces enjoy more or less unlimited power thanks to the AFSPA. The tally of approximately 35 conflict-related deaths in January 2009 is considered relatively low in view of the customary toll. Some 90 people are believed to have died in such violence since the beginning of the year. As senior Manipuri journalist Thounaojam Tarun Kumar asks, Why is the Indian media silent?

According to Babloo Loitongbam of Human Rights Alert, the highest per capita terrorist presence in the world is not in Afghanistan or Iraq or even Pakistan, but in Manipur, where the ratio of insurgents to citizens is estimated to be 1:100,000. Counting insurgents in Manipur is like counting stars, he says, and the deeper you look into non-state actors or underground groups (commonly referred to as UGs) the more their numbers grow. A recent question in the Legislative Assembly about the number of armed cadres among groups operating in the state reportedly yielded the figure of 12,000. Another startling statistic concerns the ratio of armed personnel to civilians, which is pegged at 35:100 in Manipur, compared to 1:100 in Myanmar (which is ruled by a military junta).

Why does none of this spark interest or concern in the rest of us and make news in the rest of our country? The people of Manipur are clearly caught between the rock of the military and the hard place of militancy. As Tarun Kumar puts it, The times are very challenging, especially from the perspective of newspapers. It is only the press that can bring things out and air them in public. I hope newspapers in Manipur can do that. That is the only hope. What will it take to make the media elsewhere in the country rise to the challenge and help fulfil that hope?

Ammu Joseph is an independent journalist and author based in Bangalore, and writing primarily on issues relating to gender, human development and the media.