It has been more than nine months since a political crisis has snowballed into a battle between the tribals and the non-tribals of Manipur creating sharp divisions. Ramesh Menon surveys the fragile situation.
14 June 2016 -

Living in Manipur for the last nine months has been not easy. Shortages of essential commodities, skyrocketing prices of fuel and cooking gas, frequent bandhs, curfews and clashes have paralysed normal life in the north-eastern state. Strife is not new to Manipur but its descent into chaos has left its people angry and sceptical.  As normal life is paralysed, residents wonder when it is going to end.

It all started when three controversial bills were passed by the Okram Ibobi Singh government in August last year, inflaming passions amongst the tribals who reside in the hills of the picturesque state and the Meities who live around the Imphal valley.
It triggered violent protests, killing nine people and injuring many others. Strangely it triggered off feelings of insecurity both among the warring tribals and Meiteis who feel that they will get marginalised.

Tribals who are mainly Nagas and Kukis constitute 57 per cent of the population. Four tribal MLA’s quit in protest against the bills putting pressure on the others to follow suit.

Though nine months have flown past, their bodies of the nine who were dead are still lying in the morgue as their mothers refuse to allow their burial. The agitating tribals say that the burial will not take place till the issue is resolved.

L Dikho, the former MLA of Mao constituency said: “The parents of those who died have taken the stand that since they died for the cause of the tribals, their bodies will not be buried till their demands are met.”

What is it that makes these bills so contentious

The first bill, Manipur People’s Protection Bill, defines Manipuris as those whose names appear in the 1951 Census or the National Register of Citizens with 1951 as the cut-off year. The tribals fear that they would be excluded as most of these areas were inaccessible at that point of time and documentation was very poor. They fear losing the land their parents or grandparents left behind just because of unavailability of records. 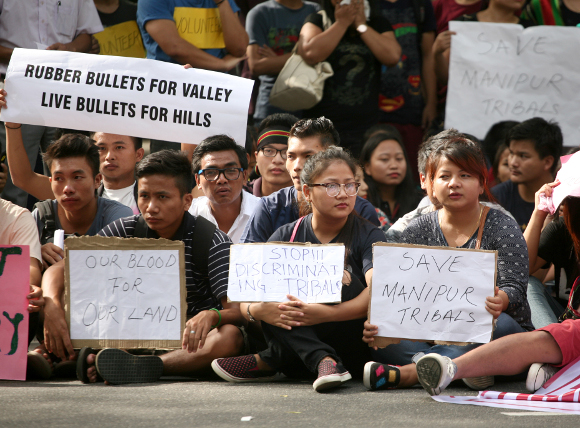 Political scientist Dr Nehginpao Kipgen, who is an assistant professor at OP Jindal Global University, Sonipat, told India Together: “As Manipur attained statehood only in 1972, there is a possibility that many of the local people may be listed as outsiders because of their inability to provide the required documents. There is also an apprehension that the definition of ‘Manipur People’ could be used in other Acts and Bills to deny services, facilities and amenities to people, especially the tribals, in seeking government jobs, admission to schools and colleges and in medical and engineering admissions where they have a quota.”

The second bill, the Manipur Land Revenue and Land Reforms Bill (Seventh Amendment), tribals fear is in direct violation of Section 371C of the Indian constitution which prohibits purchase of tribal land by non-tribals. “If we lose our land, we will have nothing to hold on to as we are mostly into agriculture,” said Veilou Veino, a member of the Manipur Tribal Forum in Delhi.

The third bill, the Manipur Shops and Establishments (Second Amendment), is also feared as it will allow expansion of business in tribal areas. This will bring in outsiders to establish shops and after a few years, they will call the shots because of their money power.

Lakpachui Siro, spokesperson of the Manipur Tribals’ Forum told India Together: “We are not over-reacting as these fears are real. We have seen what has happened to the tribals of Tripura who are today in a minority and have been completely sidelined.” Added Awangbow Newmei, president, Nagaland Peoples Front: “We strongly oppose the passing of these three bills as they violate the procedures and conduct of business rules of the Manipur state assembly.”

To someone from mainland India, it sounds like a complicated issue. To understand it, one needs to look at the typography, history and geography of the state. Those who live in the valley are mainly Meiteis who today dominate its social, cultural and political life. In the hills around the valley are the Naga and Kuki tribals in the districts of Ukhrul, Churachandpur, Tamenglong, Chandel and Senapati. 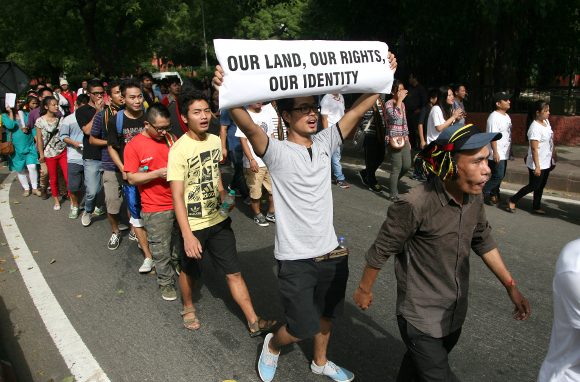 Though the valley constitutes only 10 percent of Manipur, it supports 60 percent of its population, while the hills form 90 percent of the state. As many as 34 tribes live in the hills overlooking the valley. Pradip Phanjoubam, editor of Imphal Free Press points out: “There is an apprehension among the hill people that their rights will be encroached and that their migration from the hills to the valley will now come under scrutiny.”

One of the serious charges of The Manipur Tribals’ Forum is that that the Hill Areas Committee comprising of all tribal MLAs set up under Article 371C of the constitution to protect tribal interests was not consulted before the bills were drafted. Its concurrence is mandatory for all legislations affecting tribal areas.

L Lam Khan Piang, Assistant Professor of sociology at Jawaharlal Nehru University, told India Legal: “The Manipur Legislative Assembly (Hill Area Committee) order 1972 was constituted for the safeguard and protection of tribals. It clearly specified that any bill other than a money bill has to be referred to the committee. As it was not done, the procedural lapses can be challenged in court.”

The formation of these three bills started when there was a demand by the Meiteis in the valley to introduce a permit for any outsider wanting to visit the state. It is called the Inner Line Permit and is granted by the state government.

Anyone residing outside the state who is not a native will need it to enter Manipur. Such a permit already exists in Nagaland, Mizoram and Arunachal Pradesh. This was introduced after Independence to ensure that the hill states were protected. The idea was to prevent non-tribals from settling there and disturbing the fragile demography. Basically, the Inner Line Permit is an official and obligatory travel document issued by the government of India to allow inward travel of an Indian citizen into a protected area for a limited period. The document is an effort by the government to also regulate movement to certain areas located near the international border of India.

Pandering to this demand, these three bills were passed. Those living in the hills say that as they are protected by the constitution which bars non-tribals from buying land or settling there, they do not need an Inner Line Permit. The Manipur government’s stand is that these bills were designed to protect the people of Manipur. The tribals say it is ultimately designed to help the Meiteis. “Look at who controls the economy, business, education, politics, journalism and everything else. It is the Meiteis. The only thing they have no control over is the land and now they are eyeing that too,” said Siro.

Author Dr Malem Ningthouja who has written books on issues in Manipur and a former fellow at the Indian Institute of Advanced Studies, said: “None of the three bills are pro-people as they do not protect the interests of Manipuris. What we are seeing today is reactionary politics. The Nagas, Kukis and Meiteis are taking to sectarian positions. Elite political forces are misleading the people in the valley and the hills while the progressive forces have become a silent minority.”

The day the bills were passed, protesters, mainly from tribal organizations from the hills, torched five houses belonging to Congress legislators. Among them were the dwellings of Health and Family Welfare Minister Phungzathang Tonsing and Lok Sabha member from Outer Manipur Thangso Baite.

The agitation is being taken seriously as assembly elections are due in another year. The state government just does not know what to do. If it scraps the bills, the Meiteis would go against them. If they do not, the tribals will be out to take their revenge during the polls. Four tribal MLAs of the Naga People’s Front, Victor Nunglung, Dr Alexander Pao, Samuel Risom and Losii Dikho have resigned in protest, saying that the interests of the tribals have been compromised. “Those who have not resigned have not had the courage to visit their constituencies,” said Siro.

Kipgen who authored a book on the politics and ethnic conflict in Manipur, said: “The tribal people’s short-term demand is withdrawal of the three bills and the protection of their land through constitutional safeguards such as the Sixth Schedule provisions. And the long-term demand is a separate administration from Manipur which they believe is the only way forward to bring lasting peace and development in their region.”

Representatives of the Manipur Tribals Forum recently met both President Pranab Mukherjee and home minister Rajnath Singh to plead their case. Both gave them a patient hearing. Though the bills have been passed by the assembly, the president has not yet given his assent.

Sources said that a lot of money has poured into the state to fuel the agitation as national political parties are interested in exploiting the situation before the assembly elections next year. It is one of the disturbing realities that is now rocking the state.

Ramesh Menon is the managing editor of India Legal and a recipient of the Ramnath Goenka Award for Excellence in Journalism.