More and more women in Tripura are participating in NREGA works, ensuring success of the scheme. The challenge lies in involving the menfolk too and implementing NREGA in insurgency-hit regions. Ratna Bharali Talukdar reports.
30 June 2008 -

The earthen road that connects Doctors Tilla area of Purba Barjala gram panchayat to Mandai main road in Jirania block of West Tripura district, constructed under the National Rural Employment Guarantee Act (NREGA), was completed in August last year. The one kilometre long road has provided the villagers, mostly the womenfolk, immense satisfaction, not only because that they now need not walk a long distance to reach the market area, but because the construction of the road gave them an opportunity to earn.

The brick soling of the road is likely start in this year for which they are now eagerly waiting. The construction work involving a total cost of Rs.73,800 started on 15 July last year, generated 1230 person days in the village, and was completed within one and half months. For the women engaged in the work, mostly belonging to the Bengali community, this provided extra earnings for their families. In fact, ever since the NREGA schemes have been implemented in their locality, they have been able to augment their family income. The male folk of the village move to nearby towns in search of jobs, where they can earn between Rs.120 to Rs.150 per day on an average. Lack of job opportunities for women in the area has made them remain at home. In such a situation, the NREGA projects have provided relief. 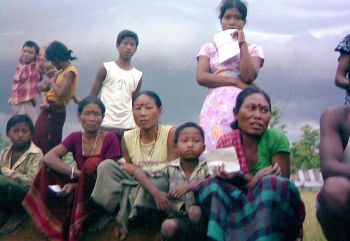 If NREGA schemes are meant for enhancement of family income for women in Purba Barjala village, for the tribal women belonging to Tripuri tribe in Chargharia, a village under the Tripura Tribal Areas Autonomous District Council (TTAADC), earning under NREGA project is crucial for their living. These landless tribals have no means of livelihood except depending on daily wage earnings in nearby town or in brick-making industries, which is not ensured everyday.

There is no work available for women. The two kilometre road construction work under NREGA gave us the opportunity to work and earn something. But it was completed before the state assembly election. After the election, we are looking forward to more jobs under the scheme, said Piranjay Debbarma, a senior woman of the village.

Be it for an increase in the family income or a crucial tool for living, Tripura engages a substantial number of women in NREGA projects as compared to other northeastern states. In some pockets like Jirania and Dukli blocks, participation of women in NREGA works is amazing. In Dukli Gram Sabha of Dukli Block, 10 km away from the capital city Agartala, percentage of women engaged in NREGA schemes has goes up to 70 to 80 per cent, says S R Choudhury, the Block Development Officer.

This is because NREGA works fetch a relatively low wage  about Rs. 85 per day. Because of this, menfolk show little interest in these works. The daily wage, even for unskilled work, is much higher. For skilled jobs, the men get as much as Rs. 200 per day, the BDO says.

The Minister for Rural Development, Jitendra Choudhury, while acknowledging that the high women participation in NREGA schemes is a very positive aspect, adds that as the left-front government of the state has been able to ensure substantial job opportunities for the male folk in rural pockets, women have come forward to take part in NREGA works. Also, the state has moved for multi-cropping agriculture practices instead of traditional single cropping, which also keeps the men busy in fields, giving women more opportunities to avail of NREGA facilities. In Tripura, in the non-tribal segment, the agriculture practice is an all-male activity.

Ensuring person days is not the sole objective of Tripura model of NREGA implementation. Our thrust also rests on creation of permanent assets in the state, says Brijesh Pandey, Secretary, Rural Development.

•  They lock on to the NREGA
•  In Orissa, NREGA is still a ray of hope

Another reason is, perhaps, women feel safe at the work place in a better socio-economic environment, the minister adds. Stating that participation of women is highly encouraging he says that it would definitely give rural economy a boost in the near future.

A state progress report of NREGA activities has recorded percentage of person days for women as 44.51, which is higher than the national average of 42.52. The state has the highest record so far in terms of employing women in NREGA projects amongst the northeastern states. In some of the major tribal states, percentage of employment for women are: Arunachal Pradesh - 29.58, Nagaland -29.36 and Mijoram  36.62. In matrilineal Meghalaya, it is only 30.87 while Assam records 30.85 women employment and Manipur records 32.80.

The department of rural development records generation of person-days as 181.04 lakh, with creation of an average 38.86 person-days per family in 2007-08. The state recorded issuing of 4,65,779 job cards for the year 2007-08 in three districts including West Tripura, South Tripura and Dhalai. While Dhalai was the first to be selected for the NREGA projects in 2006-07, West and South Tripura were selected in 2007-08. The North district has been selected only in 2008-09, and works are yet to be implemented.

Percentage of person-days for scheduled tribes that constitute 31 per cent of the total population was 41.95 during the year. In Dhalai district, 76.03 person-days per family have been generated in 2007-08.

Taking the Dhalai district experience, the first NREGA district in our state into account, we are expecting generation of more person-days in 2008-09 in West and South districts also. Normally it takes some time in planning during the first year. Implementation process shows good results only from the second year after selection of the district for NREGA scheme, says Brijesh Pandey, secretary, rural development. Even in South district, the department could generate 100 person-days for 216 families in very first year of NREGA implementation, he says. The NREGA manual ensures 100 days job-guarantee to all families identified for NREGA schemes.

One of the objectives of NREGA implementation projects in Tripura is creation of permanent assets by construction of road infrastructures. In Jirania Block for instance, out of the 33 NREGA projects for 2007-08, 14 were brick soling road construction projects.

The state records construction of 6,716 kilometres of road under NREGA projects in 2007-08. In Dhalai, another 962.66 kilometres have been constructed during that year. Justifying the major thrust on road construction, the minister says that while road construction is a permanent asset building process aimed at accelerating developmental activities at grassroots, the state government has set a target that every hamlet having a population of 250 will be covered with a blacktopping road within next two years.

Ensuring person days is not the sole objective of Tripura model of NREGA implementation. Our thrust also rests on creation of permanent assets in the state, Pandey says.

Apart from the road construction schemes, other projects that have a priority in NREGA schemes include water conservation and water harvesting, micro-irrigation works, renovation of traditional water-bodies, fisheries, land development, flood control and protection, culverts and RCC bridges.

In terms of performance of NREGA implementation, Tripura ranks second in the country. The record of other northeastern states as regards their performance: Mizoram  fifth in the country, Manipur  seventh, Assam  thirteenth, Meghalaya  eighteenth, Arunachal  nineteenth and Nagaland  twentieth. The ranking parameters include transparency, accountability, vigilance, monitoring, evaluation, physical performance indicator, financial performance indicator, staffing, training and others, according to NREGA guidelines. 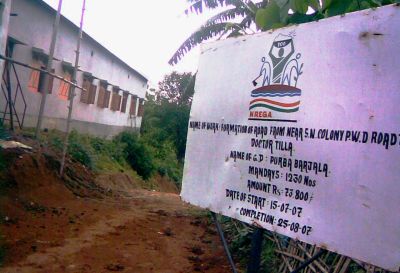 BDO Coudhury says that the registration of families identified for job cards is done meticulously involving panchayat people and government officials in every pocket. The most laborious part is the registrationidentifying right person for the job card. The job card bears the photograph of the beneficiary, and it remains with him or her. Apart from engaging the Panchayat Raj Institution (PRI), a group of people is engaged to draw outline of every project, according to requirement of the respective localities. In TTAADC areas, there are Block Advisory Committees to ensure sanction of the projects. A strong vigilance is there to monitor that each and every guideline of NREGA is followed.

The total expenditure incurred for NREGA works in the state during the year 2007-08 is 162.74 Crore. The minister for rural development envisages enhancement of wages within a very short time. In 2006-07, we started the wage at Rs. 55 in Dhalai district. This has been increased to Rs.85 per day per person during 2007-08, he says.

Implementation of schemes under NREGA is crucial to provide job opportunities to rural poor of Tripura as the state has a huge 66.67 per cent people still living below poverty line, according to state government sources. While the state economy still rests on agriculture and agriculture related activities, there is tremendous pressure of population on its soil. About 90 per cent of the farmers are poor and marginal and the average land holding size is only 0.97 hectare. With this small land holding, most of the rural poor have to opt for daily-wage earning sources all throughout the year. In such a situation, proper implementation of NREGA scheme can be instrumental in providing jobs to rural people.

While NREGA implementation of the state has gained significant achievements, many job card holders have alleged that although payment against their work is ensured, it takes prolonged period to get money after the work is completed. In Dukil Gram Sabha, some women who were engaged in fishery development project have alleged that they have not received payments for the previous NREGA job.

Monmohini Debnath, the pradhan of the panchayat too says that to maintain all formalities to ensure transparency of the project work, the job card holders have to face lot of difficulties. Only 50 percent of the total project cost is disbursed through gram sabhas, the remaining 50 per cent is disbursed through block and district level PRI. The money is released only after submission of the completion report of every project, which is a relatively long process. The workers hardly have the patience or can ill afford to wait so long for payments.

Choudhury too says that to ensure transparency, payment for NREGA projects is not made in cash and is deposited in workers bank accounts. In this way, every job card holder has to have an account in nearby financial institutions. This often leads to complications and delay in the payment process. But the linkage to the financial institutions has ensured that no one is discriminated, even if there is a delay during the process, he adds.

The secretary of rural development identifies two more problems that hinder the success of NREGA implementation: implementing projects in insurgency hit areas and motivating the men to engage in these projects.

Ratna Bharali Talukdar is a freelance journalist based in Guwahati, Assam. She received the Chameli Devi Jain Award for Outstanding Women Media Person and the Ramnath Goenka Excellence in Journalism Award in 2005 and 2006 respectively. This article has been produced as part of a study facilitated by a grant under the TATA-RGVN Senior fellowship programme.