India claims that Pakistan is stockpiling more nuclear weapons than it needs for minimum deterrence. But this could just turn out to be an excuse for it to do likewise, writes Firdaus Ahmed.
07 September 2009 -

Earlier this year, at the end of a book release function, India's Army chief General Deepak Kapoor was asked about developments in Pakistan's nuclear capability which were recounted in the US Congressional Research Services Report. In response, he remarked, "They require a certain minimum amount (nuclear capability), but ... Pakistan's attempts to increase the number of its nuclear weapons is a matter of serious concern."

Later, in early September Gen. Kapoor repeated this view when accosted by the press during his visit to the army's Artificial Limb Centre in Pune, for his opinion on the Federation of Atomic Scientists' report that Pakistan is increasing its warhead haul to 70-90, he said, "There is a difference between having a degree of deterrence, which is required for protection, and going beyond that. If the news reports of (Pakistan) having 70 to 90 atomic bombs are correct, then I think they are going well beyond the requirement of deterrence."

What does this mean? One media commentary appearing in the Times of India on the second statement of the Chief offers that "Kapoor's implied suggestion [is] that India could have to revisit its no-first use policy", quoting analysts Brahma Chellaney and Bharat Karnad of the Center for Policy Research. The report revisits the recent controversy over whether the thermonuclear tests at Pokhran by the Vajpayee government 'fizzled', arguing that "the Indian nuclear arsenal needs refurbishing, if not the need to carry out more tests, to maintain its nuclear programme's cutting edge." Clearly, the favourite hobby horses of players in the nuclear field have been hitched to Kapoor's remarks, though he himself has not implied anything of the sort.

The general's remakes are significant, since he is also now the Chairman of the Chiefs of Staff Committee. In this role, he oversees the Strategic Forces Command, responsible for the nuclear arsenal. On both occasions, the Chief was engaged in a function unrelated to the nuclear issue. The earlier remark can be taken as his preliminary observation. Charged with safe-custody of India's national security, he cannot be expected to say that nuclear developments in India's neighbourhood are not of concern! However, the second time round, we must presume that he is voicing the considered opinion of the government.

Understanding exactly what he meant, therefore, is necessary in order to dispel the spin self-interested forces with a nuclear agenda are using the media for.

A cycle of numbers

Firstly, India cannot second-guess Pakistan. Since the number of nuclear weapons that India possesses is also not well known, Pakistan would naturally make an educated guess, and react accordingly. If the guess is too high (say, for example, the Pakistanis decide to play safe and assume that India has a lot more nukes that we actually do) then they would correspondingly build up a high arsenal too. India may react to this by declaring that Pakistan does not need so many weapons, but that would not hold any water, since it would be dismissed as a natural thing for any Indian chief to say. If India feels Pakistan as going beyond a certain limit, then India should engage Pakistan in a discussion on nuclear matters. A certain degree of transparency among nuclear powers, locked in a conflictual relationship, would be prudent. 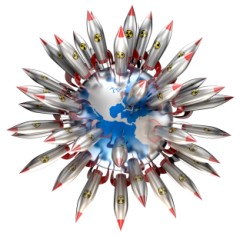 The Chief's remarks only serve to hyphenate India to Pakistan yet again, something we have tried hard to overcome in the international arena for decades.

Both countries consider the 'minimum' of their 'credible minimum deterrence' to be a dynamic, security-situation related number. There is no easy way for either side to fix this requirement, or for the other to know it reliably. As a result, there is always a dynamic that pushes both nations towards endless build-ups.

Secondly, we must examine India's purpose. The Chief had earlier said, "I think the world community should put the kind of pressure which is required on Pakistan to cap the enhancement of their nuclear capability." It appears that there is an incipient arms race in the region, and India's real objective is to ensure that Pakistan remains a step behind India in developing its capabilities. It is noteworthy that Pakistan has stalled talks in the Geneva-based Conference on Disarmament (which is considering introducing the Fissile Material Cut Off Treaty) by citing its national security concerns.

Moreover, India will peg its numbers by looking at both Pakistan and China. I.e. we are wont to ask, "how many nuclear warheads would be needed in the event of a simultaneous confrontation on both borders?" The answer, whatever the number, is that it will be higher than what is needed to deal with the Pakistani threat alone. But such a higher stockpile can be perceived by Pakistan as giving India the ability for a disarming first strike, which can only be thwarted by a stabilising second strike capability, for which even more nukes would be needed. A perpetual cycle of nuclearisation is thus well entrenched by the logic of both sides. Indeed, already there are suggestions that India's arsenal should be pegged at about 200 warheads.

And at any rate, given that India is itself buttressing its second strike capability by the recent launch of the INS Arihant, there could be no objections to Pakistan doing likewise. Doing so, as the Chief has done, only serves to hyphenate India to Pakistan yet again, something we have tried hard to overcome in the international arena for decades.

The suggestion that increase in Pakistan's arsenal requires reconsideration of India's NFU pledge is untenable. Since by reaching 90 warheads or thereabouts, Pakistan still does not gain first strike capability, there is no cause to revisit the pledge. Rescinding it carries the danger of what Schelling called 'the reciprocal fear of a surprise attack' or an avoidable tendency toward pre-emption.

The 'need' to test

The timing of the other controversy - over whether India needs to test again - is suggestive. India had earlier been prepared to accede to the Comprehensive Test Ban Treaty, but the treaty itself had been stalled by the US Senate not ratifying it. Now, with the possibility of the US championing it once again after a decade-long hiatus, we are beginning to hear voices in India which would prefer that India maintain its option to test. The position of those wanting further tests is that India does not have the requisite computing power to go ahead with arsenal development without testing.

Even if this is true with respect to the hydrogen bomb, deterrence is not necessarily a function of a thermonuclear capability when merely a fission or boosted fission based arsenal can serve the same purpose adequately. H-bombs on the other hand lend themselves to city-busting, a prospect best avoided if deterrence were ever to break down. Thermonuclear weapons have other advantages, such as 'more bang for the buck' and being lighter payloads that are easier to deliver. This technological advance led to the doctrines that eventuated in the Mutually Assured Deterrence arsenals of the superpowers. There is no call to replicate the cold war experience in Southern Asia.

Thus, while every development in the nuclear plane is indeed a cause for concern, the manner such concerns are appropriated by interested constituencies and the way these manipulate the media, has been starkly witnessed in the latest nuclear episode. Their inner motives must be revealed so that public opinion exercises a check over politicians, who neither know nor care enough to ward off such pressures.