What do you for water when you are a paddy cultivator and a good portion of the hills around you are rocky outcrops, not ideal for catchment? Enter the kokkarni. Shree Padre reports on the revival of the practice in Palakkad, Kerala.
12 April 2009 -

Paddy is the main crop of Padayetti hamlet in Erimayoor village of Palakkad district, Kerala. The hamlet comprises of 69 families and has about 100 acres under paddy. It was in August last year Kerala State Bio-diversity Board and Thanal, a Trivandrum based voluntary organisation has initiated a three-year project of agro-biodiversity restoration and organic village here.

These fields are situated in the valley sandwiched between hills. Houses are slightly far away from the fields, located a little above the paddy fields. The average rainfall is 1200 mm, and comes from the southwest monsoon. thula varsham, the northeast monsoon, unlike other parts of Kerala, is negligible here.

Under rain fed condition, these farmers are taking two crops. The second crop in considerable portion is always under the threat of drought. Canal water from Malampuzha dam passes by the side of the village. By the end of January, that also stops. Farmers of about 25 acres of paddy fields lying in lower level and closer to the canal somehow manage to give protective irrigation using the canal water. 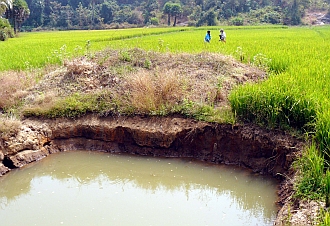 A kokkarni dug in this decade in individual paddy field. Pic: Shree Padre.

But this water cant be pumped for long distances. In the upper elevations, farmers losing crop as a result of 2-3 weeks moisture stress is common. For drinking water, the hamlet depends on open wells. There are some public and a few private wells. Open wells drying by February-March is a common phenomenon here. Bout ten houses have dug bore wells too.

A good portion of the hills are rocky outcrops. A careful study shows that wherever catchments of paddy fields dont have good topsoil and only bare rocks, such fields get scorched. Interestingly, some farmers have small pond, locally called as kokkarni that provides water for one or two protective irrigations. Those who have kokkarnis in their fields somehow manage to hire a pump set, provide one or two irrigations and to save the crop.

Kokkarni is nothing but a farm pond or percolation pond. Generally, it is smaller than an earthen tank  kulam and is bigger than an open well. In its function, it can be compared to thalakulam. Recalls elderly farmer Jabbar: Our ancestors had dug more than a dozen such Kokkarnis at higher elevations. These were done by our predecessors decades ago, even before the Malampuzha dam was constructed.

They werent drying up even in summer. Once the second crop is harvested in Feb-March, the kokkarnis were used for bathing too. They helped in retaining the moisture in the paddy fields situated below.

After a few awareness workshops, farmers at Padayetti are showing more interest in digging new kokkarnis and towards other drought proofing practices. Also, more than 50 percent of the area has been switched back to hundred percent organic farming.

What then went wrong? As the families went on partitioning, the lands were fragmented. There was more pressure on the lands. Cultivation of crops like tapioca spread to the catchments of kokkarnis as well. That spelled the death knell for the water bodies. The loosened soil started accumulating in them and now you wont find out the traces of these water bodies out ancestors have so painstakingly dug out.

About a decade ago, when the drought was severe, this farming community remembered their old kokkarnis. Using polklines, about a dozen farmers had had kokkarnis dug by the side of their individual fields. Jabbar himself had had dug two. It cost him around Rs.15,000 each. Since the soil type here is lose, it goes on collapsing from year to year. If these ponds have serve us for a decade, we have to construct stone wall lining inside it. This is very expensive, points out Jabbar. Three-four farmers at Padayetti have constructed such retaining walls. Planting rows of vetiver instead of stone walls just before monsoon, in the first season itself might be a cheaper and effective alternative.

Another advantage of kokkarni is that by way of slow percolation, it enhances the topsoil moisture and ground water levels. It is always more beneficial if such ponds can be dug at higher levels of respective catchment area. In Kodagu district of Karnataka, such structures were there above each familys paddy field. Of late people have forgotten its contribution to paddy fields and to the ground water aquifers. 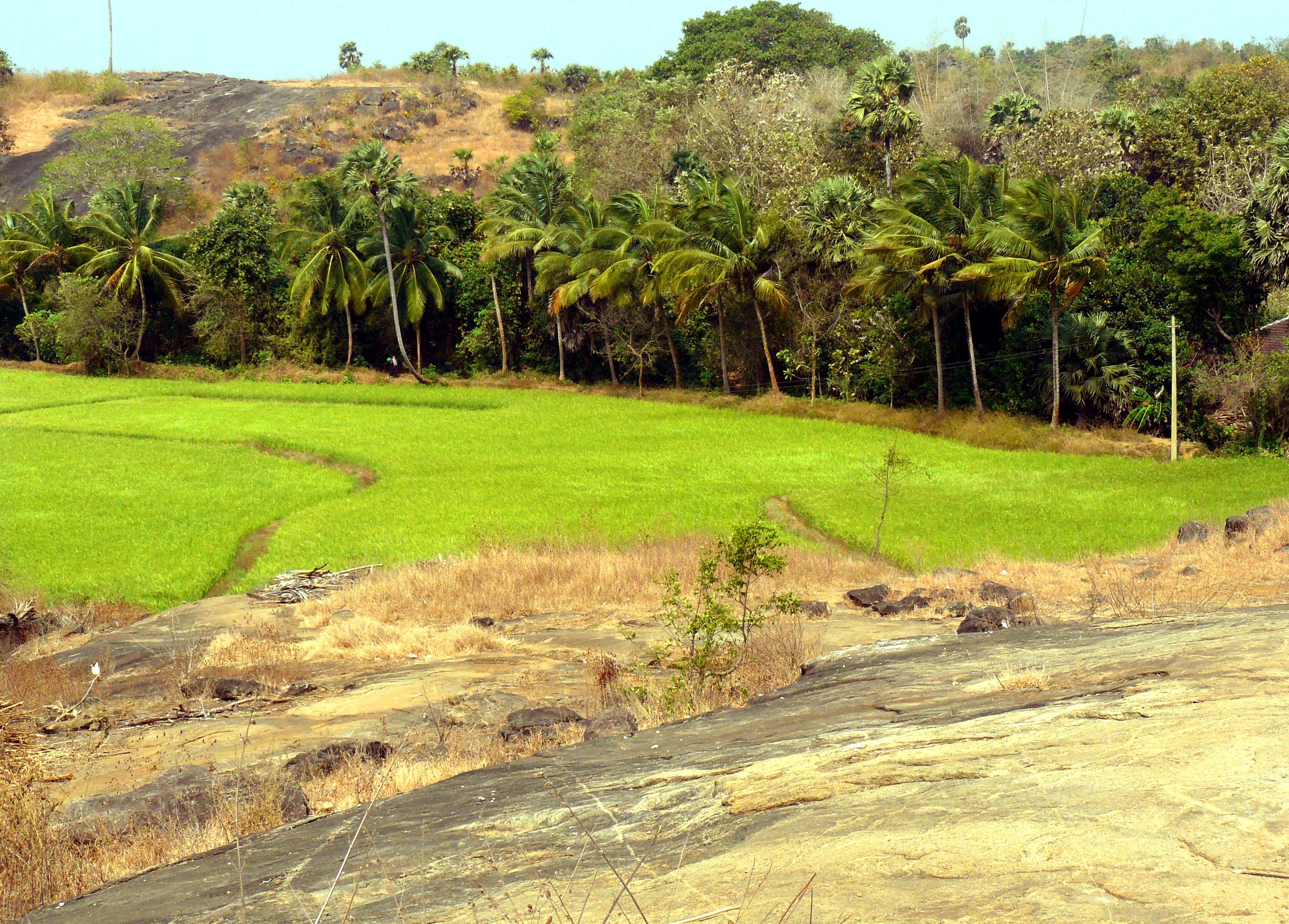 No moisture seepage from top. Catchment area on both sides is rocky. Pic: Shree Padre.

If the catchment is rocky, one has to dig the pond at the higher level of their plots so that the percolation benefit is passed on to the rest of the fields in the lower levels. If all the farmers dig a percolation pond like this, the cumulative effect would permit a legume crop like horse gram or black gram after the second harvest of paddy.

PRADAN (Professional Assistance for Development Action), a Bihar NGO has popularised a similar structure there which is called as five percent model. Explains Dinabandhu Karmakar, PRADAN Programme Director The idea was originally conceived to protect rain-fed paddy crops in Purulia district from September dry spells: commonly known as hathiyaa. The core idea of the 5% model of in-situ water harvesting is that every plot should have its own water-body, which should be able to hold rain water which otherwise flows out of the plot as run-off in rainy season during vegetative growth phase of the crop. The water held in the pits would irrigate the plots during water stress. The pit will also facilitate sub-surface flow of water to downstream plots and recharge moisture regime of the area as a whole.

At Padayetti, they are growing the traditional long duration  120 days  paddy even for the second crop. Switching over to short duration varieties and opting for SRI method will be two other possible solutions to drought proof the risk prone paddy fields. Already Thanal has successfully demonstrated the SRI method here in leased paddy fields where they are having the demonstration cultivation. 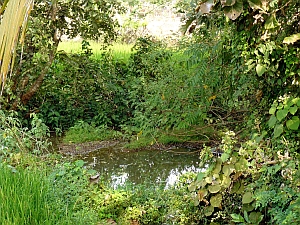 This kokkarni is almost refilled due to silting. Pic: Shree Padre.

Now, after a few awareness workshops, farmers at Padayetti are showing more interest in digging new kokkarnis and towards other drought proofing practices. Already more than 50 percent of the area has been switched back to hundred percent organic farming, claims S Usha, of the Kerala-based environmental NGO Thanal. About a dozen of houses have started producing vegetables in homestead garden sans any chemical inputs.

Slowly, but steadily, Padayetti is crawling back to its second independence. Who knows, in the years to come, Padayetti might have a few lessons for the other drought prone paddy fields of Palakkad. Nevertheless, a good part of that might be the renewal of he lessons from the past.