High Courts in India face case-loads that keep growing, and their responsibilities to oversee the functioning of lower courts are also significant. The reforms proposed to fix this have themselves been pending for long, notes the Foundation for Democratic Reforms.

High Courts, along with the Supreme Court, are the Constitutional Courts in India. They are constituted by, and derive authority directly from, the Constitution of India. High Courts are placed at the apex of the judicial pyramid in a state, and as such are entrusted with multiple responsibilities and an expansive jurisdiction, both original and appellate, over the territories over which their jurisdiction extends.

The Indian High Courts are facing a crisis of a great magnitude by virtue of their exploding dockets. The mounting arrears in these courts have only been worsening over the years, and is one of the greatest challenges to the judiciary today. Currently, there are over 5.6 million cases pending in the 25 High Courts across the country. About 20 per cent of these cases have been pending for more than a decade.

In addition to the pendency, the High Courts are also faced with a high vacancy in judicial strength. There are only 673 High Court judges currently, which means there are over 8,000 cases pending per judge in the High Courts. The unnaturally high caseload places undue pressure on the judges to dispose of cases at a faster rate, which will invariably affect the quality of adjudication. In fact, the disposal rate per judge in 2019 was an astonishing 3,500 cases! 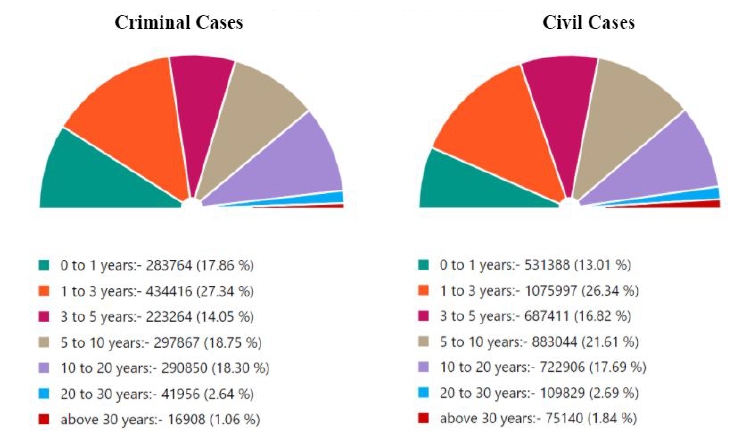 These courts are meant to be the sentinels of our Constitution, ensuring the protection of citizens liberties as well as dispensing effective civil and criminal justice delivery. Although entrusted with the authority to adjudicate on matters of constitutional importance, these courts are currently unduly burdened with appellate and revisional matters which account for 40 per cent of their caseload. The High Courts are also entrusted with supervision and administrative control of trial courts under Article 235, and such a heavy caseload and vast responsibilities mean that the High Court justices in India are probably the most overworked judges in the world. 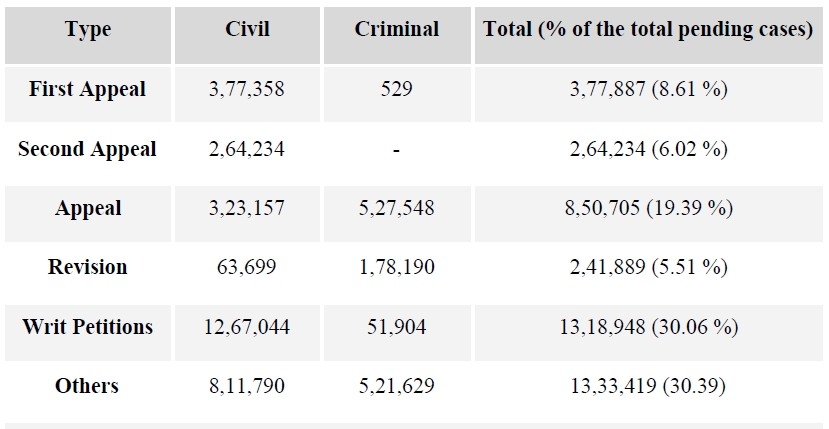 It is therefore critical that the functioning of the High Courts is immediately strengthened, the means for which have been enumerated in the past by several expert bodies. Broadly, four approaches, which are complementary to each other, need to be adopted.

1. Filling up vacancies in sanctioned strength of judges

The Indian High Courts are currently functioning at 60 per cent capacity, with the rest of the positions being vacant. This only exacerbates the burden on the dockets of each individual judge. These positions must be filled up on priority across the country.

2. Appointment of ad hoc judges under Article 224A of the Constitution

Article 224A of the Constitution provides for the appointment of retired High Court judges for the purpose of clearing the arrears in the High Court docket. This provision must be invoked at the earliest to appoint an adequate number of such judges in order to clear the existing arrears in cases, as was previously recommended in the 79th Report of the Law Commission of India (LCI).

In all major democracies, judges of the constitutional courts have a great support system in the form of intelligent, knowledgeable, highly motivated judicial clerks. Many of the judicial clerks grow in stature over time and become leading lawyers and judges themselves. In India, the judicial clerk system is in its infancy. Each Judge of the High Court should be allotted four judicial clerks carefully selected based purely on merit, hard work and motivation.

4. Limiting the jurisdiction of the High Court

This article is extracted from the Advocacy Paper of the Foundation for Democratic Reforms, titled 'Rule of Law for the 21st Century'. This advocacy paper was prepared in advance of a conference on reforms in rule of law institutions, held February 20-28 2021 by FDR, Bharti Institute of Public Policy, and University of Hyderabad. The full paper may be downloaded here.