The stilled waters of the river that always sustained them have now become polluted. Yet, this muddy river is their only source of drinking water, bringing with it illness and disease. Neeta Deshpande's concluding article in this series on uprootment and survival in the Narmada valley.
24 February 2010 -

Between the treacherous hills of the Vindhya and the bloated Narmada, Khajan Supa finds himself in a precarious fix. For the field and home that he has lost to the reservoir of the Sardar Sarovar dam, the Madhya Pradesh Government is legally obligated to resettle him on two hectares of farmland and a house plot. From his tiny Adivasi village of Anjanwada on the banks of the Narmada in south-western MP, Khajan has travelled as far as the corridors of power in Bhopal, Mumbai and Delhi, each time arming himself with a persistent hope for justice. But five years after he helplessly watched his own land drown, he is forced to live on the periphery of the reservoir, wondering if his designs for a new future are no more than an elusive dream.

In the meanwhile, danger lurks every moment, in every encounter with the river. When he bathes or fishes in the Narmada - only 200 metres below his hut - Khajan fears that he might lose his grip on the flank of the hill, part of which is now engulfed by the waters. When his wife Binda approaches the river to fill her pots, she must watch out for crocodiles which have increased in numbers, trapped by the dam. The couple must also live with the unrelenting anxiety that little children in their family might get stuck in the high silt deposited on the reservoir's banks.

The stilled waters of the river that always sustained them have now become polluted. Yet, this muddy river is their only source of drinking water, bringing with it illness and disease. Crossing it - to go to the market, meet relatives or visit a doctor - is impossible without a motor boat: not always available and rarely affordable. To save their hut from the rising waters, some six years ago the couple was forced to move it higher up on the hill: a steeper area which is difficult to traverse for their livestock. But despite such tragic circumstances, they have no choice but to continue to live a hazardous life, waiting for the land that the Government has promised them.

In their journey of desperation, jeopardy is coupled with that most trying of conditions: extreme poverty. Before his titled land - 11.5 acres shared with five brothers - was submerged, Khajan's family grew a variety of crops: bajra, jowar, urad, tur, maize, groundnut, chillies and tobacco. They would barter the vegetables they grew for salt. They would earn enough to buy clothes. In addition to growing food grain for consumption, Khajan would also earn some cash. "A single crop would provide us food for an entire two years", he recalls wistfully.

After his land was swallowed by the waters in 2004, Khajan began to farm poorer land higher up on the hill. Even with good rains and fertiliser supplements, the harvest from this land can hardly feed his family for two months. He can't fish in the reservoir other than for his own needs, for want of a boat and equipment which he can't afford. Left with no other recourse, he is now forced to borrow, that dreaded last option without which his survival would be impossible. 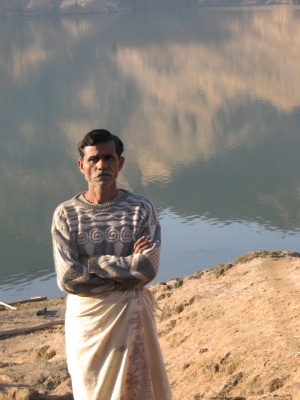 After his land was swallowed by the waters in 2004, Khajan began to farm poorer land higher up on the hill.

Long before the Sardar Sarovar ravaged his life, Khajan was already intimately acquainted with tribulation and injustice. Some three decades ago, before the appearance of the Khedut Majdoor Chetna Sanghat - an organization which fought against exploitation in the region - Khajan could never sit on the same wooden cot as visiting forest guards or police. If he didn't greet such visitors, he was insulted, abused, even slapped in the face. If he didn't meet their demands for meat, money and alcohol, he was beaten and forced to admit to crimes he didn't commit. Only with the dedicated work of the Khedut Majdoor Chetna Sanghat and the Narmada Bachao Andolan (NBA) over several years, did such exploitation come to a welcome end. Now we sit on the same khat as they do, says Khajan emphatically.

The exploitation, however, continued in an equally ugly avatar: corruption. When Khajan and his brothers wanted to partition their land, the patwari demanded a bribe. Khajan was forced to pay of the order of a thousand rupees of hard earned money in bribes over the next three years to two consecutive patwaris. The third time around, he employed a different strategy. After the new patwari refused him with swear words, Khajan approached the Revenue Inspector who was known to be a good man. This Revenue Inspector took the patwari to task, and Khajan soon received his land title without having to pay a single rupee. But of course, fear of action by the Khedut Majdoor Chetna Sanghat and the NBA also did the trick.

Little did Khajan know then, that the document he had struggled to obtain wouldn't save his land from a calamity beyond his imagination, portended by a seemingly harmless survey. When he was still unmarried, Government officials came to his village and promised to pay him a rupee for a day's work of carrying their equipment to a neighbouring village. He agreed, and on the way, enquired about the survey. The officials revealed that a dam would be built on the Narmada some day, and that the impeded river would rise up to submerge his hamlet. A bewildered Khajan refused to believe them. The Narmada is huge and flows rapidly, he said. It will break the dam and flow on! At the time, he had not the faintest idea that when the water would really rise, it would swallow his farm, his home, his entire zingi: his life.

Before the construction of the dam, the river was a source of great benefit for Khajan, providing him water and fish. His animals would drink from the Narmada. His family could bathe and swim at their convenience. And during the summer months, the river could be easily crossed by foot. Now it has become an ocean! he says ruefully. Now he has to fear the crocodiles every time he goes to the water. In a single week, a crocodile ate five of his goats. And the worst was yet to come.

Khajan's nephew Kamdar - a boy who hadn't reached his teens - was killed by a crocodile when he was bathing with other children. Khajan talks of this loss with a stoic face, his voice controlled and steady. But he can't deny that his nephew's death has left an indelible imprint on his mind. It has instilled in him a fear of the very river that once meant everything to him. 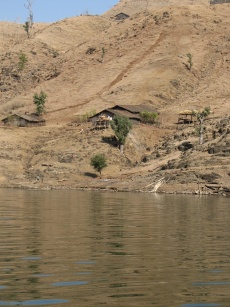 Khajan's hut on the periphery of the reservoir of the Sardar Sarovar dam.

Following years of dogged activism with the NBA, Khajan and others in his village were shown land in the Bharuch district of Gujarat by Government officials. But the salinity of the soil was so high that it would have prevented the growth of crops. So the villagers refused the land they had pinned their hopes on for years.

Around the same time, the Government allotted Khajan another piece of land in the village of Burkhedi, also in Gujarat. He had never even seen the land, leave alone selecting it. How then could the Government allot this land to him? he asks. According to the Narmada Water Disputes Tribunal (NWDT) Award, the land could be transferred to him only if he agreed to take it, he points out. His younger brother and his contacts in neighbouring villages informed him that the land in Burkhedi was poor: again, the salinity of the soil was high, the rains caused slush, and rainwater would enter house plots in the monsoons. So Khajan and others rejected this land as well. Families from another hamlet in their village have accepted land in Gujarat. They visit Anjanwada to recount experiences of rainwater flooding their houses and fields, another reason why Khajan will not move to Gujarat.

According to the NWDT Award, Khajan is entitled to be resettled in his own state of MP, a demand he has adhered to over the decades. But now, the Government is offering him money in lieu of land, in compete violation of the Award. For various reasons, Khajan and others in his village will not accept cash compensation. Can the Government guarantee that the money it provides will buy them land to compensate for their losses, they ask. When pressed for land-for-land in the past, Government officials claimed that there was no land available in MP. If the villagers found land, the officials promised to buy it.

The villagers soon travelled around the region in search of land. They found suitable land in Dhar district of MP. They gathered Government officials and NBA activists to visit the land. They met the landowners, who were willing to sell the land to the Government, and an agreement was thus reached. But till today, the Government has taken no steps to buy this land.

Until it does, Khajan and his family will continue to be stranded in a perilous existence on the banks of an arrested Narmada. With their past lost to a life of struggle and protest, and their present shrouded in poverty, they continue to soldier on to salvage their future from the imperatives of a flawed model of development. Even today, they tell their story with the same perseverance, courage and hope: a story of a large dam, a beautiful river, and an extraordinary people whose truth must be heeded.