15-year-old Raje was left home alone in Chennai on 17 January while her family attended the Sunday church. When they returned, it was to find she had hung herself from the living room fan. Krithika Ramalingam reports on Tamilnadu's growing suicide numbers in the 10-19 age group.
01 February 2005 -

For 15-year-old Raje Sabi, even a weekend from school was no respite. With model tests slated for the Monday, this Class X student was under pressure to excel academically. Sabi, who represented Tamilnadu in athletics in her age group and was an above average student, was told her marks were inadequate and she had to focus on academics. After all, she was repeatedly told, a lot did hang in balance; it was a crucial academic year that could shape her life.

With all her leisure activities withdrawn and her parents mounting a vigil on her TV viewing, Raje felt stifled. But her taking a break with Pongal TV specials did not go down too well with her parents. On 17 January, she was left home alone to catch up with her studies while her family attended the Sunday church. When they returned home, it was to find she had hung herself from the living room fan.

Raje joined the Tamilnadu's growing suicide numbers among the teen group. There have been two teen deaths in the month of January and last year, police say 19 children below the age of 15 ended their lives, mainly due to academic pressures. The state's high levels of suicide rate among young women, between the ages of 15 and 19, got the attention of British medical magazine, The Lancet, no less.

Sampling a population of 108,000 near Vellore, (around 200 km from Chennai), a team led by Christian Medical College researchers said between 1992 and 2001, suicide rates among the young people, especially young women were high. Studying 20,000 persons in the age group of 10 and 19, the team established an average suicide rate of 148 per 100,000. 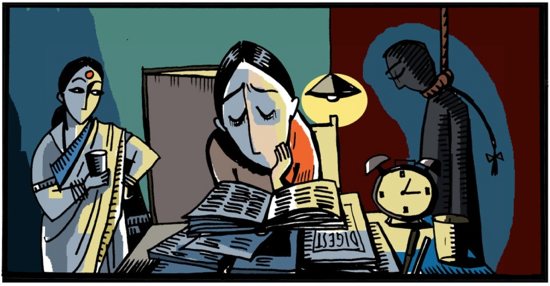 This compares to just 2.1 suicides per 100,000 in the same age group in the UK. While elsewhere globally suicide was the fourth leading reason for deaths, in Tamilnadu it has become the chart topper.

Childcare specialists are now changing the way they look at teen suicide - from a uni-dimensional performance anxiety-oriented issue to that of a poor overall development environment for a child, at school and home.

On June 12, 2003, Ramu Abhinav, a 15-year-old in one of the leading chain of schools in Chennai, hanged himself from his mother's saree. The previous day, in the very beginning of the academic year, his mathematics teacher had hit and verbally abused him for being slow. Even as the focus then stayed on the evils of corporal punishment, academicians have now learnt that pressure on children to score high should be moderated, both by parents and schools.

K Selvakumari, a class 11 student of a government school, hanged herself on December 8, 2004 apparently because of a chemistry teacher scolded her for stealing. Children with discipline or behaviour problems usually have other concerns like familial discord, domestic violence or abuse as underpinning causes, which are going unresolved. On Selvakumaris death, childcare experts all agree that it could have been more than just the last act that provoked the suicide.

Sr Leema is the Head Mistress of St Francis Xavier Middle School. She believes that as adults it should be the teachers who should step in absorb this anxiety and not let it pass on to the students. "More often, teachers get caught up with the academics part of their work; they fail to establish a rapport with their students. Children with depression often come with low self-esteem or from dysfunctional families and are often victims of neglect. If teachers were to recognise these symptoms and tailor their approach differently to each student, teen suicide could be effectively stopped," says Sr Leema.

In 2003, 13 children in Chennai ended their lives because of poor performance in examinations and nearly 200 did so in the state.

In her school, a unit of a chain of schools run by the Roman Catholic church, Sr Leema has implemented a system of biographing the life of every student, by themselves and by the teachers so that teachers know all about their wards.

Help could also be sought from counsellors to address the increasing stress level in schools and at homes. Poornima Muralidharan, a counsellor at the A M M Matriculation school, considers the lack of positive role models for stress management at home in their formative years as a very critical reason for many students failing to adapt to demands on them.

"Stress is not necessarily an evil thing; it can often push students to better performance. What could help is positive parenting skills that open communication channels. If a child were to see either of her parents react violently or negatively to stress, that is the lesson she is going to learn for life," she says. Yet, Sr Leemas school is among a handful that works on positive parenting skills by conducting workshops for parents. Or even teach students how to manage time better or to take non-academic stress in their strides.

This difference between needs and resources is proving costly to the students. Up to 15 per cent of those committing suicide in TN are children, says P V Sankaranaryanan, Director of Sneha which runs a helpline for children during examination time. According to the 2001 census, 19% of Tamilnadu's population constitutes children and teenagers (10-19).

In 2003, 13 children in Chennai ended their lives because of poor performance in examinations and nearly 200 did so in the state. Many more have gone unnoticed as they have been reported as accidental death or death under suspicious circumstances. This under-reporting has its roots in the fact that depression and suicide still has stigma attached to it.

Corporal punishment and verbal insults apart, sexual abuse of children is also fast emerging as a major concern. A nine-year-old girl (Juvenile Justice Act of 2000 mandates that minor victims of sexual abuse not be named) was repeatedly abused by her physical education teacher in the school's common toilet. Once her parents went public, other girl students joined the chorus.

The State Women Commission stepped in, recommending that schools in violation of facilities such as separate toilets for the two sexes and for teachers and students be derecognised under the provisions of the Tamil Nadu Private Schools Regulation Act. A December 2004 public hearing held by the commission brought to fore the same demands. But even as the SCW repeats these mock trials - the culprits themselves slip through cheekily.

A corrupt monitoring system - the education department and the clamour for English medium education - has ensured that schools which flagrantly disobey rules continue to flourish. Those perpetrators who are held responsible for child abuse get away with a light rap such as transfer to a different school or simple imprisonment due to the absence of stringent laws to prosecute sex offenders.

But the SCW is not a statutory body and its recommendations, though presented to the state government, have never been placed before the legislative assembly and debated upon. With its own status watered down, the commission's efforts to ensure the safety of girl children in school have become an exercise in futility.

On the other hand, organisations such as Tulir (for abused children based in Chennai) are working with schools to create a zero-tolerance approach toward all forms of abuse in schools. A counsellor at Tulir, Alankar Sharma, says Child Protection Policy in schools against physical, emotional and sexual abuse is necessary. By giving the child age-appropriate information and working with the parents, children could be empowered to protect themselves and if they have faced abuse, even heal," he says. Yet again, only a few schools have started implementing a protection system and train their teachers appropriately.

However, if the stressor is unattended and stress unmitigated, students could end up paying a high emotional and medical price. Poornima says the more aggressive among the children with unresolved issues could end up being bullies in colleges. This could only bring to mind the recent suicide of a 19-year-old engineering student Mohan Karthik Tripathy in Chennai's outskirts after a rowdy round of ragging by his seniors. Scores of other such cases are known to slip through the net. Then again, adolescence stress could end up advancing age-related medical problems to the 20s, says Poornima.

How about the matters of the heart? Take the case of Vallarasan: he confesses to have been in love for four years with his classmate. He is all of 12 and depressed that his emotions are not requited. Media representation of teen love that does not say the entire story has left many a teenager confused, says Sneha's Sanakaranarayanan. Failure in romance does feature very high in the list of reasons why teenagers call up the helpline.

In the eventuality of increasingly problematic adolescence, the community should step in to help children handle stress better. Sankaranarayanan says if the most important causative factors of suicide - sense of abandonment - were to be removed teen suicide would decline. A relationship of trust established with an adult, a teacher, parents or even counsellors, he says, will help the child bounce back from any set back in life.

Krithika Ramalingam is a Chennai-based development journalist. Some names have been changed to protect identity.