What we should score Arun Jaitley on

As the country eagerly awaits the new government’s maiden budget, Shankar Jaganathan evokes the realities of the Indian economy to provide a reference framework within which to judge the Jaitley budget.
09 July 2014 -

New beginnings are always exciting to look forward to for they have the potential to chart unexplored territories. New beginnings with high expectations only compound this excitement by adding to the surprise, or shock, that they can deliver. The Union Budget 2014 scheduled to be presented by the new government this week is an event which meets all these criteria making it an event of great significance for every Indian.

Each one of the distinct constituencies -- the industrialist, stock market investors, salaried class, consumers and the poor, all have their own expectations from the Finance Minister. What makes it more complex is that in many instances, the desire of one contradicts the need of another. Given this state, how can we view the budget that is presented?

A budget has four distinct components—revenue generation strategies adopted, investment focus, the quality and quantity of fiscal deficit and the impact of these three on the overall economic environment. Each one of these components will reflect a different facet of the new government’s thinking. While one initiative in the short run could dampen the effect of another, in the long run most of them are expected to strengthen each other, realising the social and economic goals of the party in power. 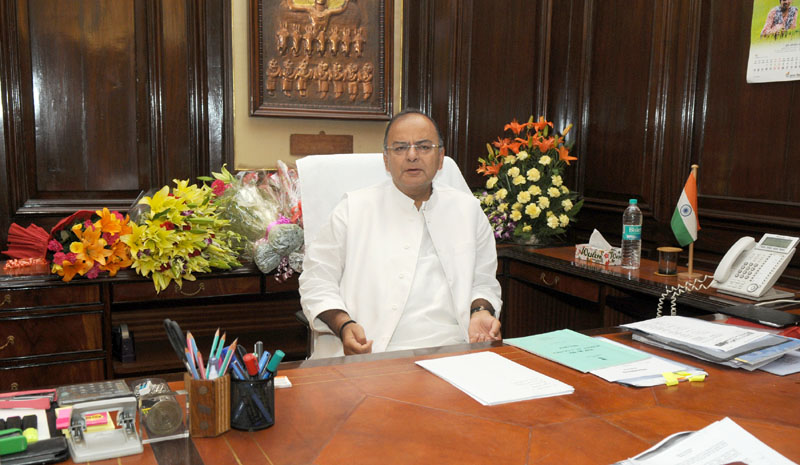 Arun Jaitley taking charge as the Union Minister for Finance in New Delhi on 27 May, 2014. Pic courtesy: pib.gov.in

Of inflows and outflows

In understanding the new government’s intent, revenue mobilisation is a good place to start. Both the quantum and the sources of revenue mobilised have tales to tell.

Without adequate taxes most of the dreams we have for a better India will remain only so; hence an increase in tax to GDP ratio, if seen in this budget, is to be commended.

India is a country witnessing growing inequality, where the pace in growth of dollar billionaires is matched only by the growth in farmer suicides and children with malnutrition. Our constitution mandates the creation of a society where disparities are at a minimum. Hence, any increase in share of direct taxes in total taxes must be viewed positively, as it serves to reduce inequality.

A step in this direction would be to increase tax collections from the rich. Multiple options can be used including, but not limited to, introduction of a new tax slab rate of say 40 per cent for income above Rs.20 lakh, introduction of inheritance tax on wealth over Rs 50 crore to start with, and a more effective mobilisation of wealth tax by taxing more than two residences owned by an individual.

Taxing wealth representing speculative real estate investments will not only reduce speculation, but also increase availability of shelter for the vulnerable.

Turning to outflows, investments in social and physical infrastructure constitute a critical part of the same. While inefficiency in administering subsidies is a matter of grave concern and needs to be addressed on priority, this excuse should not be used to reduce the overall amount of subsidies.

Reduction in subsidy prior even before we have achieved efficiency in subsidy administration will only make matters worse, especially for the vulnerable and will push India further down from its already dismal ranking on the Human Development Index. Increases in budgetary outlays for food security, education and health are to be hailed for precisely this reason.

To top it, increase in subsidy administration efficiency will contribute to the much required improvement in India’s ranking on the aforementioned index.

When deficit is good

Over the last two decades, the importance given to the quantum of fiscal deficit has grown to a point where the contours of its quality have receded to the background. It has become quite fashionable to frown on fiscal deficit, regardless of the factors contributing to it.

The only exception in the recent past was in the years 2008 and 2009 when wealthy countries, one after another, disregarded financial prudence to bail out the illiquid financial sector from their self-inflicted woes through doles to the tune of a few trillion dollars.

Taking note of the selective discretion used when faced with a financial crisis, we need to look at the quality of fiscal deficit and not focus only on its quantum in arriving at any judgement on the Union Budget. Higher fiscal deficit, if backed by investments in social and physical infrastructure, should be greeted and welcomed with open arms. In fact, the quantum of fiscal deficit can also be seen as an indicator of the urgency with which our government wants to resolve critical social issues.

Having made all these points, it is also important to note that while looking at the different parts of the budget is important, its overall impact cannot be ignored. The tone set by the budget is critical for the overall economic environment. A conducive economic environment is a critical need given the declining rates of economic growth. Steps to simplify taxes and make them clear, stable and beyond dispute is as important as promoting businesses that create infrastructure and generate employment.

While every optimist hopes for the ideal budget, the realist knows that balancing is the key to presenting a successful budget. What is sacrificed tells a lot about what the intent is. So what will this budget of the new government tell us? It won’t be too long before we find out.