Polyvinyl chloride or PVC is all around us. It is one of most versatile of plastic materials and its global production is at 40 million tonnes a year. Yet, PVC products are being phased around the world, and India may need to follow. Rasika Dhavse has more.
20 May 2007 -

What's common between consumer articles such as magnetic stripe cards, gramophone records, toys, packaging construction material and house fixtures such as flooring, window frames, pipes, venetian blinds, cable and wire insulation, and medical disposables such as IV bags? It's polyvinyl chloride, commonly abbreviated to PVC or simply known as vinyl  a chief component in the manufacture of all these articles and many more.

PVC is all around us, in an amazing range of uses. Its global production is at 40 million tonnes a year. It is one of the most versatile of plastic materials that pervade modern society. Less known about PVC is that it is also the most dangerous. Throughout its entire lifecycle  from production to disposal  it poses direct risks to environment and human health. 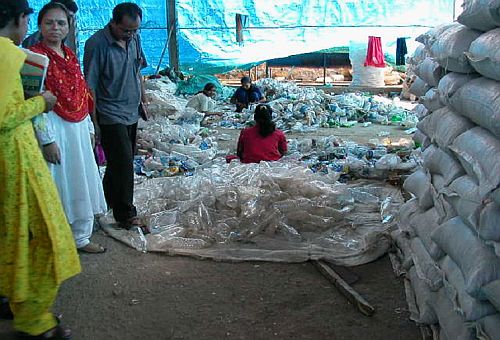 Almitra Patel, Member, Supreme Court Committee for Solid Waste Management, presented the hazards of PVC at two Asia Pacific International Conferences on Recycling of Plastics', at Mumbai and Delhi in February this year. "This presentation on PVC was just to test the waters in the plastics industry and I was amazed at the public appreciation of my position," she says, adding that only one speaker had come come up and privately expressed different opinions.

All stages of the PVC lifecycle involve toxic discharges. Pure PVC is 57 per cent chlorine; out of the total global industrial chlorine usage, 40 per cent goes into PVC production. PVC production involves many toxic chemicals; either to make the PVC itself or as additives to make it useable or as emissions from the various processes by which it is made. During use, these toxic additives can leach out into the ground water. PVC needs phthalates as plasticisers, which can cause health problems such as infertility. Vinyl chloride monomer leaching out of PVC food packaging can cause liver tumors.

The disposal of PVC causes further environmental problems. PVC does not biodegrade as it is not a natural material. When burned, it releases an acidic gas in addition to toxic dioxins. If landfilled, it eventually releases additives that can threaten groundwater supply. Landfill fires can release even more deadly toxins. In India, waste is often burned by the roadside or at open dumps and this can pose a major health hazard due to the PVC content in the garbage. Use of city waste as RDF (Refuse Derived Fuel) burnt for power is also dangerous as PVC cannot be fully removed from wastes. Fires in buildings and vehicles also release dioxins.

Use of disposable PVC blood bags in health care is rampant, and though alternatives are readily available, they are costlier.

PVC poses a problem for recyclers too. It increases the toxic impacts of other discarded products like computers, auto parts, coated paper during recycling. It presents a health hazard for those handling and recycling electrical cabling. PVC's variable formulations make it difficult to recycle all PVC economically.

Keeping some and removing most

PVC has its uses too. Eighty-four per cent PVC is used in long-life items like piping and construction industry. PVC pipes are corrosion-resistant, easy to install and give low friction flow of liquids. PVC in electric cables doesn't burn, though its HCl gas release in fires can kill many. Twenty-five per cent of medical plastics use PVC; they are flexible, transparent, low cost and bio-compatible. Keeping in mind the uses of PVC, Patel is quick to add, "No, we don't want to eliminate PVC completely at one shot; its long term uses for irrigation piping, electrical wire insulation and conduits can continue for some time as these don't enter the waste stream for 10 to 20 years, though they are a polluting disposal problem."

She adds that long-life uses of PVC do end up being recycled. For example, discarded electrical wires are stripped to recycle both copper and insulating PVC covering to again make (sub-standard) electrical wire insulation. PVC collected in south India finds its way to Bangalore for onward shipment to Delhi where most of the wire recycling is done. PVC is also recycled into smooth rigid irrigation piping, an attractive use because of its low friction resistance to water flow. Suppliers of PVC rolls of flexible lay-flat irrigation piping do offer to take back the punctured and discarded piping and replace it with half the quantity of new piping. "So such long-life use of PVC is not much of a problem; it is the use-and-throw, one-time use of PVC that needs to be stopped," Patel reiterates. Producers of virgin PVC granules must be surveyed to learn "what percentage of their offtake goes into one-time-use items and what are the most cost-effective alternatives for those items without major equipment changes," says Patel.

Patel directs our attention to medical use and throw applications like blood bags, which continue to be rampantly used though alternatives are readily available, albeit costlier. PVC need not be used in use and throw items like bottles, food, water and medicine packaging, stationery, labels, toys, footwear and consumer goods. Replacing PVC with other plastics does not cause labour or technical problems. We need to emulate examples like Switzerland, which banned PVC bottles in 1990.

PVC being phased out in other parts of the world

It is increasingly being felt that the benefits of PVC are no longer worth the risks to health and environment. Communities around all PVC production plants, even in the United States, suffer serious toxic pollution of air, surface and ground water. No wonder then, non-critical uses of PVC are being phased out by governments, cities, builders and industries.

Six German states, 62 Spanish cities, the Sydney Olympic village are PVC-free. Even auto giants like GM, VW, Honda are removing PVC from cars. In the United States, the US Navy and Air Force as well as NASA are eliminating PVC. New York and San Francisco have banned PVC pipes and many architects all over the US have vastly reduced their use of PVC in walls, floors and roofing. Twenty countries have banned phthalates in toys for children below three years. The environmentalist group Greenpeace has advocated the global phase out of PVC because of the dioxins produced as a byproduct of vinyl chloride manufacture and from incineration of waste PVC in domestic garbage.

Phasing out in India

Patel insists that industry cooperation is a must if we want to phase out PVC. Organisations like the Indian Plastics Institute should take the lead in replacing non-essential, non-durable PVC with easily recyclable options. Meanwhile, we can begin with steps like replacing soft drink bottle wrappers with paper or no-wrapper printing and eliminating all hidden toxics like PVC from multi-film packaging. Non-PVC plastics are competitive for medical use after volumes build up.

"We also need producer responsibility, e.g., take back schemes to collect this waste easily for recycling or use in bitumen roads," says Patel. "Our Ministry of Environment needs to prepare a paper on PVC uses, hazards and phase-out. Economic instruments (tax, excise waivers, low interest cost for producers of alternatives based on quantities produced, etc.) would also drive the switch. Also, if big hospitals need international certification, PVC-free may be a precondition," she concludes.

Patel is confident that through widespread discourse and campaigns by environmental groups, awareness about use-and-throw PVC will gradually increase, thereby leading to its judicious use and consequent phase out.

Rasika Dhavse is a freelance journalist, and is an associate copy editor at India Together.