Another step towards Parivartan

Ration shopkeepers won't divulge their records, Food Department officials wont file complaints, and the police wont act on their own or accept complaints from the public. But the cycle of corruption can still be broken.
01 August 2004 -

Regular India Together readers will recall the Delhi based NGO Parivartan's crusade towards effective implementation of the Right to Information (RTI) Act vis-a-vis the Public Distribution System (PDS), among other aspects. In the last three months, a number of people from different parts of Delhi have filed applications under the Delhi Right to Information Act and sought the records of their ration shopkeepers. While the results are encouraging at this end, the question of the corrupt ration shopkeepers criminality  as perceived by the police and the law  remains unanswered.

More than 250 people from different areas have filed RTI applications so far. The people received records in Kalyanpuri, R K Puram, Bhatti Mines and Anna Nagar. In other areas, the shopkeepers have approached Delhi High Court and have obtained stay orders. In the last few months, Delhi High Court has granted stay in almost 133 cases saying that the records should not be made available to the public till the disposal of these cases.

However, in most of these areas, merely seeking of records has forced the ration shops to at least open  given that earlier many shops were simply kept shut. In a number of these areas, the people have started getting rations which they were not getting earlier. The shopkeepers are coming to these areas and publicly apologising for their past mistakes. But as Parivartan rightly frames the big question  how long will this last?

The records reveal several long-standing discrepancies. According to Parivartan officials, not only are the records in a state of total disarray, the stocks do not tally, sales registers are incomplete and bogus entries have been made. More than one card has been issued to the same person. Surveys in some areas reveal diversion of more than 90% of the stocks. 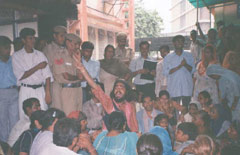 Picture: Parivartan officials in one of their demonstrations demanding greater transparency in the PDS.

The Public Distribution System is governed by the Essential Commodities Act. Any offence under this Act is cognizable and an FIR should be registered in each case. There is no doubt that strong action should be taken against the shopkeepers. They should be tried and sent behind bars. However, the response of the Food Department in all these cases leaves a lot to be desired. The shops have been temporarily suspended in some cases. However, no steps have been taken by the Food Department to file criminal cases, offers Arvind Kejriwal of Parivartan.

The Food officials have a crucial role in ensuring that the food records are in order. The Food Inspector is supposed to inspect and check records of each shopkeeper for the past month before allowing sale of material for the following month. The Enforcement Wing of the Food Department does a thorough investigation of the records of every shopkeeper every six months. However, in what seems to be too much of a coincidence  such glaring discrepancies were missed by all these officials  implying either a criminal negligence of duty or an active collusion.

According to the Essential Commodities Act, a shopkeeper faces imprisonment for a minimum of three months and a maximum of seven years if he keeps his shop closed, does not issue rations properly to the people, siphons off supplies etc. But for this to happen, it is necessary that the police lodge an FIR and file a case before the magistrate. According to the Joint Commissioner of Police (Crime), the police would file an FIR only on a reference from the Food Department and would not entertain any complaint from the public. The Food Department, on the other hand, rarely approaches the police because Food officials themselves are involved in every case of theft. One cannot expect the Food officials to lodge an FIR against themselves.

The catch of course is  who will take the problems to the courts? Neither the Police nor the Food officials are willing to lodge an FIR regarding these discrepancies. Whom does the common man approach?

The catch of course is  who will take the problems to the courts? Neither the Police nor the Food officials are willing to lodge an FIR regarding these discrepancies. Whom does the common man approach? In order to tease out answers to such questions and to hear testimonies of the people, Parivartan organized a Public Meeting on 31 July 2004 at Gandhi Peace Foundation inviting not just ration seekers but also officials from the Food department, Delhi government, Delhi Police, eminent citizens and legal experts.

In the hope that government accountability and punishment to the culprits is the rule and not an exception, a resolution was passed at the Public Meeting mentioned above. First, the resolution recognized that the Food and Supply department has no procedures to adequately deal with various food complaints. A committee is proposed to be set up under the chairpersonship of the Public Grievance Commission. The committee will comprise representatives from NGOs, Food department etc. and make recommendations on how grievances related to PDS can be handled and prescribe penalties for corrupt officers.

Second, the State government should direct the Police to register an FIR even on complaints from the public. Third, the Essential Commodities Act and the PDS Control Order list several offences for which a criminal case needs to be filed. The duty of the Food officials is not to decide the gravity of the case but take the case to the Police who in turn can present it before the Magistrate, who decides the level of criminality of the case and imposes punishment.

Fourth, the PDS Control Order stipulates that the ration shopkeepers submit records to the Food department. Until now, they have not been submitting their records on the pretext of having lost them. However, it should be made mandatory for the shopkeepers to submit their records so that the Food department has them when the public demands the records.

Fifth, the application and inspection fee under the RTI is exorbitant for the poor people and should be reduced. Sixth, the stock arrival position (quantity and date) should be displayed on the notice board of every Circle Office. Seventh, in an appeal, the State government is asked to increase the commission of the ration shop keepers  which is unanimously considered low  so that they can lead an honest life, if they so wish. Lastly, the Central government is appealed to abolish the upper limit of the number of BPL card holders (presently numbering just about 4 lakh). Anyone who goes to the ration shop should be granted a card after verification of their financial background. Moreover, the cards in the Above Poverty Line (APL) category  most of who do not pick up their ration  should be abolished.

The Meetings success has been twofold: the gathering managed to pass a resolution, the implementation of which Parivartan will now take up. The procedures proposed, if adequately implemented, will lead to much transparency in the PDS. Also, the Meeting sensitized those decision makers to the intricacies of the problem whore very much part of the rigmarole without actually being sure of their powers of authority and discretion, most of which are either underused or misused. For now, the realization of the draft resolution is something to be followed with bated breath.